Mobilux is set to acquire Conforama France in a merger that will create France’s largest omnichannel furniture retail group. 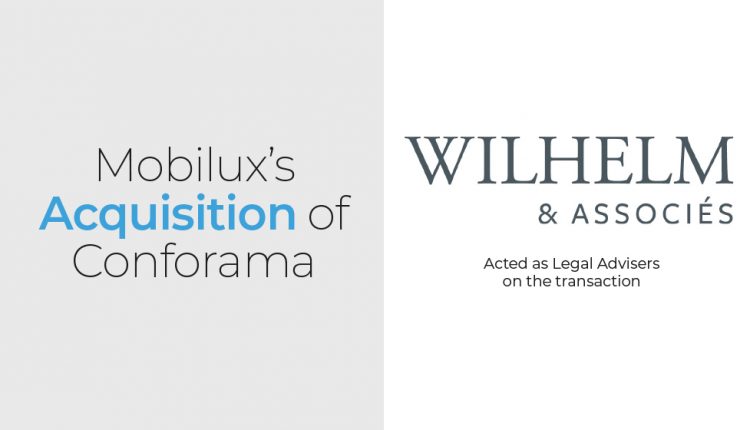 Both companies will continue to operate independently under common ownership.

Mobilux is the holding company of Clayton, Dubilier & Rice (CD&R) portfolio company BUT. Through this merger with Conforama France – a subsidiary of Steinhoff International and a leading furniture, decoration, electronic goods and appliances retailer – the combined organisation is expected to be the highest revenue earner in the French home furnishings market, with a network of almost 500 stores. The organisation will also be able to leverage both companies’ geographic coverage, further strengthening market leadership in core furniture categories and a myriad of other home equipment products.

The merger will also bolster CD&R’s strategic partnership with WM Holding, an affiliate of XXXLutz – Europe’s second-largest furniture retailer. XXXLutz and CD&R own BUT in a 50-50 partnership.

Lawyer Monthly had the pleasure to speak with Pascal Wilhelm, Founding Partner at Wilhelm & Associés to give us some further insight into this transaction:

Can you tell us more about the part you played in this acquisition?

Our role in this case was very significant and unusual regarding the fact that the proposed transaction was agreed by Mobilux (BUT’s parent company) and Conforama France in a specific context, namely the important financial difficulties faced by the Conforama Group and Conforama France, which were exacerbated by the COVID-19 outbreak.

As the turnover of the companies has a European dimension, the transaction was to be examined by the European Commission. Our first aim was to ask the European Commission for a referral. The referral procedure, provided for by EC Merger Regulation, enables the Commission to refer the examination to the national authority which knows better how to assess its effect on competition when the merger “threatens to significantly affect competition in a market within that Member State, which presents all the characteristics of a distinct market”. Since Conforama France is only active in France and that retail markets are traditionally considered to be, at most, national in size, we requested a full referral of the proposed transaction to France.

On June 26, 2020, taking into account the exceptional nature of the situation, and only four days after the submission of our prenotification, the Commission decided that the conditions for referral to the FCA were met, as the FCA is best placed to review the transaction given its national impact and the FCA’s experience in reviewing mergers in this sector. Therefore, the Commission referred the transaction in its entirety to be examined by France.

Only four days after the submission of our prenotification, the Commission decided that the conditions for referral to the FCA were met

Since the beginning of this case, we strongly believe that the three cumulative criteria for the application of the failing firm exception would be met, and we provided all the required information in order to help the FCA to complete its competition analysis.

What professional skills and experience did  you and your team bring to the transaction?

Our skills regarding the distribution sector have been useful in quickly identifying the potential competition issues related to this case. Our experience in this field led us to encourage our client to continue its efforts in support of the furniture sector.

Our previous experience in the Fnac/Darty case allowed us to point out the impact of the online sales growth on the furniture market very early.

Did any significant challenges arise during the process? If so, how did you overcome them?

The biggest challenge in this case was to convince the FCA to apply the failing firm exception for the first time. This faculty had been rarely used in Europe given the very strict nature of the assessment criteria (this option had been applied once by the Conseil d’Etat, in 2004, in a decision regarding the merger between Seb and Moulinex).

The stake was high for our client considering its financial situation and our aim, in order to overcome the FCA’s potential reservations, was to provide the FCA with motivated arguments to allow it to check whether the conditions laid down in the Seb/Moulinex decision approving the application of the failing firm exception had been met in the present case.

What impact do you expect this deal to have on the furniture retail sector in France and Europe more widely?

This deal will have a strong impact on the market definitions in the furniture retail sector. The FCA considered that it was no longer relevant to retain a global furniture market but that this market should be segmented into six major product families (furniture, upholstered furniture, bedding, kitchens, bathroom furniture and dressing rooms). The FCA also considered that it was appropriate to segment by price range. Lastly, the FCA considered that sales in physical stores and online sales of furniture products belong to the same market, in line with previous decisions such as that of 2016 concerning the merger between Fnac and Darty.

Furthermore, in this transaction, the FCA took into account the COVID-19 crisis and its consequences on the furniture sector. This is a strong message which demonstrates the FCA’s capacity to adapt its decision-making practices to the market changes.

In what sense does your work on this acquisition fit the profile of your law firm?

At Wilhelm & Associés, we have several areas of expertise, such as real estate, litigation and distribution cases, and a large part of our activity is dedicated to merger control cases. These cross-cutting subjects provide genuine added value for our clients.

Do you expect to work on similar transactions in the second half of 2022?

Yes, for two reasons: on one hand, several sectors have been impacted by the economic crisis and some mergers may be necessary to maintain a strong offer in some sectors of activity, and, on the other hand, the redefinition of the market products could also encourage other actors to broaden the services they offer to consumers through an innovative project.

DealsM & A
By Pascal Wilhelm On Jun 30, 2022 0
0
Share FacebookTwitterGoogle+EmailPinterestLinkedinTumblr