Studio Legale BL has advised on the multifaceted sale of the Hotel Imperiale in Forte dei Marmi, Tuscany, on behalf of the property owner, Marbles. 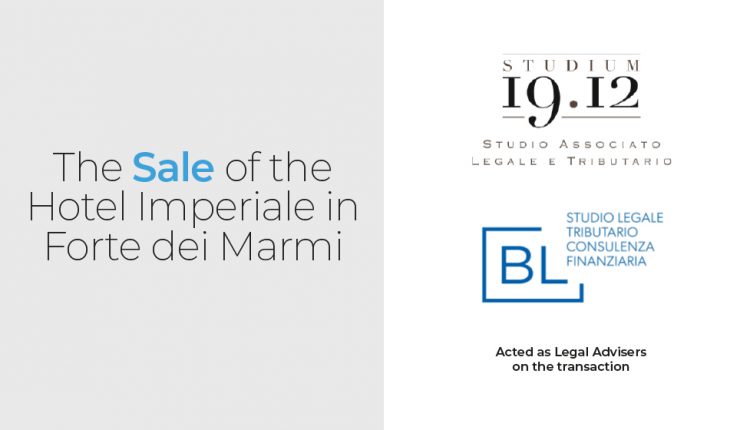 The building is a prestigious five-star luxury hotel located in the centre of the sea town, which is a known tourist resort. The hotel was sold to an international investor after receiving interest from several operators in the sector, demonstrating the attractiveness of the venue.

The deal was coordinated by Emanuele Boschi, partner at Studio Legale BL. Studium.1912 also advised on the deal.

Lawyer Monthly had the pleasure to speak with Emanuele Boschi, Partner at Studio Legale BL to give us some further insight into this transaction:

Please tell us more about the acquisition, who was involved and what it entailed.

The target for the acquisition was a five-star luxury hotel in the centre of Forte dei Marmi, one of top European destination for leisure. The deal involved both the transfer of the hotel managing company (OpCo) and of the real estate asset (PropCo), with the settling of existing claims and super senior debt and a full non-recourse guaranty for existing debts on the seller’s side.

A private entrepreneur was on the seller side, while the buyer was an international investor with a solid track record in the luxury real estate sector, both on residential and hotel asset classes.

What was your own role during the transaction?

As Studio BL we represented the seller side. After a seller-side due diligence, we defined the proper transaction scheme and started to negotiate with the main super senior creditors in order to kick off a reverse inquiry on the market and shortlist a group of potential investors. We have been involved in the financial, legal and tax aspect of the transactions, which were organised as a twofold transaction: first both OpCo and PropCo were moved under the same legal ownership and then the disposal occurred.

What professional skills were you called upon to exercise? Did you face any obstacles during the transaction?

As in any transaction involving a private individual on the seller side and an international investor on the buyer side, the first challenge was to establish a common field of discussion and have all the involved parts accept a clear road map from initial interest to execution day.

In this specific transaction we faced two main obstacles. The first was to make possible the transfer of both OpCo and PropCo as a single transaction without incurring in any recourse on the sellers. The second main challenge was to collect super senior approval of the transaction and avoid any change of control pre-payment, which could have created a bottleneck on the asset disposal.

Thanks to our expertise in both private and institutional investors’ operational rules and business habits, we have been able to execute a very complex transaction involving seven different contracts with multiple stakeholders while avoiding any interruption in the hotel operations.

DealsM & A
By Emanuele Boschi On May 31, 2022 0
0
Share FacebookTwitterGoogle+EmailPinterestLinkedinTumblr