The MediaSchool Group’s Acquisition of the IFC Group

The MediaSchool Group, supported by the Florac investment fund, has acquired the IFC Group, one of the main private higher education groups in the south-east of France. 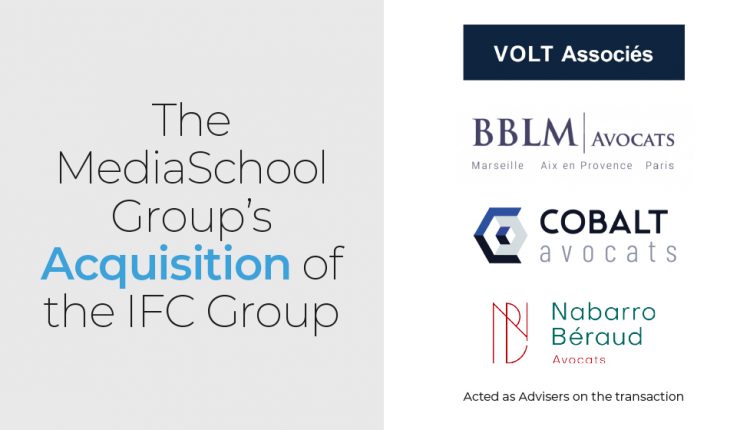 MediaSchool is a France-based international leader in private higher education in communications and digital and media professions, spanning 45 schools. This new acquisition expands the MediaSchool Group’s presence to six new cities – Saint-Etienne, Valence, Avignon, Nîmes, Alès and Perpignan – and strengthens their existing presence in Marseille and Montpellier. It also allows the Group to achieve its goal of reaching 10,000 students, a target originally set for 2024.

IFC is a French group of specialised higher education institutions which has succeeded in developing from BTS to Bac + 5 since its founding in Avignon in 1990. Today it oversees more than 2,500 students across eight regional cities.

Eric Dupressoire, Chairman of the Group, was advised on the deal by Elias Abou Jaoudé and Stéphane Castelain, partners at Cobalt Avocats (following the merger between notably Haussmann-Paradis and Sextant Avocats).

The MediaSchool Group was advised by De Pardieu Brocas Maffei and Volt Associés. Also involved in the deal were iXO Private Equity (majority shareholder of the IFC Group) and OBSA holders, advised by BLM Avocats and Nabarro Béraud Avocats respectively.