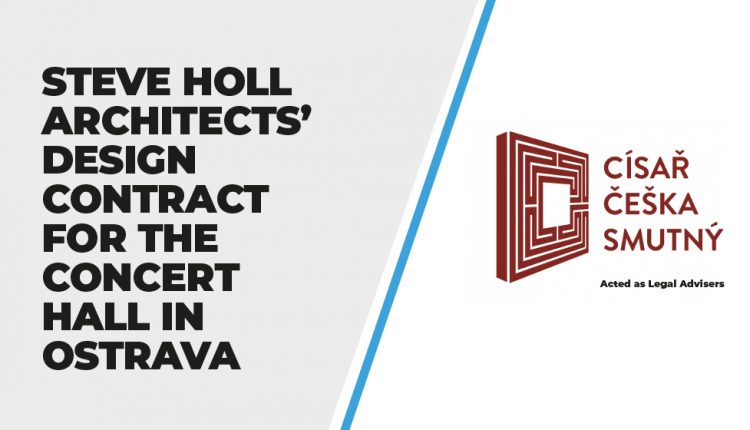 Can you tell us more about your team’s involvement with the negotiations?

Jaromír Císař: The negotiations regarding the contract with Steven Holl Architects lasted for over a year, because both parties had vastly different views on the terms of collaboration. We also encountered big differences between Czech and American legislation. The aim was to find common ground between them and, as a result, a common language between the two sides. Of course, you cannot do without mutual compromises, and it was not only these that both legal teams worked hard on.

What expertise did your team bring to the deal?

Martin Krajčovič: Our expertise was absolutely essential, because the City of Ostrava has not had much experience with preparing contract terms based on an architectural competition, moreover with a foreign partner. During the contract negotiations, we had to make use of our previous experience and also become involved in consultations concerning purely technical matters as well. In short, we had to make sure that no matter the difficulties the project of this scope would undoubtably encounter, the contractual mechanisms, at least in general terms, would take them into account and the project execution would not be unnecessarily hindered.

Milan Kučera: Additionally, we had to capture all the fine details of the construction specifics of the project and give form to them in the language of the contract. At the same time, we had to be sure that there would be no problems with their subsequent use, especially in face of very strict public procurement legislation. Our aim was to achieve maximum flexibility and keeping the administrative burden to a minimum for both parties.

How did your team ensure that the deal was suitable for the Ostrava city authorities?

Martin Krajčovič: Communication with the client was an absolutely key aspect. We had to ensure that the contract between the City of Ostrava and Steven Holl Architects would be objectively balanced, but also that it would respect the existing practices and procedures of the city administration. For example, we had to persuade our client that practical private law processes need not conflict with formal public sector processes.

What factors need to be considered when negotiating on a large urban development like this?

Jaromír Císař: In particular, sustainability and timelessness, which are closely related qualities. It is necessary to remember that the last full-fledged concert hall in the Czech Republic that was completed was the Prague Rudolfinum in 1885. The concert hall will undoubtedly redefine the architectural character of Ostrava’s city centre, and will do so for many years to come. Therefore, it is essential that the project is realised using modern and sustainable technologies. The overall goal is to make the building a cultural heritage of the city for future generations.

Did you encounter any challenges during the negotiations? If so, how did you overcome them?

Milan Kučera: The interests of the city of Ostrava were a priority for us from the very beginning. The contract had to be concluded as soon as possible so that Steven Holl Architects could start the design work. One of the biggest challenges was to ensure that the parties agreed on the parameters of cooperation at least for the initial phase so that the project could start. In the end, we found a way through by entering into two separate contracts. This allowed work to begin on the preparation of the construction study, while at the same time giving both parties plenty of room to negotiate the terms and conditions for the implementation of the follow-up cooperation.

What impact do you expect this deal to have on Ostrava as a city?

Jaromír Císař: The implementation of this project will significantly contribute to the further development of the city of Ostrava and the entire region. The city of Ostrava will thus become one of the cultural centres not only of the Czech Republic, but thanks to its geographical position it will certainly have an overlap with neighbouring countries. It is therefore not just a cultural project, but a truly developmental one, which will undoubtedly have a positive impact on the entire region.

How does this deal fit in the profile of your law firm?

Jaromír Císař: It’s a perfect fit. For over 28 years we have handled a wide range of cases and assembled a team composed of experts in various areas of law and industries of our clients. A project like this is immensely valuable to us. I consider it to be one of the flagship projects of our work that perfectly represents who we are. It allows us to contribute to the cultivation of public space at large and also the cultural scene, which is an area we have long supported through our endowment fund Bohemian Heritage Fund that brought together many enthusiastic private sponsors of art and culture and successfully supported many initiatives.