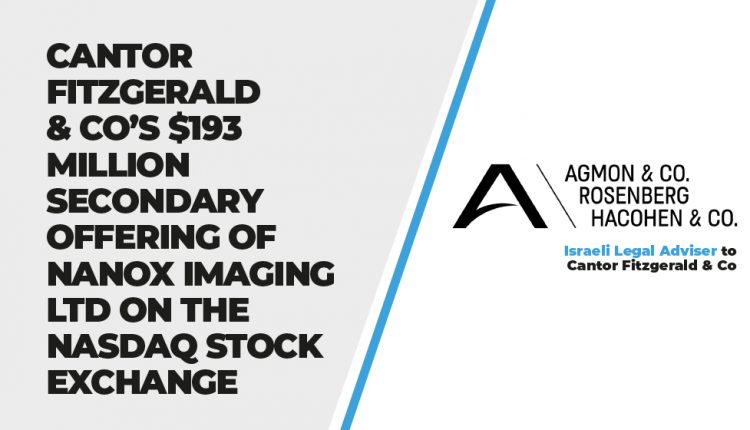 Nanox is not selling any shares and will not receive any proceeds from the sale of its ordinary shares being offered by the selling shareholders. The proposed offering is subject to market and other conditions, and there can be no assurance as to whether or when the offering may be completed, or as to the actual size or terms of the offering.

What complications can arise during a public offering like this one?

From a legal perspective, there were two major complications that had to be dealt with in this offering. The first related to the need to obtain the proper corporate approvals to allow the offering pursuant to the Israeli Companies Law. The second related to the need to put in place proper legal mechanisms which were aimed at allowing a large number of pre-IPO, non-officer, non-director shareholders to decide whether and to what extent they wish to participate, and if they so wish, to enable them to do so. Both were challenging. The first, in view of the Company’s Board decision that it would be beneficial to the Company to start the process before expiry of existing lock-up undertakings from the Company’s IPO and that at such time external directors were not yet nominated. The second, in view of there being a large number (>120) of shareholders from numerous jurisdictions.

How do you work with your clients to avoid them?

The main issue is to do a proper and bold analysis of the legal risks and complications involved. Once done, and as exemplified also in this offering, with good and fruitful cooperation between all concerned and innovative and straightforward thinking these and other complications were overcome.

What financial risks are underwriters often concerned about in such a deal?

One of the financial risks that had to be resolved in this offering was the need to cater for withholding tax issues under Israeli law related to the sale by the selling shareholders in the offering. This is a risk that sometimes is overlooked and requires scrutiny and putting in place proper mechanisms to avoid it.

The firm is a powerhouse in the Israeli legal market with an increasingly prominent role in the country’s largest and most significant M&A and commercial transactions.  We represent Israel’s business and economic elite across various industries. Our clients include Israel’s most prominent banks, credit companies, energy corporations, telecommunications and pharmaceuticals companies, industrial conglomerates and entrepreneurs and investors.