Your Thoughts: Trump & US Gun Control 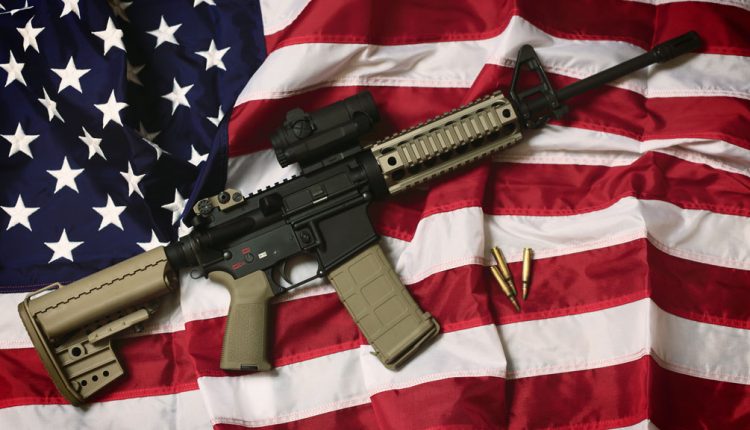 Following the Las Vegas shootings, where 58 people died, much discussion has riled up surrounding US President Donald Trump’s reaction to the massacre, and largely about weapons regulations and restrictions.

The man behind the attack, Stephen Paddock, shot and injured a security guard just minutes before the attack. A full timeline of the tragedy can be found here.

Lawyer Monthly has below heard the opinions and thoughts of several US experts, in the legal and security sphere, on current gun regulation in the US, and the prospect of further limitations.

Now was not the time,” is Donald Trump’s response regarding new gun laws after the largest mass shootings in American history; anemic, to say the least.

As a constitutional historian I believe an individual right to bear arms exists.  At the time of the founding you could buy any gun at any time, even a cannon if you could afford it.  But just as old is gun control.  Regulations on the use and storage of firearms and gunpowder existed throughout the colonies.  And, the region with the greatest tradition of gun control was the deep south, which banned all black people from bearing arms.

In reality, nearly everyone believes in some gun control.  We don’t seriously argue, for instance, that felons convicted of violent crimes should have guns or that anyone today can buy an Abrams Tank.

So, as we face the latest carnage we should keep in mind not only is the right to bear arms an individual Constitutional right, but like all rights we only exercise it in the context of government, the first function of which is to protect our individual security and lives.

Now most certainly is the time to talk about it.

For 83 years there has been a strict ban on the ownership of fully automatic weapons by American civilians.  However it was still legal to own semi-automatic versions of military weaponry.

In 1994 the Congress saw, as matter of national security, to outlaw the sale of assault rifles, because the they saw no purpose in civilians owning weapons with the singular purpose of killing other civilians and their design made it possible to too easily convert these weapons to fully automatic operation.  Although the statute was never challenged under the Second Amendment, other Constitutional challenges were raised, and defeated before the Supreme Court.

That law expired in 2004, and since the sale of the assault rifles has rapidly accelerated.   Thousands of kits to convert assault rifles to fully automatic operation have been legally sold at gun shows.

The 2nd amendment, as interpreted by SCOTUS, grants to individuals the right to bear arms (guns), but the right of the government to place reasonable restrictions on the types of weapons, how they operate and limitations on restrictions of the type of ammunition, or the extent of the firepower of those weapons, have been clearly approved.

Donald Trump has sworn fealty to constitutional originalism. But the Second Amendment might be originalism’s doom.

Rigid originalism would yield no more than a right to possess a single-shot, ram-action musket. Since the framers of the Constitution could not have meant to rule from the grave this way (most conservatives would agree, thereby betraying originalism straight away), we seek a more malleable application of the right to bear arms.

Some originalists say that the historical purpose underlying the Second Amendment – to enable state militias to resist federal overreach – requires that common citizens (would-be militiamen) may possess whatever armaments might be needed to resist the national government by force.

This reading is dubious. First, it would today require that individuals be allowed to possess explosive power that can be measured in megatons – an absurdity the framers could not have foreseen given their primitive technologies. Second, the notion of state rebellion against federal authority was put to a deadly test – and extinguished forever – by the Civil War.

So we must drag the Second Amendment into this century; a citizen may only possess the kinds of “well-regulated” armaments that might reasonably be used by a peaceable civilian for lawful purposes in modern society.

This country needs gun regulation reform.  Problems such as the “Gun Show Loophole” that permit straw-man purchases are unacceptable and without reasonable counter-argument.  But we make a crucial error when we believe that banning certain types of guns or creating stricter regulations to purchase guns will do anything to address gun violence.

Last year there were approximately 15,000 gun related deaths.  Of those, roughly 75 were caused by a “mass shooter.” This number includes the 49 victims of the Pulse Nightclub massacre in Orlando.  Shootings involving an individual indiscriminately killing people made up less than half of 1% of gun homicides in 2016.

Anti-gun lawmakers insist that regulation must address issues such as stricter background checks, high-capacity magazines, banning assault style rifles, and prohibiting silencers. This type of legislation would primarily affect law-abiding gun owners.  It ignores the data that the vast majority of gun violence is perpetrated by individuals with criminal records, in many cases gang ties, and who are in illegal possession of the gun used in the crime.

Despite the overwhelming data that most gun crimes are committed by career criminals, California lawmakers are on the retreat when it comes to laws designed to combat gun crime. Right now a bill sits on Governor Brown’s desk that eliminates mandatory penalties for criminals who use a gun in the most heinous types of crimes, including rape, mayhem, and murder.

If we want to have a significant impact on the epidemic of gun violence in this country then we must be willing to address the problem at its core.  Further legislation targeted at already law-abiding individuals is pointless.  Strong legislation aimed at those who have already demonstrated a willingness to illegally possess and use guns will have a demonstrable impact.

I am a former US Army Infantry Sergeant. Among other duties, I spent time as a machine gunner, and was a certified armorer. Later, I was a civilian volunteer trainer of Squad Designated Marksmen in pre-deployment units. At this point, I am an attorney and adjunct professor. Among the courses I teach at WMU-Cooley Law School is “Gun Control Seminar.”

In our seminar, we break gun control into three main categories: People, Places, and Things. We must spend class time getting everyone up to speed on types of guns in order discuss some of the specifics of hardware regulation, “technical” violations of which can be felonious. In class, I emphasize the fact that gun control law is complex and ever-changing. I caution students that this area of law is never well-settled.

Virtually all modern gun control laws are based either in racism, or as a legislative response to tragedy. This tragedy is no different. Gun control proposals were already being made during the immediate aftermath. Some of them were calls to regulate people: “Crazy people shouldn’t be allowed to have guns.” This area of regulation presents several challenges. First, research shows that individuals with diagnosed mental illness are LESS violent than the general population. Second, many potentially violent, mentally ill people are not diagnosed, or are simply not included in the prohibited persons database used by NICS (National Instant Criminal Background Check System), the system that is used when anyone purchases a firearm from an FFL (Federal Firearm License) dealer. Apparently, the Las Vegas shooter was not a prohibited person.

Some of the calls were to regulate places: “He shouldn’t have been allowed to have guns in the hotel.” Apparently, the hotel prohibits firearms on their premises. However, like most nominal “gun free zones,” there were no magnetometers, or other means of enforcing the policy.

The most concrete legislative proposals are about regulating things: “We should outlaw bump-fire stocks.” Bump fire stocks are like machine guns in that they sacrifice accuracy for rate of fire. The Las Vegas shooter was able to do so much harm only because of the tightly-packed crowd. A simple YouTube search reveals that bump firing a semi-automatic rifle does not require a special aftermarket stock.

In short, none of the recently proposed regulations would appear to have had any impact on the Las Vegas tragedy.

With the exception of the US and Canada, every Democratic nation in the Americas has at some point in its history fallen into tyranny, as have many elsewhere throughout the world such as the Roman Republic all the way through more modern examples of western nations including Germany and France.

Distrustful of human nature, the Founding Fathers wrote the Second Amendment so that should the US Government become tyrannical some point down the line, the people would have the means to resist and protect themselves, and even overthrow the government.

Today, the irony is that the very people who are calling President Trump a tyrant, dictator, and fascist are the same people trying to take away the gun rights of Americans.