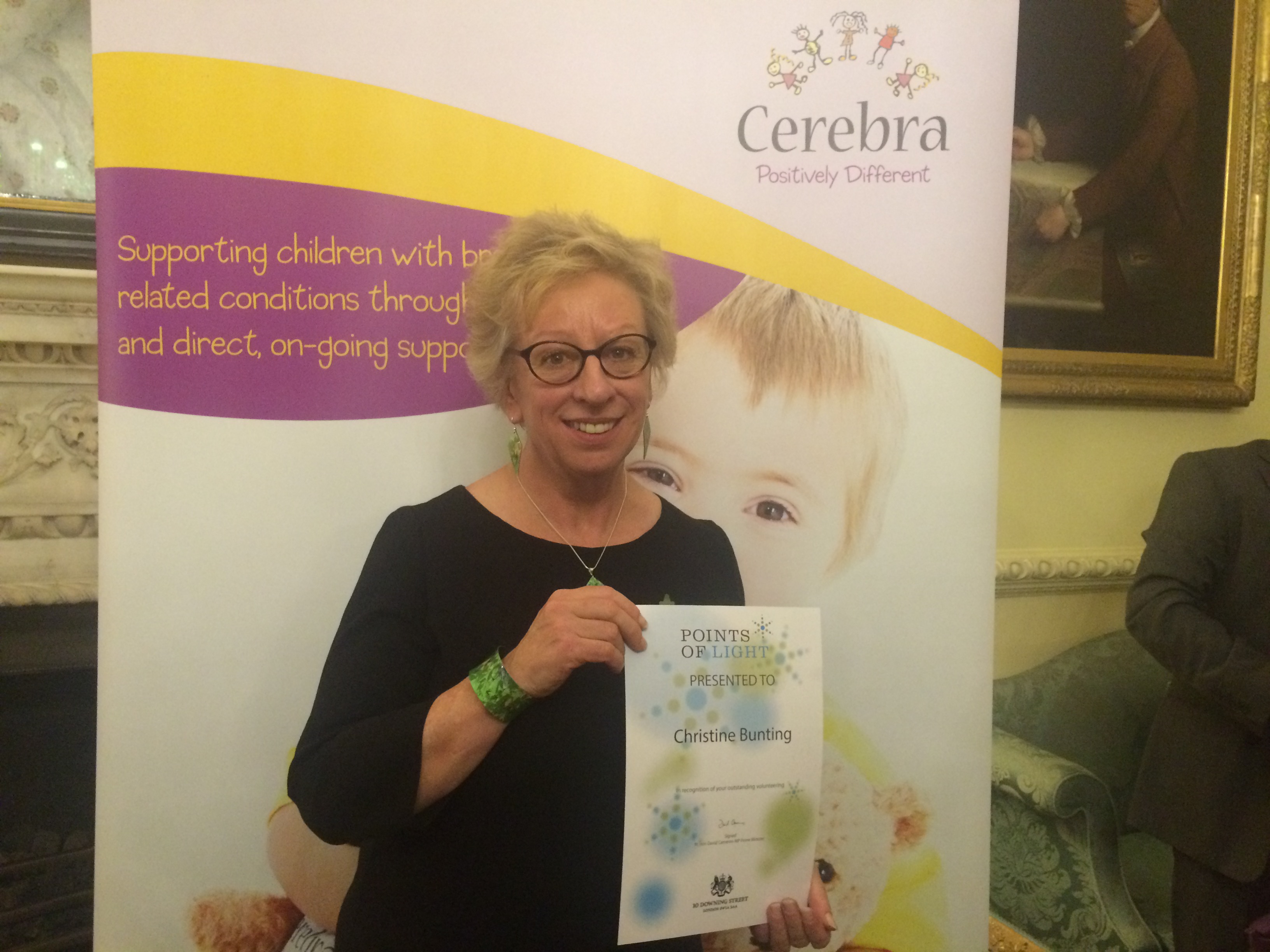 A legal professional using her network to help build a London base for a charity supporting people living with neurological conditions has been named a Point of Light by Prime Minister David Cameron.

Christine was instrumental in setting up the ‘London Minds’ group to support the work of Cerebra, a national charity for children and young people with neurological conditions.  She was aware of the charity through her work at a law firm specialising in supporting people with a mental impairment, and wanted to find a way for the firm to support people beyond their clients.  Christine realised that she could help the charity to access a key audience of potential supporters in London and set up ‘London Minds’.

With London Minds, Christine has united a team of six other professionals based in London who are all committed to raising awareness and support for the charity.  By promoting Cerebra at exhibitions and events Christine has already reached hundreds of people and raised important funds for Cerebra in her first year of supporting the charity.

Christine, a Director in a law firm, is the latest recipient of a Point of Light award, which recognises outstanding individual volunteers, people who are making a change in their community and inspiring others. Each day, someone, somewhere in the country is selected to receive the award to celebrate their remarkable achievements.

“Christine has shown great initiative in helping a fantastic charity to raise awareness and funding for its work in London.  Cerebra is a lifeline for many children and young people with neurological conditions and their families.  By inspiring others to give their time and money, Christine has helped Cerebra to support even more young people, and she thoroughly deserves to be recognised as a Point of Light.”

Christine said:“I am extremely humbled yet incredibly proud to accept this significant award on behalf of Cerebra and its dedicated team of staff and volunteers. I am by no means the only person helping to get Cerebra’s ‘London Minds’ group up and running and to raise awareness in the capital. I am part of a great team of people who are working hard to get the word out that Cerebra is there to provide help and support to children and their families whose lives have been affected by neurological conditions and to give them the opportunity to have a happier, more fulfilled and enjoyable life together.”

Sian Morgan head of Fundraising and PR at Cerebra said:

“We are delighted that Christine Bunting has been chosen to receive this prestigious award. She is such a passionate supporter of Cerebra’s work and has already done so much to help us raise the charity’s profile, communicate with new audiences and secure vital support in key areas. Her commitment, enthusiasm and determination make her a very worthy recipient of a Points of Light Award.”

Christine also took part in a skydive this summer raising £3,500 for Cerebra.  Her colleagues at Hyphen Law are also proactively raising awareness and funds to support its work.

Regardless of whether it’s a doctor restoring local monuments in her free time, a father teaching young people life skills, or a local musician giving a voice to lonely people, the Point of Light award honours shining examples of volunteering across the UK.