Lambadarios Law Firm has advised Piraeus Bank (a subsidiary of Piraeus Financial Holdings SA) on the successful completion of its €300 million sale of its merchant acquiring unit to Euronet Worldwide, in addition to the formation of a long-term partnership between the two organisations. 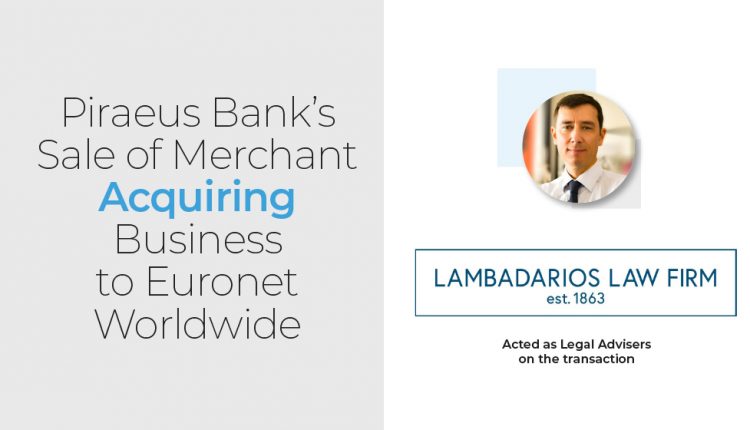 Piraeus Bank and Euronet Worldwide established a cooperative relationship in 2000 in relation to card processing services. Within the new partnership, the parties expect to provide significant value to existing and future customers in Greece, utilising the technological capabilities and the leading knowledge of Euronet Worldwide as an international payment provider which ensures state of the art products and services in the field of merchant acquiring.

Lawyer Monthly had the pleasure to speak with Constantinos Lambadarios, Partner at Lambadarios Law Firm to give us some further insight into this transaction:

Please tell us more about the role your team played in the transaction as local advisers to Piraeus Bank.

Our team advised Piraeus Bank on the sale of its merchant acquiring business to Euronet Worldwide and the establishment of a long-term sales and distribution partnership between the two entities. The transaction took place by means of a spin-off of the merchant acquiring unit of Piraeus Bank to a newly established entity and the subsequent sale and transfer of 100% of the share capital of this entity to Euronet Worldwide.

What skills did your team bring to bear as part of the transaction?

Did you encounter any challenges during the process?

A significant challenge was the numerous contractual agreements which had to be agreed and signed between parties in order to ensure the smooth continuation of the long-term partnership between Piraeus Bank and Euronet following the completion of the transaction. These agreements were significantly more complex than standard template documents as they had to be drafted from scratch, since there was no precedent in our jurisdiction with a similar case in the past. This was the first of its kind and key documents had to be drafted with innovation, a high level of sophistication as the merchant acquiring sector is quite complex, and speed, as the transaction had to close at a specific date.

How were these obstacles overcome?

These obstacles were overcome by providing objective and balanced advice and support to a top-notch Piraeus Bank transactional team, but also by coordinating with the very knowledgeable Euronet Worldwide commercial team and their excellent team advisors and by closely monitoring the process for the satisfaction of the closing conditions. Constant communication with the supervising competent authorities played also an important role in achieving all required regulatory consents.

In what sense does this deal reflect the character of your firm?

Our firm is focused on ensuring the conclusion of the most complex deals in commercially beneficial ways for our clients by overcoming the challenges with swift and sensible solutions.

“Experts in Law: Fluent in Business” is our motto and this approach was clearly reflected in this particular transaction.

What impact do you expect the deal and partnership between Piraeus Bank and Euronet to have on the two organisations, and on the payments market overall?

By this partnership, Piraeus Bank will be backed by the technological capabilities and expertise of an international payments provider like Euronet Worldwide and shall ensure that the future is in the hands of the people that know payment services. At the same time, Euronet Worldwide, by acquiring the merchant acquiring platform of Piraeus Bank, has acquired the largest merchant acquiring business in Greece and has secured cooperation with the largest bank in our jurisdiction, completing the first transaction of its kind. The market has now opened and there are three transactions pending which are identical to this one. NBG, Eurobank and Alpha Bank have all signed similar deals that will close in the coming months with EVO, Worldline and Nexi respectively. The market will be very different with the entry of four major international players 12 months from today.