Conti Studio Legale advised Foruminvest Italia on its purchase of a 11,500sqm site for a new hotel development in Milan. 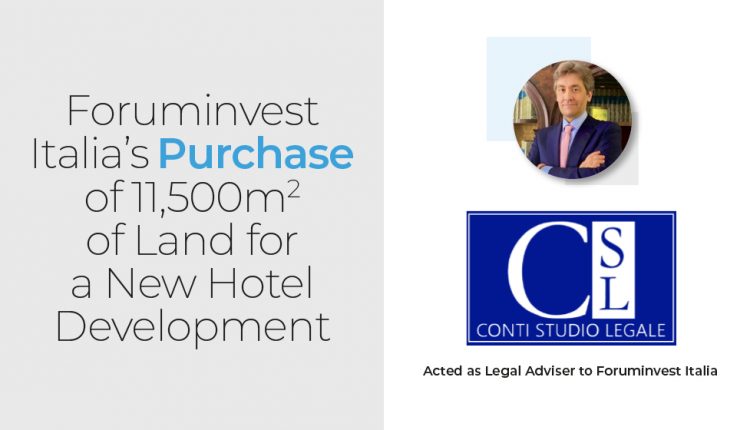 The site is adjacent to the international terminal of Milan Malpensa Airport on the MXP Business Park and located next to the Vodafone Automotive headquarters. It can be accessed by car via the A4 and A8 and by train via the Malpensa Express, which already links the airport with the city centre.

Accor was named through its partner Amapa as the management company of the new hotel – the first TRIBE-branded site in Italy. The hotel is planned to house 240 rooms, including 10 suites, meeting rooms, a ground-floor restaurant, a fitness centre, a bar and a rooftop swimming pool. The hotel will be served by a total of 130 parking spaces under and around the building. Construction is slated to begin in Q2 2022, with a planned opening in Q4 2023.

This land acquisition comes as part of Foruminvest’s stated strategy of investing in prime real estate in European cities and leisure destinations, including Milan and Como.

An Interview with Francesco Conti, Founder at Conti Studio Legale

Can you tell us more about the role your firm played during Foruminvest’s purchase?

What skills did you and your team bring to bear on the deal?

My team and myself were very much involved not only in the negotiations and drafting of the contracts, but also in assisting the technical department of our client to take the most appropriate legal choices with respect to the development of the hotel, both towards the tenant and the construction company.

When acting in these kinds of deals, which are already quite complex due the number of players involved, we always try not to overly complicate the texts of the contracts, which in our view should be drafted as simply as possible.

One other skill that we were requested to use was the capacity to harmonise any of the single contracts with the needs expressed by the tenant for the development and the construction company.

Also, we had to negotiate trying to minimise the impact of the dramatic price increase of the prime materials which started with the Ukrainian war.

Our firm was involved since the very beginning of the deal.

When advising on a large land acquisition such as this, what key concerns must be addressed?

The key concerns that must be addressed in a deal like this are typically related with the verification and analysis of the town planning agreements, zoning schemes and obligations that pertain the plot of land, the administrative regulations, the territorial and landscape liens and the authorisations for the construction (building permit).

It is also crucial to examine the title on the land of the seller, the encumbrances, the compliance with environmental laws and the presence of pollution or hazardous material – not to mention the tax implications that arise, for example, from the decision to perform an asset deal rather than a share deal.

What challenges did Conti Legal encounter during the course of this transaction, and how did you overcome them?

The most complicated part of the whole legal process was to negotiate with various other parties involved in the deal that were not necessarily aligned in their needs and also not necessarily involved in the same moments of the development. Our client acted as the only entity which was about to enter into legally binding agreements with all the parties and therefore was the only party which had to take into account the entire deal structure and the content of all the relevant contracts, which were negotiated in a quite short time.

I must say that our task was made less complicated thanks for the competence and attitude of the other legal counsels and firms that were assisting the partners of our client in the deal.

What impact do you expect this deal to have on travel and tourism in Milan?

I believe that this development will highly impact the area and significantly increase the offer of accommodations in the immediate surroundings of the Malpensa Airport. The hotel is literally in front of Terminal 1 and will be moments away from its entrance, which the guests will be able to access even walking.

This will not only allow overnight travellers to basically avoid leaving the terminal but will also give tourists the ability to stay very close to both the airport and the Milan city centre (the Malpensa Express train station is, again, a few steps away from the new building).

Also, this hotel will be the right choice for anyone who needs to work, or is interested in staying, in the Brianza area or the lake district (the Como and Maggiore lakes are very close), as the location of the airport is also very convenient for all the Varese, Como and Monza areas.

How does your work on this deal fit the profile of your law firm?

This deal actually represents a perfect example of one of our preferred areas of intervention.

Conti Studio Legale is an independent Italian law firm with a strong international vocation, specialised in real estate law, corporate law and data protection, with a focus on the private investor sector.

The firm has developed its experience in assisting leading national and international companies, supporting its clients in both ordinary and extraordinary transactions. It assists companies owning shopping centres and parks, outlets, hotels, student residences, senior housing and smart and social housing in the acquisition, development or enhancement and management of their assets.

The firm acts in mergers and acquisitions, both in asset or share deals, and operates in all the phases of transactions from due diligence to closing. Daily, the firm is involved in drafting and negotiating lease contracts, hotel management contracts and construction and development contracts as well as any other real estate related contract.

DealsM & A
By Francesco Conti On May 31, 2022 0
0
Share FacebookTwitterGoogle+EmailPinterestLinkedinTumblr