Cryptocurrency experienced a record bull run in 2021, briefly propelling the market past $3 trillion in value in November. Two months later, a wave of new crypto restrictions and outright bans by several major economies has coincided with a catastrophic price plunge, all but erasing the market’s gains. 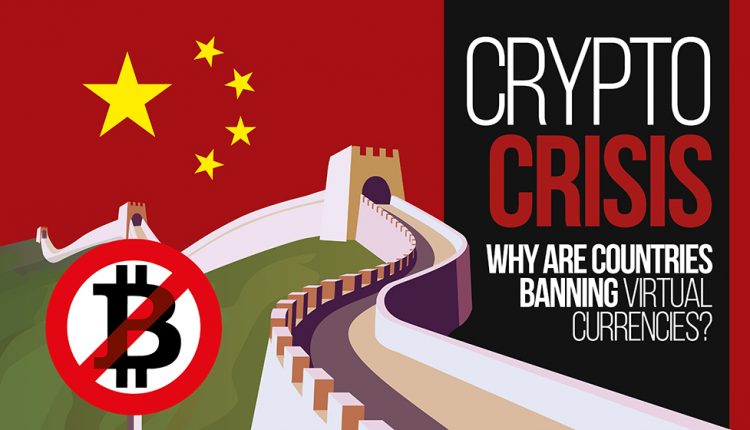 Russia became the latest nation to join in the evolving conversation last week as the Bank of Russia called for a blanket ban on the mining, trading and usage of cryptocurrencies in the country. Though it remains to be seen whether any ban will materialise after President Vladimir Putin weighed in on the side of crypto miners, Russia would be far from the first to implement such measures. The list of countries that wholly banned cryptocurrencies includes China, Egypt, Iraq, Qatar, Oman, Morocco, Algeria, Tunisia, Bangladesh and (as of this month) Kosovo. Forty-two others have passed restrictions to this effect, prohibiting crypto exchanges or limiting the ability of banks to engage with crypto.

What are the factors driving these decisions, and how might they affect the future of global crypto regulation?

The current global ‘crypto crash’ is not the first time that Bitcoin and the wider crypto market has greatly depreciated in value. Similar crashes have occurred in 2021, 2020, 2018, 2013 and even earlier. These cyclical bull and bear runs are owed to the inherent volatility of crypto.

As a decentralised currency independent of the backing of governments or financial institutions, Bitcoin and other virtual tokens allow for greater transactional freedom while being susceptible to extreme price fluctuations sparked by investor speculation and media hype. Crypto’s volatility has spurred the creation of so-called ‘stablecoins’ such as Tether, which do away with the premise of decentralisation by pegging themselves to the price of a stable asset – commonly the US dollar – though these tokens are highly dependent on the resources and good behaviour of their issuers, as was shown when a lawsuit brought by the state of New York found that Tether Holdings did not possess the $69 billion it claimed to be backing its currency.

The current global ‘crypto crash’ is not the first time that Bitcoin and the wider crypto market has greatly depreciated in value.

A case study can be found in El Salvador, which in September 2021 became the first country to adopt Bitcoin as legal tender. Intended to expand financial inclusion and help residents save on annual commissions on remittances, only a small fraction of businesses moved to accept transactions in Bitcoin due to concerns over price volatility and data privacy. The International Monetary Fund (IMF) cited these issues alongside “large risks associated with the use of Bitcoin on financial stability, financial integrity, and consumer protection” in a report recommending that El Salvador remove Bitcoin’s legal tender status.

As an emerging technology, new legislation has been required to define and govern the use of cryptocurrencies, with widespread recognition of the assets among governments a relatively recent development.  For some investors, the blockchain’s emphasis on individual users and lack of state regulation is one of its primary selling points. For governments, this lack of regulation presents significant issues, not least the difficulty involved in calculating the tax liability of cryptoassets.

The Indian government touched on this while announcing a bill to ban most private cryptocurrencies in November. In addition to allowing only certain cryptocurrencies to promote the underlying technology and its uses, India will launch its own official cryptocurrency. Prime Minister Narendra Modi has also been outspoken on his wish for deomocratic nations to cooperate on the regulation of crypto to ensure that it does not “end up in the wrong hands”.

Australia has made similar moves towards tighter government oversight of cryptocurrency, announcing its intent to create a licensing framework for crypto exchanges alongside a possible digital currency backed by its Reserve Bank. These measures will likely only become more commonplace over time as governments continue to crack down on large technology companies, particularly in the payments space.

For governments, this lack of regulation presents significant issues, not least the difficulty involved in calculating the tax liability of cryptoassets.

While predominantly identified as an issue by end users, the impact of widespread cryptocurrency usage on the climate has not escaped the notice of governments. The root of the problem lies in crypto’s use of blockchain systems and their reliance upon heavy usage of computer power; each Bitcoin transaction, for instance, requires the majority of computers on the Bitcoin blockchain network to verify the action.

Bitcoin is one of the greatest energy consumers in this respect, with each individual exchange requiring 1,173 Kilowatt Hours’ worth of energy to complete – the rough equivalent to six weeks’ worth of energy consumption in an average American household. Bitcoin mining and transactions alone expend an amount of energy per year comparable to the entire country of Norway.

Aside from the greater impact that this expenditure and the associated carbon emissions have on the climate, crypto’s intensive energy use has an immediate impact on power grids, particularly in developing nations. Following a recent series of power cuts, the government of Iran has claimed that illegal crypto mining has been responsible for “10% of electricity outages this winter”. Meanwhile, Kosovo’s recent decision to ban cryptocurrencies entirely came on the heels of its own string of power outages, for which the government likewise blamed large-scale crypto mining. As climate change becomes yet more prevalent on national agendas, it is reasonable to guess that cryptocurrency restrictions will continue to strengthen as nations reach for new ways of mitigating the crisis.

Cryptocurrency’s usefulness for money laundering and buying drugs online has been known to regulators for years, and its prevalence has never diminished to any great extent – even during crypto bear runs, the volume of ‘dark net’ transactions remains as high as ever. Indeed, illicit activity appears to be the sole area of crypto transactions that is not affected by large-scale price fluctuations.

The COVID-19 pandemic has exacerbated the spread of dark net crypto transsactions, largely in the area of ransomware attacks where infiltrators encrypt a victim’s information and demand payment in their preferred form of cryptocurrency. The worry that crypto’s potential criminal usage may outweigh its benefits was referenced explicitly in the Bank of Russia’s January report calling for a nationwide crypto ban. Turkey’s 2021 crypto ban used language in a similar vein, as did China’s most recent anti-crypto crackdown.

Of course, this potential for risk has not escaped the rest of the international community. The US may soon take a regulatory stance of its own to combat fraudulent crypto practices, with President Biden reportedly readying an executive order asking federal agencies to weigh the risks and opportunities posed by cryptocurrencies.

Is The Damage Done?

Regardless of whether or not the US and western Europe take their own steps to curb blockchain trading, the damage that the wave of regulation has inflicted on investor confidence in crypto may already be irreversible. January has seen both popular and niche cryptocurrencies plummet in value, wiping out around $1.4 trillion from the combined crypto market. Bitcoin and Ethereum have both crashed more than 50% from their 2021 peaks, while other assets have fallen more than 80%. Should the US further countries implement crypto restrictions of their own, this slip may be set to grow even more steep.

The staunchest crypto supporters are not dissuaded, however. Online investor communities continue to urge each other to hold their crypto portfolios. In response to the IMF’s recommendation that his government give up Bitcoin as legal tender, El Salvador’s President Nayib Bukele responded with a derisory meme. We can only wait and wonder whether their instincts are right, or if this latest trough might be the one that finally sticks – and what the global regulatory world may look like in 2023.