An analysis of patent filing data over the past decade has revealed the countries at the forefront of food and microbiology research. 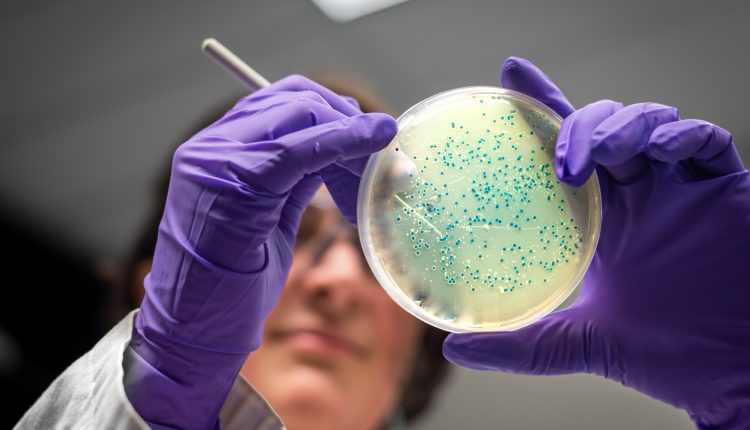 Microbes present in food and drink, which have a functional effect on the health of the digestive tract, are popular with consumers and common on supermarket shelves. These products include those containing specific beneficial microbes (probiotics) and those containing ingredients that promote the growth and maintenance of healthy gut microbes (prebiotics).

Products such as kefir have recently seen a surge in popularity as consumers become more conscious of the benefits of maintaining a healthy microbiome. This is reflected by patent filing trends, where the number of patent families worldwide containing the word “kefir” boomed in 2016.

To investigate recent trends (2009-2019) in the microbes in food and drink landscape, we searched online patents databases, using the search and analytics tool Patently®. As an initial strategy, we focused on patent classification codes relating to probiotics and prebiotics in food that have a functional effect on the health, including humans and animals. Our initial search encompassed a broad range of products from probiotic pet food for small dogs[1] to probiotic supplements for metabolic health[2] 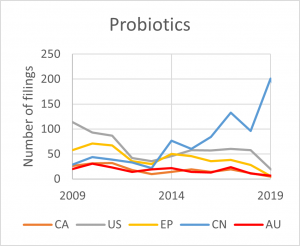 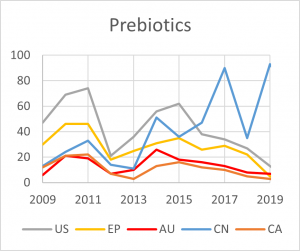 Our search highlighted that most top offices, including the European Patent Office (EPO), have not seen an acceleration in filing activity for food probiotics and prebiotics between 2009-2019. Conversely, China (CN) has seen a definitive increase in such filings, suggesting that they are currently at the forefront of such research, perhaps replacing the US. 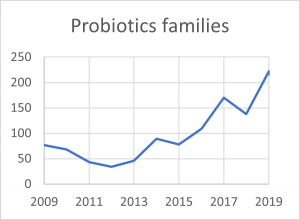 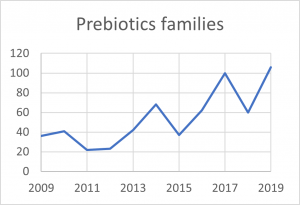 Indeed, the number of probiotics and prebiotics patent families has seen a general increase worldwide, likely due to the recent surge in Chinese filings over the last 5 years.

Further analysis indicates that more patent applications in this field are concluding in grant by patent offices in the US and at the EPO, as compared to cases being granted in China, for example. However, many of the applications more recently filed in China will likely still be undergoing examination, thus China could soon see a large increase in the number of granted applications. 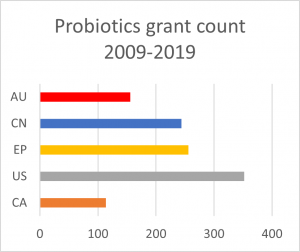 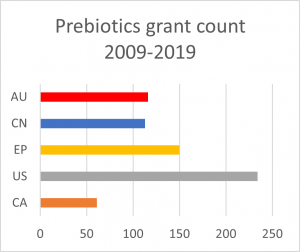 We next performed a targeted search to investigate filings relating to probiotics beneficial to the digestive system and dairy products. Some of the world’s largest nutrition companies appear to be dominating this field. Ownership analysis of our data indicates that French multinational Danone, along with its subsidiary Nutricia, appear to be leading the way; each holding a significant number of patent families. Danone’s position is perhaps unsurprising, considering the popularity of its probiotic products Actimel® and Activia®. 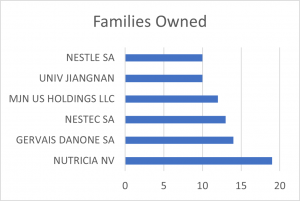 Similarly to our broader search, analysis of our probiotics in dairy data also revealed that the EPO is a top office for granting applications in this field from 2009-2019, outperforming the US. 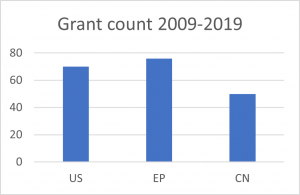 We identified over 70 European patents specifically directed towards dairy products containing living probiotic bacteria that have an effect on the digestive tract, which protect compositions, bacterial strains and uses thereof in treating disorders and maintaining a healthy gut. For example, see Danone’s patent for a fermented dairy product comprising a Streptococcus thermophilus strain, for increasing or maintaining a Faecalibacterium prausnitzii population, the most abundant bacterium in the intestine of a healthy adult, which plays a vital role in the gut microbiota[3].

Probiotics are also now frequently found in dried foods such as cereal and muesli, and some patents and applications identified in our above searches overlap with these food groups. Despite the growing demand, a targeted search identified very few patents specifically directed towards probiotics in cereal and muesli, suggesting that this remains a relatively nascent area for patenting.

Many product/composition claims granted by the EPO in this field are restricted to a specific deposited microbial strain[4] unless breadth of protection has been achieved by also claiming mutants of specific deposited strains in combination with a functional requirement. For applicants seeking protection before the EPO for such inventions, specific provisions relating to biological deposits must be complied with.

At the EPO, claims that cover methods of medical treatment or therapy are excluded from patentability under Article 53(c) EPC[5], even if the invention also has non-therapeutic effects. However, where these effects can be properly distinguished and the therapeutic effect is not inevitable, a method claim may be allowed. In some cases, it is not possible to distinguish between therapeutic and non-therapeutic effects and it would be preferable to frame the method in terms of a “product for use”, to avoid objections. Our specialist European Patent Attorneys have significant experience of advising on patent strategies in this field.

[3] EP3394294 B1 claiming Streptococcus thermophilus CNCM I-3862 and a fermented dairy product comprising the same.

[4] Danone’s patent EP3394294 B1 (also discussed above) claiming a Streptococcus thermophilus strain deposited at the CNCM under reference number I-3862.

[5] Danone’s patent EP3166619 B1 claiming “Lactobacillus paracasei CNCM 1-3689, for use in treating an Enterococcus faecalis infection in the intestinal microbiota of a subject having an antibiotic-induced dysbiosis.”

IPMost RecentOpinion & Analysis
By James and Rai On May 6, 2021 0
0
Share FacebookTwitterGoogle+EmailPinterestLinkedinTumblr