Are SPACs Here to Stay or Will Regulation Destroy them?

What are SPACs, and what implications does their meteoric surge in popularity have for traditional IPOs? 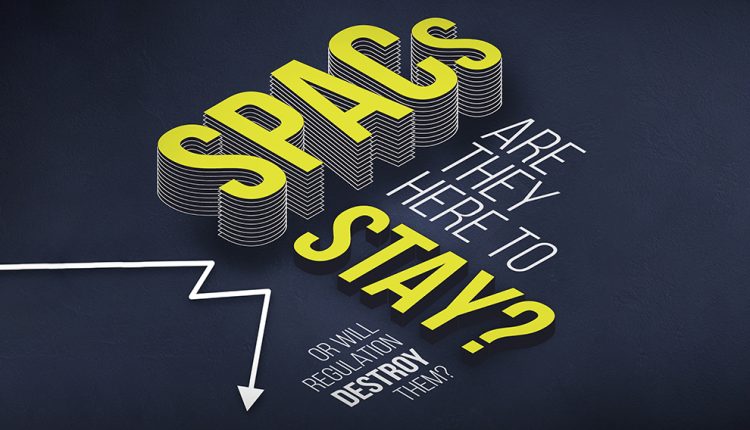 Special Purpose Acquisition Companies (SPACs) have been all the rage recently. In fact, there were $166 billion in SPAC deals announced in the first quarter of this year, exceeding the number of deals seen in 2020. A feat that showcases the rise in popularity is how, last year, the US – the current front-runner of SPAC markets – saw nearly 250 SPACs, compared to 59 in 2019 and only 13 in 2016[1]. SPAC merger sizes are also reportedly increasing, with the average size of an announced merger now sitting at a whopping $2.3 billion compared to $900 million in the first quarter of 2020 and $800 million in the first quarter of 2019[2]. What accounts for this rise in popularity?

Well, aside from the fact that SPACs have been supported by celebrity endorsements and backed by sports stars, blank-cheque companies have raised jaw-dropping amounts, driving capital markets in an era where IPOs were placed on hold due to the pandemic and the uncertainty surrounding it. With the number of public companies decreasing whilst the money being pumped into public markets is simultaneously rising, SPACs have been pushed into the market as a way of bringing money into new companies. The more traditional way of going public via an IPO is famously known for being heavily regulated, and SPACs provide a somewhat easier route into the public market – but this does come with some pricked ears and raised eyebrows from critics, who have been vocal about the lack of regulation and heightened risk.

Anu Balasubramanian, Private Equity Partner and Jamie Holdoway, Private Equity Associate at Paul Hastings, spoke to us about regulation in M&A and SPACs. “SPACs are not a new phenomenon, which raises the question as to why existing securities laws are said to be unsuitable to deal with current market trends”, they said.

They explained that, fundamentally, regulators have refocused their attention on SPACs for two reasons. “Firstly, the sheer amount of capital which has been raised by blank cheque vehicles in the last twelve months, particularly the sharp acceleration in Q4 2020 and Q1 2021.

There were $166 billion in SPAC deals announced in the first quarter of this year, exceeding the number of deals seen in 2020.

“Secondly, the increasingly high valuations for businesses which are comparatively nascent when compared to those which usually opt for the conventional route to public markets.”

As aforementioned, SPACs are often described as an alternative route to IPO. This is affected by a de-SPAC, in which the listed blank cheque company merges with the operational target. “The sheer number and popularity in SPAC transactions have led some to identify a potential gap in securities laws whereby a de-SPAC is not subject to the same standard of regulation as a traditional IPO”, Anu and Jamie explained.

For example, while it is common for a SPAC to present financial projections about its acquisition target (which can be a relatively young business), companies seeking an IPO usually avoid doing so because of the associated liability risks. “SPAC sponsors have sought to avail themselves of certain “safe harbour” provisions relating to private securities litigation. Those provisions explicitly exclude IPOs, and it is yet to be tested whether a de-SPAC can take advantage of them on the basis that the initial offering of securities occurs before the de-SPAC merger”, they stated.

As such, the question is whether the two routes to the public markets should be regulated in the same way. “SPACs have allowed investors in public equities to participate in investment at an earlier stage in a company’s growth. This is arguably a welcome development after a 10-year trend in companies remaining in private hands for longer and more mature businesses shunning the IPO route because of volatility in price exploration”, Anu and Jamie expanded.

The SPAC boom has slowed down since, due to regulators paying a little more attention. According to the Financial Times: “In a series of escalating statements, US securities regulators have raised sharply worded concerns about the recent boom in SPACs, questioning everything from optimistic revenue projections to the involvement of celebrities such as Jennifer Lopez and Alex Rodriguez in the companies.” With the appointment of Gary Gensler of the Biden administration to lead the SEC, many predict that blank-cheque companies will be a top priority in the coming months. The SEC has recently announced that a number of SPACs have misclassified warrants sold to investors as equity rather than liabilities, which has thrown doubt over valuation assumptions[3]. And in fact, despite the strong start in the first quarter, fewer than a dozen SPACs completed IPOs in April, resulting in it being the slowest SPAC-filled month since June 2020.

With the appointment of Gary Gensler of the Biden administration to lead the SEC, many predict that blank-cheque companies will be a top priority in the coming months.

The key points the regulators are wrestling with centre on disclosure of information. “If SPAC vehicles present a very attractive but (arguably) high risk opportunity, they should be required to present a fair assessment to investors. Similarly, regulators are concerned about the level of transparency around how sponsors benefit from the transaction and conflicts of interest”, said Anu and Jamie.

They explained that, although investor appetite for SPACs has cooled meaningfully in recent months, prior levels of activity and the fallout from a potentially overheated market will likely force regulators’ hands to act. “It is interesting that whilst the Securities and Exchange Commission (SEC) has sought to deflate investor appetite, the Hill review in the UK essentially recommended changes aimed at promoting SPAC listings. Such reactions are driven by the parameters of the pre-existing regimes, showing that regulators have not identified a balance for these vehicles and that their approach to SPACs has been reactionary. This suggests that regulators may need more time to assess how to regulate SPACs as an investment strategy in its own right, rather than bringing them within the same parameters as the regulations for an initial public offer”, they concluded.

SPACs exploit what critics view as “regulatory arbitrage” to provide financial projections that companies launching IPOs and direct listings would normally avoid. Investors are essentially relying on trust, to a certain extent, as to whether the SPAC will ultimately be successful. But because de-SPAC transactions qualify as mergers, companies can present forward-looking statements and protect themselves from lawsuits under an exemption contained in the Private Securities Litigation Reform Act of 1995. Of course, certain SPACs are designed to allow investors to exit if an acquisition target is identified which does not meet an investor’s investment criteria, but both the process and level of disclosure at the outset of a listing of a SPAC vary significantly from what you would find in a traditional IPO.

It is expected that Gensler, an outspoken Wall Street critic, will consider stronger changes to the SPAC market, possibly calling for bankers to face the same liability risks as they would on underwritten IPOs. Disclosing more information on the names and addresses of investors involved would help identify who stands to profit or lose money, alongside structural changes that would help improve the disclosures made to shareholders, preventing ordinary investors from being ‘scammed’ in the process. The amount of capital sitting in SPACs has also drawn worries that sponsors will not be able to find suitable targets, pushing them towards companies of questionable value, pushing the idea that more clarity and disclosure is needed. Risk will always prevail when an investment becomes popular based on a product that is not yet on the market; market projections are just that, a projection and not a guarantee, and when celebrities hop on board to push the promotion of a SPAC, concerns arise. Providing additional clarity or a safeguard for failed transactions would be useful as it will give market participants greater certainty. Will tighter regulations pop the SPAC bubble? I doubt it.

Two key reasons – appetite for investments among the investor public and the ability of the SPAC route to offer a quicker road to an IPO as opposed to the traditional methods of going public. These factors, and the overall enthusiasm in the market, have led to healthy prices in M&A and driven the enthusiasm for SPACs.

In short, a Special Purpose Acquisition Company, or SPAC, is a vehicle that is essentially an empty shell that is formed and raises capital in an IPO with a view to acquiring a target within a given period, usually within one to two years. The SPAC then acquires the target, which effectively becomes a subsidiary of the listed SPAC. The process has proven itself as an easier means for a company to become listed on the public markets as the traditional IPO process would typically take more time and require additional disclosure and financial information.

SPACs are regulated currently – the question is one of degree and how to apply the existing rules to the large number of companies seeking to go public via a SPAC acquisition.

There is a growing concern amongst regulators that SPACs have become an end run against the rules designed to safeguard the public markets and that SPAC-fuelled acquisitions have attempted to circumvent the rules that would otherwise apply to IPOs.

The very nature of a SPAC entails that when a SPAC initially lists it is generally before the acquisition target has been identified. Investors are taking it on trust to a certain extent as to whether the SPAC will ultimately be successful. Of course, certain SPACs are designed to allow investors to exit if an acquisition target is identified which does not meet an investor’s investment criteria, but both the process and level of disclosure at the outset of a listing of a SPAC vary significantly from what you would find in a traditional IPO.

Shareholder lawsuits are quite common in NY and elsewhere. There are a number of plaintiffs firms that are seeking to use some issues faced by certain SPACs as a means to extract settlements from the SPACs. It is difficult to say whether each of the lawsuits has a meritorious claim, but there are certainly critics of SPACs that would agree with the lawsuits that have been filed.

There is a healthy tension in the market between innovation and regulation. Speaking personally, I think that it is sensible for the regulators to examine emerging market trends, including SPACs, and to consider what changes might be necessary.

I would expect that the regulators will take steps to dial down the frenzy in the marketplace surrounding SPACs. The current environment has something of the feel of a bubble and I understand that the regulators globally will be considering whether that is a good thing and trying to take appropriate steps to reduce any issues.

Speaking generally, providing additional clarity regarding proposed regulations that would affect SPACs and IPOs generally would be useful, as it would give market participants greater certainty.