In this article, experts at EIP explain how there is a flavour for increased commercial interest in the skin microbiome and the specific considerations, challenges and opportunities for companies trying to navigate the European Patent Office’s approach to patents in this field. 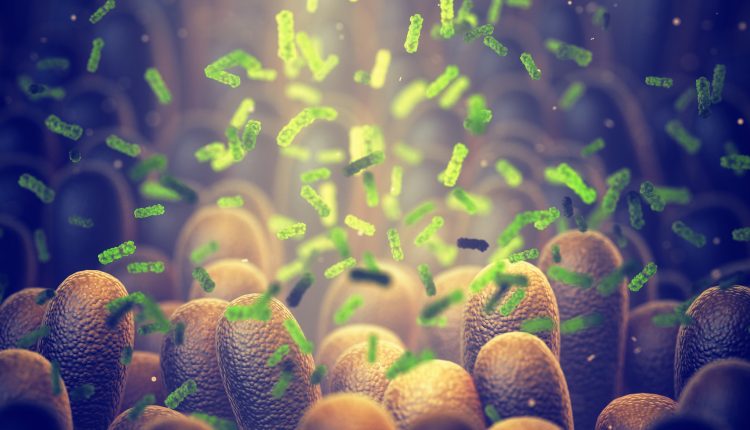 The microbes present on our skin, the skin microbiome, is increasingly being prioritised in the next generation of personal healthcare and cosmetic products. Over the last decade, efforts such as the Human Microbiome Project have highlighted enormous diversity within the beneficial microbes that live in or on our bodies.  The microbiome is of enormous interest to the health and personal care, food and agriculture sectors.  The cosmetics/ personal care sector, fuelled by consumer demand, is recognising the value in developing microbiome friendly skincare products.    Such products include those containing specific beneficial microbes or those that encourage the maintenance of healthy skin microbiome. 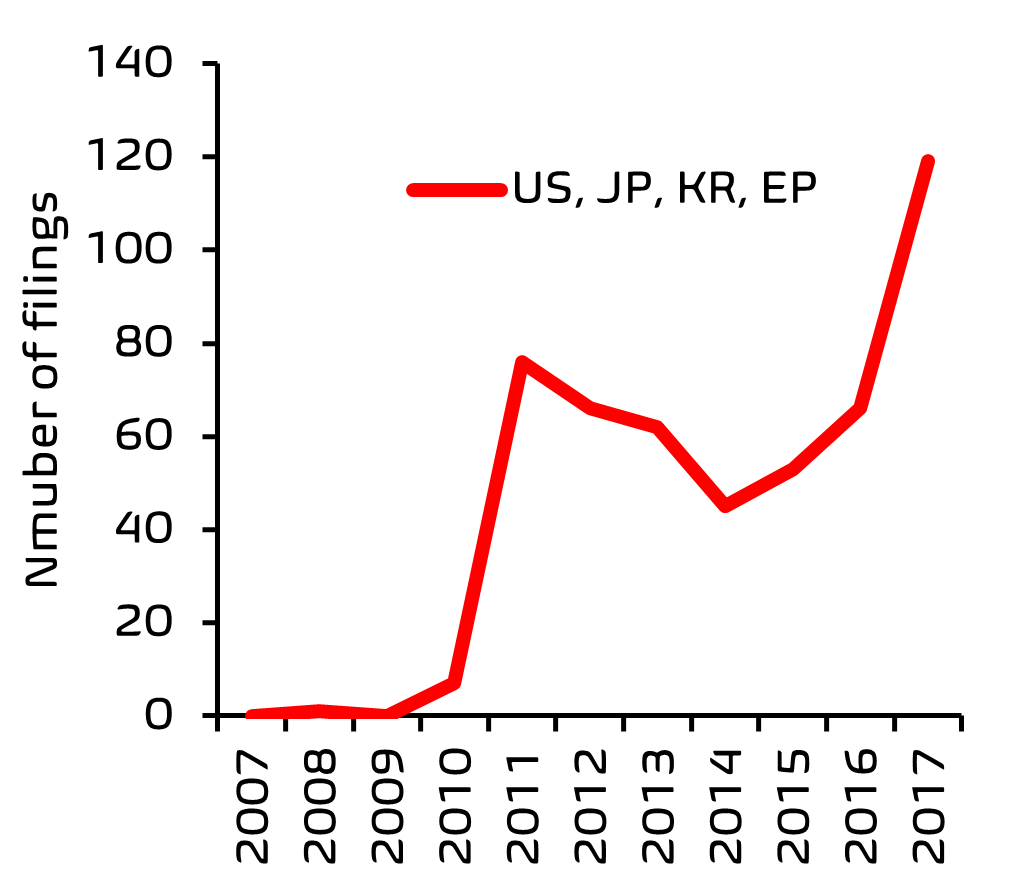 Innovation in any field of technology usually leads to an upsurge in patenting activity in that area.  To investigate recent patent filing trends (2007-2017) in the personal care sector, we searched online patents databases, using a search and analytics tool, Patently®, developed at EIP.  As a search strategy, patent classification codes relating to skincare were cross-referenced with those relating to microorganisms, and also with keywords such as ‘microbiome’ and ‘probiotic’. Once the search results were filtered to remove references to topical antibacterial treatments and microbial methods for producing compounds, we were left with a reasonably comprehensive overview of patent filing activity.

From this search, it was clear that there has been a significant acceleration in filing activity, with the European Patent Office (EPO) being one of the top five patent offices receiving these filings. 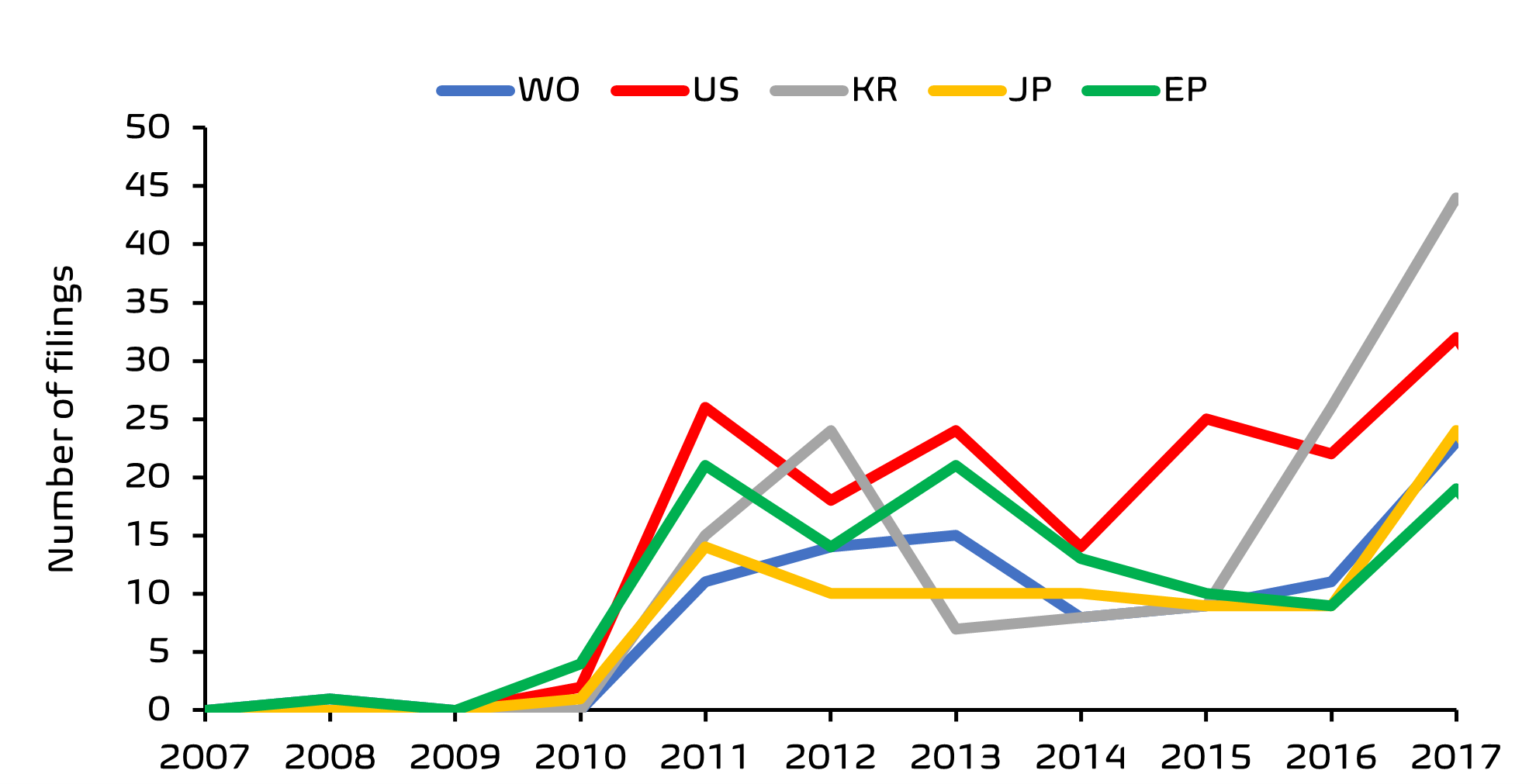 Further analysis of these results by Patently® also indicated that more patent applications in this field are concluding in grant by patent offices in South Korea as compared to cases being granted by the European Patent Office.

Finally, ownership analysis indicates a diverse group with no single large company dominating the field. Asian skincare giant, Amore Pacific Corp (owners of luxury skincare brand, Sulwhasoo) appear to hold the highest number of patent filings by a single entity.  Skin care aficionados will not be surprised to learn that South Korean companies lead the way when it comes to first filings in this area; and whilst many of these applications are filed in Korea only, there is a growing recent trend in International and European regional applications having a first filing in Korea, perhaps reflecting the growing popularity of Korean skin care products outside of Korea.

The importance of the skin microbiome has also not escaped larger European and US cosmetics companies, who are increasingly active in this area, with household names such as Proctor and Gamble as well as more niche companies holding applications and patents in this field. 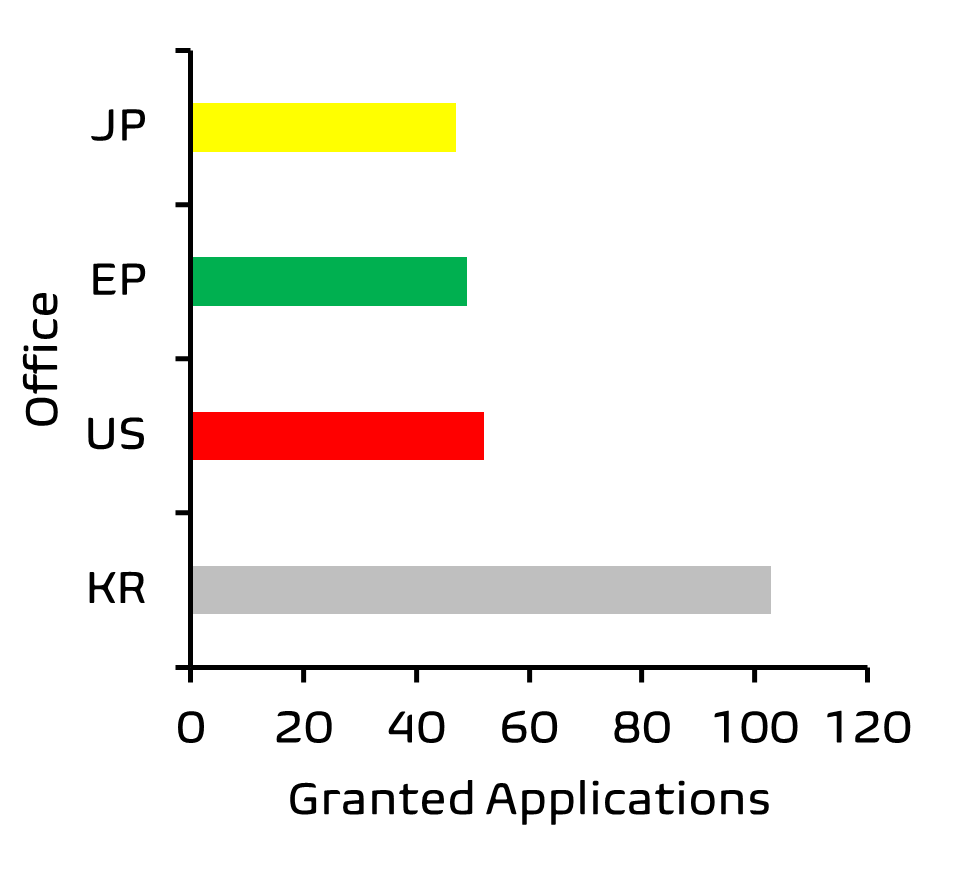 That said, this remains a relatively nascent area for patenting; in Europe we identified a modest ~50 patents granted between 2007-2017 relevant to the skin microbiome, which protect compositions, bacterial strains and uses of these in treating skin disorders.  Many of the applications are likely still undergoing examination. We expect filing activity in this area to continue to accelerate in the coming years, as the public become more educated on the importance of a balanced and varied skin microbiome, and increasingly demand products which help achieve this.

In view of all these patent and commercial trends and our experience in this field, we comment on the types of claims that have led to patents being granted by the EPO. Our hope is that this will help guide the patent strategies of innovators in this field.

Emerging fields such as this, with no companies dominating the space hold promise for companies entering the market, in terms of the ability to achieve useful breadth of patent protection for their products and in negotiating mutually beneficial arrangements with other companies in this space.  For companies considering protecting their intellectual property in Europe, one of the initial considerations while drafting a patent application should be to identify a claim strategy that allows for reasonable breadth of protection while still meeting patentability requirements.  In addition to pursuing claims to specific microbes or compositions of interest, full consideration should be given to other claim categories such as claims directed to specific uses or methods and including well defined functional limitations in claims if that can allow the specific microbes in the product to be defined more broadly.  Here are some practical points and examples of granted patent claims to consider: 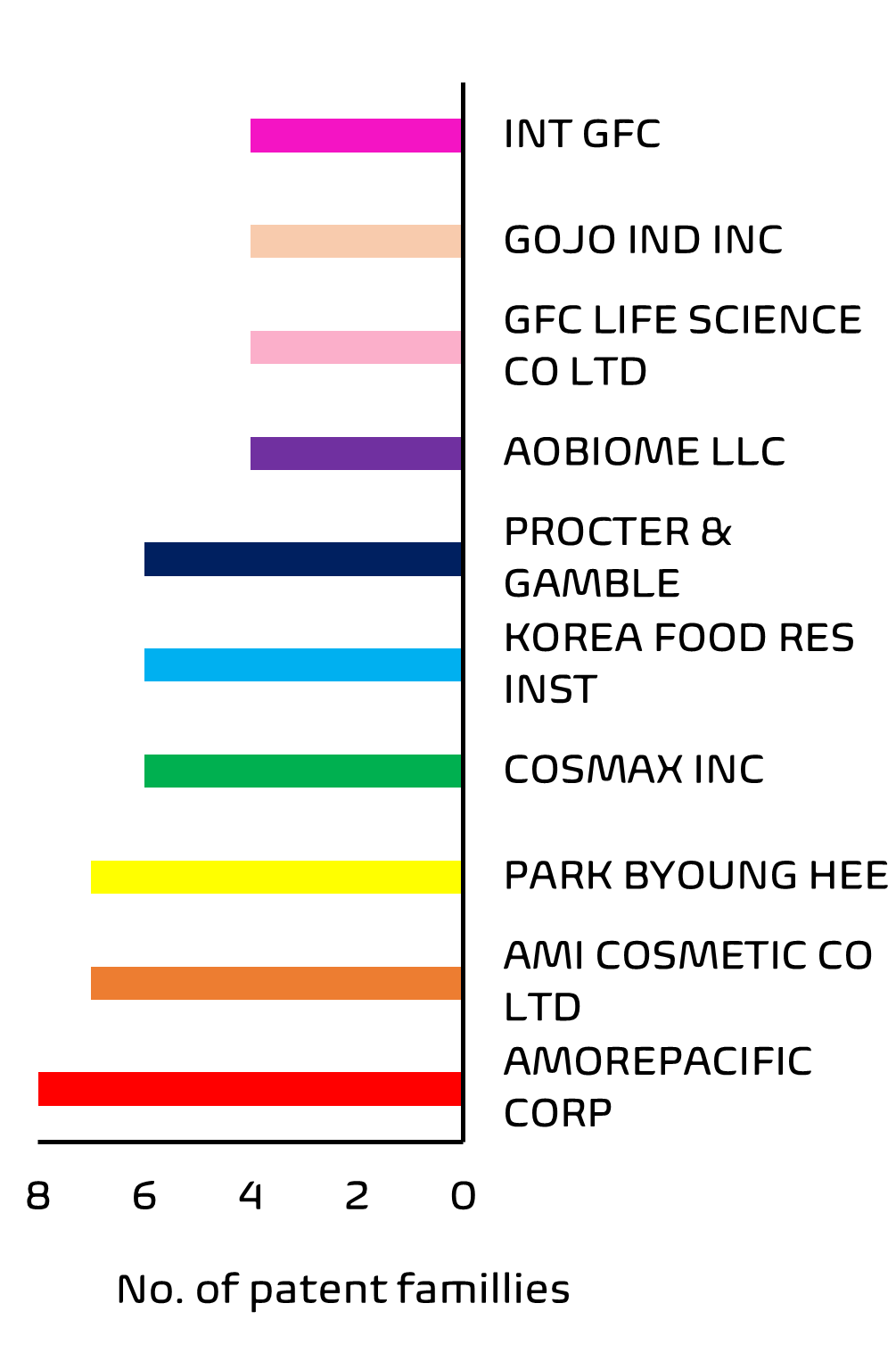 Our review indicates that most product/composition claims granted by the EPO in this field are restricted to a specific deposited microbial strain[1] unless breadth of protection has been achieved by also claiming mutants of specific deposited strains in combination with a functional requirement[2]. Such functional definition, provided it is clear, can be useful in convincing the EPO that the claimed mutant strains also meet patentability requirements since they share the advantageous properties of the deposited strain. For non-EU applicants who will eventually seek protection before the EPO, an important point to note concerning microorganism deposits is that the specific deposit should be made before the earliest/ first filing and other requirements must be met within 16 months of such earliest/ first filing; failure to take these actions cannot be remedied upon entry into the European Regional phase. If in any doubt, discuss these requirements with a European Patent Attorney prior to your first filing for an invention that will require deposit of a microorganism.

The EPO may be more likely to allow broad protection, which is not limited by specific strains, or even by species, if the claimed product addresses challenges which are not tied to the specific microbes involved; for example, how to stabilise probiotics in formulations so that they remain active.  In addition, where probiotics are added to products which would not have contained these previously, claims may not need to specify a particular strain or even species of bacteria.[3]  Therefore, applicants should always consider widely what challenges they have overcome to arrive at their final product; since broad claim scope may still be available to them in Europe.

Applicants are therefore encouraged to test their products widely and, where possible, arm themselves with a range of examples showing the potential for improvement of a variety of conditions using a variety of microbes before filing a patent application claiming the use of those microbes for improving those conditions.

Another aspect for applicants to consider, is that unlike methods of medical treatment, cosmetic methods are not exempt from patentability at the EPO; for example, an application containing claims directed to the purely cosmetic treatment of a human by administration of a product containing a probiotic would not be excluded from patentability. This claim strategy can allow for broader protection than a specific deposited microbial strain and different patents for specific uses[4] can allow for follow on patent for a specific use when the specific strain may already be in the public domain or the subject of a previous patent[5].  However, since there is often crossover between cosmetic and therapeutic uses, in some cases it would be preferable to frame the method in terms of a “product for use”, to avoid objections arising under Article 53(c) EPC, which is a provision excluding methods of treatment from patentability in Europe.[6]

When claiming a use in treatment (cosmetic or otherwise), due thought should be give to sufficiently describing the microbes that achieve the claimed use so as to enable a reader of the patent to obtain the relevant microbes without too much effort. This is because the EPO requires evidence that a claimed use or technical effect is plausible – both in terms of the group of microbes that are claimed for the use as well as across the uses recited in the claim.  Applicants are therefore encouraged to test their products widely and, where possible, arm themselves with a range of examples showing the potential for improvement of a variety of conditions using a variety of microbes before filing a patent application claiming the use of those microbes for improving those conditions.

Our comments above provide a flavour for increased commercial interest in the skin microbiome and the specific considerations, challenges and opportunities for companies trying to navigate the European Patent Office’s approach to patents in this field.  EIP has a team of life science attorneys who have experience of and enthusiasm for this field enabling us to provide comprehensive strategic advice in this area.

[2] See for example EP1893744 B1 and EP1995307 B1 claiming specific deposited strains and mutants thereof having desirable functional requirements such as  “ a) the ability to stimulate the growth of Staphylococcus epidermidis and b) does not stimulate the growth of microorganisms selected from the group consisting of Staphylococcus aureus, ……, wherein stimulation is determined by an increase of growth of at least 5% by the respective microorganism in an in vitro hole plate assay.”

[4] See for example Nestle patent EP2306970 B1 claiming “Oral cosmetic non-therapeutic use of an effective amount of at least one active agent for treating and/or preventing oily skin or disorders associated with an oily skin chosen among a desquamation defect, a glistening complexion or a thick skin grain characterized in that said active agent is a probiotic microorganism Lactobacillus paracasei.”; EP2332520 B1 claiming “The cosmetic, non-therapeutic use of at least one Lactobacillus paracasei probiotic microorganism as active ingredient useful for treating impaired radiance of the skin’s complexion, said impairment being a skin imperfection selected from among age spots and/or melasma.”

[5] See for example P&G patent EP2308566 B1 claiming “The use of orally administered probiotic Bifidobacteria having the accession number NCIMB 41003 for the cosmetic regulation of the signs of aging resulting from large pores; and/or for the cosmetic reduction of flaking of skin and/or scalp.”

[6] See for example EP2226068 B1 in the name of Nestle claiming “a composition comprising an effective amount of at least one probiotic microorganism, said microorganism being selected from among Lactobacillus paracasei from one of its fractions and/or from one of its metabolites as an active agent intended to be used for preventing the manifestation and/or treating irritant non-allergic contact dermatitis.”