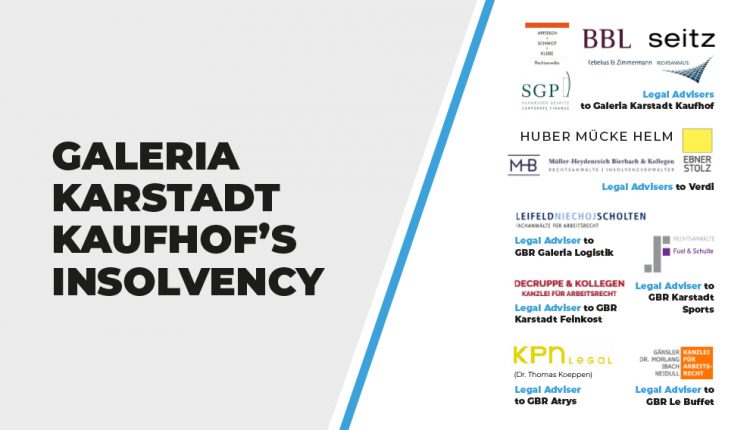 Galeria Karstadt Kaufhof, Germany’s biggest department store – alongside eight affiliated companies – filed for administrative insolvency earlier this year after announcing they would close 62 out of 172 branches and make 8,000 of the approximately 30,000 employees redundant.

The management agreed on the corresponding social collective agreements with the unions Verdi and NGG shortly before the protective shield procedure – which was sought by the company early April due to the impact of Coronavirus – was completed. The Austrian parent company Signa also announced that it would take 366 million euros as a restructuring contribution.

The management has now presented a plan to the responsible district court in Essen, which explains the steps towards the desired restructuring, which is aiming to be completed by late autumn.

Of the approximately 366 million euros that the parent company Signa plans to fund, around 200 million euros are earmarked for rent. Negotiations are currently still ongoing with the respective property owners about the rental costs.

Please tell me about your involvement in the deal.

In the context of the Galeria Karstadt Kaufhof insolvency proceedings, I represented the General Works Council of Atrys in the event of a change in operations: namely, a partial shutdown and continuation of some parts after a so-called “transfer of business.”

Why is insolvency challenging, especially during these uncertain times?

Advising Works Councils in insolvency situations is often difficult for several reasons. While Works Council members must represent all employees and fight for the rights of the entire workforce, they are often personally affected by the insolvency as well and therefore fear for their own survival. In addition, reconciliation of interests negotiations are extremely time-intensive, with discussions often lasting far into the night. At the same time, however, these Works Council members have to search for new jobs for themselves. This makes these negotiations extremely challenging for them.

The shutdown of the company was an incredibly frustrating experience for everyone involved.

How do you ensure the right decisions are made, especially when so many jobs are at risk?

The Works Council fights for every single job during every phase of the process — that’s a given. What usually makes sense is for the Council to take an analytical approach, evaluating the information they receive and preparing changes or alternative proposals if necessary.

The General Works Council worked intensively for the continuation of the company. The administrator was also given intensive support in the search for an investor. Although in the end no investor was found for the entire company, parts of it were fortunately attractive to investors, as every single job preserved is a success.

For the employees whose jobs could not be preserved, it was important to streamline their transition to receiving employment agency benefits. It was also important to ensure the employees were given the best possible support in filing their claims with the insolvency administrator.

The shutdown of the company was an incredibly frustrating experience for everyone involved. Coming after many years of fulfilling work, the insolvency was an emotional and very sad end for every single employee. The Works Council members can take at least some small solace in knowing they did everything possible in attempting to keep the company operating as a going concern.