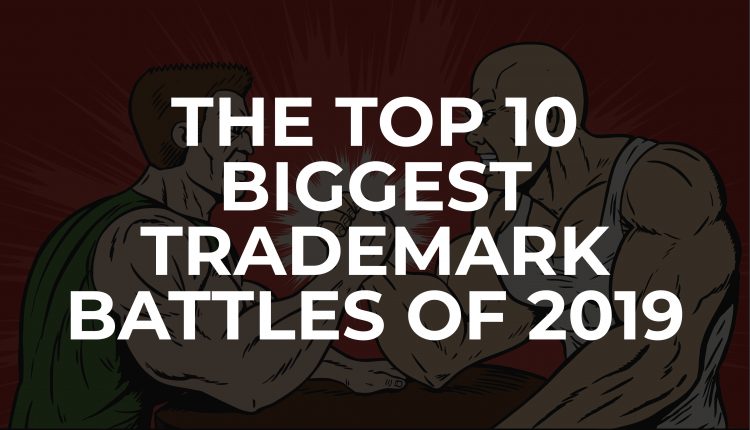 In 2017, we witnessed the famous feud between Adidas and Eleague, as well as a particular confrontation between a leading New Zealand political party and international rapper Eminem. In 2018, we followed a heated battle between the US Girl Scouts and Boy Scouts, as well as the playful fisty-cuffs between popular gaming companies, Fortnite and PUBG.

Throughout 2019 there have been hundreds of highly disputed intellectual property wars, as according to the WIPO, the last few years have seen dramatic spikes in trademark filings and patent applications. Through the course of 2018, there were 3,326,000 patent applications and 14,321,000 classes specified in trademark applications worldwide. The latter figure actually makes up a 15.5% increase from the previous year, having already grown significantly since 2017.

From retail and esports to banking and finance, as more and more trademark and patent applications are filed and established, disputes have also increased. Following on from Lawyer Monthly’s previous round-ups, this year we bring to you the top 10 trademark battles of 2019, offering some insight into each dispute and the overall decision that has been made, or is still to be made.

Perhaps you’ve never heard of Blue Ivy, but you’ve definitely heard of Beyoncé and Jay Z, right? In a fight to trademark the name Blue Ivy, Beyoncé is arguing that her daughter of seven years is a cultural icon, worthy of a trademarked name.

Upon registration of the trademark, the famous musical couple received notice of dispute from wedding planner Wendy Morales, who owns a wedding planning company called Blue Ivy. Court documents reviewed by The Blast claim Beyoncé has thrown out opposing statements that the name Blue Ivy would be confused between the world-star performers’ child and the wedding planning business.

She says, via her lawyers, that the claims are “frivolous,” arguing they should be “refused in their entirety”. She has also pointed out that the trademark registration is for ‘Blue Ivy Carter’, not just ‘Blue Ivy’. Blue Ivy Events, on the other hand, asserts they have been using the name Blue Ivy for much longer than when it was first linked with the 7-year-old.

This case is still up in the air, and the kind of case we are seeing more and more in today’s digital age, where celebrities and brands will go to great lengths to protect potential assets, as will mothers for their daughters.