The Story of an Impressive Art Lawyer

We had the pleasure this month of speaking to Donald Burris, who is an impressive attorney, to say the least, and most known for his work as an art lawyer. 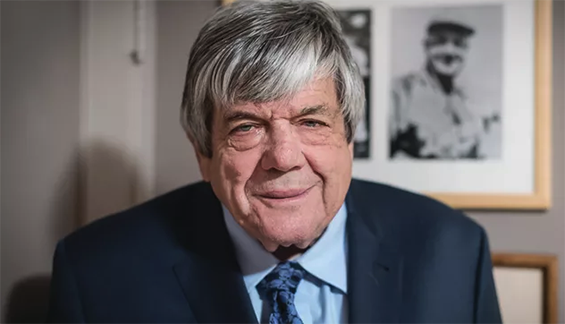 Graduating from Georgetown Law School in the ‘profound’ 60s, Donald speaks about his interesting journey into law.

From speaking to him, we learn valuable snippets of advice, one of them being: to grab opportunities by its horns.

Choosing the legal sector wasn’t a preconstructed journey for Donald. His parents weren’t lawyers and he didn’t have many legal connections prior to starting law school.

“You know, it wasn’t like I had a lot of role models. I watched Perry Mason on TV and a favorite movie of mine was 12 Angry Men, both of which were based on the legal sector. In those days, I didn’t have the same ties as other people did; we weren’t around lawyers that much. It’s funny when you think about it, society was so different in the 1950s.”

You know, I got lucky at times.

After getting married, Donald felt ready to get serious about school and so around the time John Kennedy became president, Donald began his journey into law at Georgetown.

“Going to law school in the early 60s was profound, as people began becoming very interested in the law.”

Where hard work and dedication allowed Donald to be at the top of his class and become Editor in Chief of the Georgetown Law Journal, he dedicates a little of his success to luck and coincidence.

“You know, I got lucky at times. I managed law clerk for James R Browning, a Chief Judge for the 9th Circuit which started my journey into a career as a lawyer.”

But despite this push, Donald moved to Washington where he eventually got selected to work for the Senate Watergate Committee.

“That was an experience that I had never had before, or since. It was very exciting and very interesting”, he tells us.

Being true to his advice of welcoming every opportunity, Donald says that despite this being a little “off-track” for a lawyer’s journey up the legal ladder, his experience at the Watergate remains to be the thing which makes him stand out from the crowd.

Reflecting on his time on the Watergate Committee, he says, “One of the things that I looked into were criminal laws dealing with political bribery, bribery being a very loose word in this sense. Everything was pervasively political. So, we looked into that to see whether there was any legislation for members working for the Congress during Nixon’s term that could be devised. Amazingly, it led to political reform and campaign reforms.”

Even though he has since moved back to Los Angeles, California, Donald is returning to Washington later this year, to collect the annual Paul Dean Award, an award, named after former Law Center Dean Paul R. Dean, which is given to outstanding alumni who have exhibited leadership to Georgetown Law and to the legal profession. And it is no surprise to why Donald has been selected.

Have you ever seen the movie Woman in Gold? It is based on a true story and case – a legal case that Donald worked on, due to, what he refers to as, ‘a happy accident’; the happy accident being him bumping into an acquaintance.

I grew up a young kid in Brooklyn. You know, there are a lot of people who had been at Auschwitz and had tattoos on their arms.

Woman in Gold is based on the  Republic of Austria v. Altmann case which was taken to the US Supreme Court. Donald and his partner, Randy Schoenberg’s client, Maria Altmann, wanted to proceed with a civil action against Austria in a U.S. federal district court for recovery of five paintings stolen by the Nazis from her relatives which were then housed in an Austrian government museum.

Donald tells us the story: “After bumping into Randy Schoenberg in my building 20 years ago, I could sense he was struggling a little in the legal field; simultaneously I was overwhelmingly busy. So, I offered him office space and instead of asking for rent, I asked if he could work with me. The next day he moves down and the rest was history.”

And it was very interesting, as you don’t get cases involving the Holocaust on a factual nature in front of the US Supreme Court. It just doesn’t happen.

Speaking on how Randy fit right in and tackled many cases, Donald explains how they were both quoted on this Jewish case. With both partners being Jewish themselves, they agreed to take on the case, thinking it would be more of a pro-bono style project. Being a Jewish art lawyer himself, Donald goes on to say, “I grew up a young kid in Brooklyn. You know, there are a lot of people who had been at Auschwitz and had tattoos on their arms. This felt quite natural to take on.”

What they didn’t expect was for the case to explode.

“Everyone kept saying how we were lucky. How we were lucky to have won this case. And it was very interesting, as you don’t get cases involving the Holocaust on a factual nature in front of the US Supreme Court. It just doesn’t happen.”

Donald advises that I take some time to watch the movie. “Maria was one of the greatest clients you can imagine. A wonderful woman with great perseverance and Helen Mirren does a great job portraying her.” He then adds: “Ryan Reynolds plays Randy”, Donald, laughing, then says: “And a ghost plays me.”

But he is okay with being missed out on his Hollywood claim to fame. He tells me that when you look closely, “Ryan Reynolds actually looks more like me anyways. That’s what I like to tell those I lecture, anyway.”

Soon after, Randy retired from practising law, and Donald, to this day, remains a Senior Partner at their firm Burris & Schoenberg, LLP.

“I will be 76 in September and there aren’t a lot of really active 76-year-olds around still working as hard as they used to.”

Yet Donald’s passion for law keeps him going, “I refused to stop and fortunately mentally and physically I’ve been OK.”

Specializing in art law is rather a niche legal field. So, I asked Donald how he fell into it.

“I’d been an art lawyer from the beginning really because my wife was an artist. When we moved to California, the art practice intensified for me, because my wife started going to work at a private art school: Brentwood Art Center.

“I represented the Center and when the original founder sold it to someone he trusted, that someone fled back to Armenia and left a trail of unhappy teachers.

“We brought it back. And I have been involved at the Center ever since.”

I’ve talked to a lot of younger people who are dissuaded from law, even by their own parents, and I say to them: ‘even if you don’t want to necessarily be a trial lawyer, get the training because it helps you.

After admitting he has always had an eye for architecture and a creative side, despite not picking up a paintbrush since he was a child, Donald goes on to say “I was always going to be a lawyer, but I really enjoyed creativity and art itself. In that regard, art law helped me build my own creative skill.”

With Donald being a well-established lawyer, I thought it was important for me to see if he had any hidden nuggets of advice for our readers.

“I think training in the law itself is very valuable. A lot has changed from when I began my career. We are inundated right now. There’s a lot of lawsuits out there so that changes the picture. When I went to Georgetown there was the ability to win and I took advantage of it in a very positive sense, to get to know professors. Now the schools are larger and it’s a little harder to be as personal as you could be in the past.”

“But I’ve talked to a lot of younger people who are dissuaded from law, even by their own parents, and I say to them: ‘even if you don’t want to necessarily be a trial lawyer, get the training because it helps you.’”

And Donald didn’t win the Altmann case on a whim. So, I asked how he prepares for a tough case to which he responded: “Preparation. I had to the opportunity to work with some of the best lawyers and they always were prepared, even if they were great at thinking on their feet.

“If you have a tough case, try not to let it overwhelm you. The night before the case should always be relaxed. Try not to be in a position where you’re doing some intensive planning the night before that should have been done prior. Go out to dinner or play some sports, or whatever it is you enjoy the night before a case.”

My profession is the major reason why I get up in the morning and still say ‘I am going to be a lawyer today’.

When I asked Donald what his greatest achievement has been in his 49 years of practice, he jokingly says: “63 years of marriage”, before reflecting on what he refers to as his “real” answer. After pondering on one aspect of his exciting career, he concludes with this:

“The fact that I’ve been able to practice for 49 years and generally help a lot of people in all walks of life. I like to think that most of my clients are very satisfied that I did my best to help them. Their business may have been at stake or something really important may have happened, and I was there to help them.”

Right before we rounded things up, Donald rather gleefully announced a few of his many lectures are now on YouTube. And after suggesting I watch one on YouTube about the Altmann case, he aptly closes our conversation with “My profession is the major reason why I get up in the morning and still say ‘I am going to be a lawyer today’. And I treat  the legal profession with great respect, which I think not enough people do.”

Burris, Schoenberg & Walden, LLP offers comprehensive civil litigation and transactional experience, including civil trials, arbitrations, mediations, appeals, real estate, entertainment, and commercial transactions law.  Our attorneys have practiced before state and federal courts throughout the State of California, as well as before the United States Supreme Court and in other jurisdictions.  Our offices are located in Wilshire-Bundy Plaza, on the north-west corner of Wilshire Boulevard and Bundy Drive in Brentwood, West Los Angeles.