Teaching the relevance of legal history and philosophy to the everyday practice of law, Executive Director Allen Mendenhall speaks on how the Center’s work educates and impacts those inside and outside the legal industry. 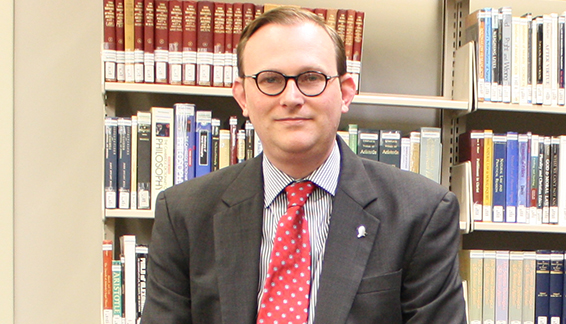 The Blackstone & Burke Center for Law & Liberty examines and promotes ordered liberty in the common-law tradition, including religious freedom, freedom of association, freedom of speech, and economic freedom, and as these freedoms have flourished under the common law and are secured by proper constitutional restraints, the Center explores essential elements of common-law practice and jurisprudence within the framework of American constitutionalism, federalism, and private law.

Can you share how The Blackstone & Burke Center for Law & Liberty has promoted the various forms of liberty in the US, in relation to the law integrated into society?

The Center hosts seminars for state judges across the United States. Judges have grown accustomed to conferences about evidence, procedure, discovery, trials, and other routine matters and practices. By contrast, the Center takes the long view, exploring the historical and philosophical roots of concepts like the rule of law, the separation of powers, federalism, natural law, punishment, restitution, justice, the social contract, and ethics. We want judges thinking about the big picture, for instance: the sources of political authority, or the purpose and effectiveness of constitutional government. Our seminars are small and selective to ensure the robust participation of every judge who attends.

Natural law jurisprudence is often considered a movement of the religious right, and particularly of the Catholic tradition, requiring its adherents to adjudicate disputes by recourse to first principles nowhere enumerated in the United States Constitution.

Judicial officials have the duty of declaring what the law already is; can you expand how the seminars the Center offers can help with this?

Rather than enforcing an orthodoxy or insisting on a single right way to evaluate the cardinal principles that have shaped the American legal system, our seminars require judges to work through jurisprudential tensions and complexities using diverse approaches drawn from important figures such as Aristotle, Aquinas, Hooker, Grotius, Locke, Jefferson, Madison, and Holmes.

For instance, natural law jurisprudence is often considered a movement of the religious right, and particularly of the Catholic tradition, requiring its adherents to adjudicate disputes by recourse to first principles nowhere enumerated in the United States Constitution.

Originalism, however, restrains judges from striking down laws merely on the basis that they seem unreasonable or unjust; it confines judges to the written text of the Constitution. Thus, these two schools of thought associated with conservatism are fundamentally at odds in ways that some judges have never considered. Similarly, judges on the left might examine at our seminars whether the mode of interpretation known as “living constitutionalism” complements, undermines, or fulfills the evolutionary character of the common-law system that developed in England. Whatever their ideological commitments, judges who attend our seminars read hundreds of pages and participate in hours of discussion and come away with a deeper appreciation of their vital role in civil society.

The beauty of the common law is that it unfolds in unforeseeable stages.

Can you share more about the educational programmes for students and how the Center aims to impact the future legal generation?

The Sir Edward Coke Fellowship program is for exceptional law students, who meet regularly with me about their courses and career goals. I bring them with me to conferences and to the offices of judges and public officials for learning and networking. The program involves heavy extracurricular readings that we discuss periodically over dinners.  The Center also hosts programming for students at other universities. We recently held seminars in Philadelphia and Washington, D.C., that drew students from all over the country, including schools like Harvard and Georgetown.

The beauty of the common law is that it unfolds in unforeseeable stages. We don’t yet know the full effects of digital media, social media, and instant interconnectivity on the future of the common law, which has endured dramatic technological and political changes over the centuries.

Executive Director, The Blackstone and Burke Center for Law and Liberty

Allen Mendenhall is Associate Dean at Faulkner University Thomas Goode Jones School of Law in Montgomery, Alabama, and the Executive Director of the Blackstone & Burke Center for Law & Liberty.