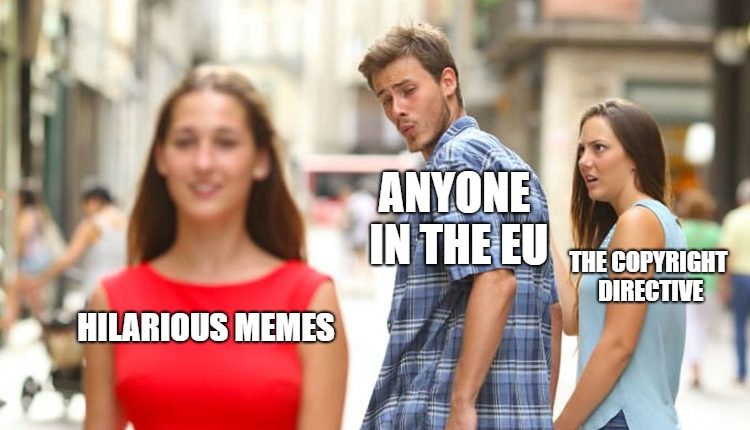 From exploiting Spongebob Squarepants to Kermit the Frog and making Grumpy Cat one of the richest cats after she earned $100 million in around two years, memes have taken the internet by a storm.

By being “an element of a culture or system of behaviour passed from one individual to another by imitation or other non-genetic means[1]”, the internet has famously created memes by captioning photos with quotes riddled with sarcasm to often ridicule human behaviour, and editing videos for an added humorous effect.

The bank of internet memes has endless submissions, and its popularity has spread like a more welcoming version of a 21st century plague, so it is of no surprise it has proved an effective method of advertising, to even the most known internationally renowned companies.

Take Virgin Media, for example, that used the viral photo of Success Kid as part of their advertising campaign. The photo, originally taken by the mother of the child was uploaded to Flickr, eventually became victim of witty captions and ingenious Photoshop manipulation, and took to the internet by a storm.

In the US, Denny’s – famously known for being social media ‘savvy’ – jumped in on the ‘zoom in trend’, where users have to zoom in on pictures to reveal hidden messages. If you missed out on this craze in 2017, it may make very little sense to you, however, Denny’s clever meme use managed to win the company the title of creating one of the most shared brand tweets.

zoom in on the syrup pic.twitter.com/omRBupjrXq

If you are not sold on the popularity of memes, I will conclude my pitch on the power of memes with a final example. Hipchat (now Slack) used the Y U NO meme on their billboard advert, which saw traffic to their website increase by a whopping 300%[2].

They are an effective tool for marketing, especially when targeting a younger demographic, however, as you probably may have already gathered, copyright law may pose an issue. Grumpy Cat, for example, is registered with the US patent and trademark office, so her cantankerous demeanour can only be the face of your company’s meme if you gain permission.

And no one is exempt. Even the acclaimed Warner Brothers were sued after an alleged unauthorised use of clips of Nyan Cat and Keyboard Cat – famous internet memes which each spurred tens of millions of views since originally appearing online in 2011 and 2007 respectively.

So in short, using memes on a personal platform for fun and not commercial gain, may be deemed more acceptable than using memes for advertisement.

What are the copyright laws?

Firstly, a meme’s legal framework can be defined as follows:

Generally, the criteria of whether a meme is deemed as infringement is based on four things: the purpose behind the meme, i.e. if it was used for profit; the nature of the work; how much of the work has been used; and, how the use impacted the potential market for the copyrighted work[4].

So in short, using memes on a personal platform for fun and not commercial gain, may be deemed more acceptable than using memes for advertisement.

And even though the original owner to a humorous photo may not take action to sue, gambling with the idea is a risk that businesses should avoid.

And that is not where it ends, of course. Earlier this year, the EU proposed a new copyright directive, which could see even more restrictions and confusion, especially regarding our beloved memes.

Time for a New Law?

It is generally a gamble when a company hops onto the meme trend; you either win or fail. But, to make things more difficult, there are further changes on the horizons.

There are several other issues when it comes to social media advertising. With the FTC enforcing rules and regulations over the years, one of the most prominent ones regarding social media, is to ensure endorsements are not misleading.

The ambiguity between promotion or an innocent post causes several issues which the FTC, and consumers themselves. Nonetheless, social media has really paved a new path for advertising; I, for one, have noticed a shift in promoting products online, to the point where you need an influencer to state ‘not sponsored’ to be fully confident that they are not getting paid for their views on said product, even though it is required for influencers to ‘#ad’ their promoted posts.

And that is not where it ends, of course. Earlier this year, the EU proposed a new copyright directive, which could see even more restrictions and confusion, especially regarding our beloved memes.

Speaking to Jack Dickerson, an Associate from EIP, he explains where the motion to update the Copyright Directive came from: “Given that the existing copyright directive is now over 17 years old, and considering how quickly the online space moves, there are few who would disagree that this is necessary. However, not everybody is enthusiastic about the actual content of the Directive which is due to be implemented next year.”

The new proposal will enforce that websites – including social media – should regulate copyrighted material that may be circulating on their platforms. Right now, it is up to those who produce the content to keep an eye on who is using their work.

Article 13, or as it is also known as: “meme ban”, is a chance for content producers to get the rights (and money) they deserve; but if websites, such as Facebook or YouTube are held liable for copyrighted content, some nifty software will need to determine what has been stolen, or what has been used in good faith. 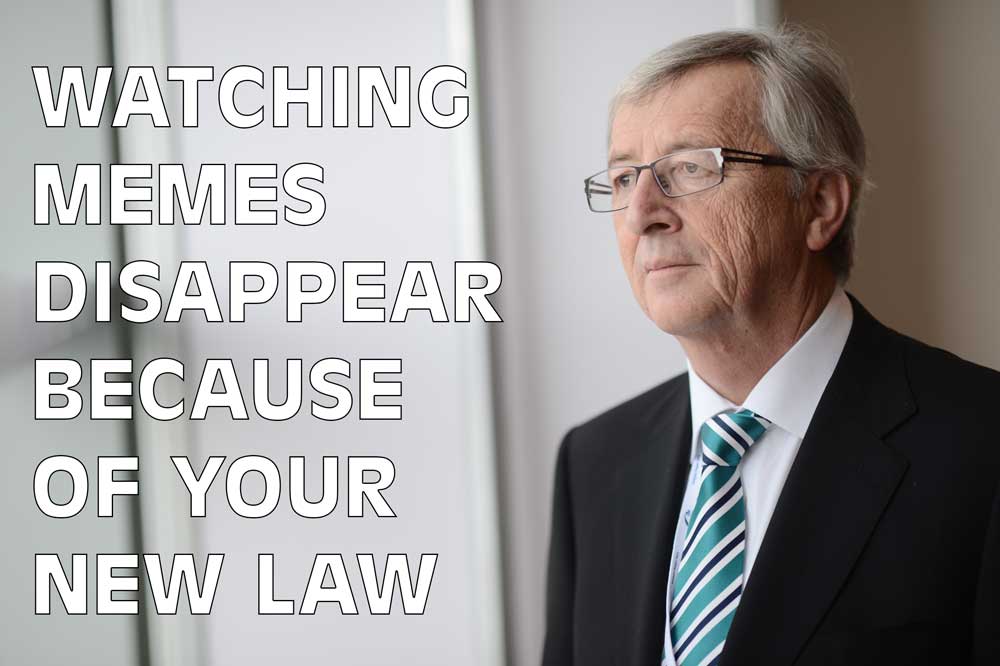 Firstly, such software may struggle to sift through millions of pages of content, and secondly, may not be able to spot parodies, creative content, and, of course, memes[5].

This could make journalists’ lives a lot harder, an increase of fake news and restriction on, again, freedom of expression on the internet.

“The threat to memes from such a system is two-fold: Firstly, existing content identification technology is far from perfect – anybody who makes a living from YouTube will be aware of how YouTube’s often overzealous algorithm demonetises content from which creators earn a living.

“Secondly, such technology may simply not be readily available to smaller platforms which may not have access to patented systems or the money and expertise to implement them effectively. These smaller platforms may have no choice but to implement blanket restrictions on post-able content, or otherwise cease competing with the big boys – further entrenching their market position.”

And where some artists will be pleased knowing that there are extra regulations in place to ensure their work is not being infringed, sceptics are worried that the directive will restrict free and open internet and give more opportunities for media giants to charge fees for posting simply links[6]: i.e., ‘link tax’ (Article 11).

Jack expands on the apprehensions towards Articles 11 and 13 and explains how in a letter dated 12 June 2018, over 70 industry experts, including inventor of the world wide web, Tim Berners-Lee and Wikipedia founder Jimmy Wales, wrote to the president of the European Parliament Antoni Tajani, urging him to vote for the deletion of the now infamous Article 13 from the proposed Directive on Copyright in the Digital Single Market, arguing that the Article represents an “imminent threat to the future of [the internet]”[7]. Three months later, on 12 September 2018, having rejected a number of tabled amendments, MEPs voted in favour of Article 13 and the similarly controversial Article 11 to the same directive, dubbed the “Link Tax”, both of which, subject to internal discussion on the final wording, will enter into force some time at the start of 2019.

Unless computers learn to identify humour or mockery, which doesn’t seem terribly likely, some human judgment will still be necessary to ensure that CRT solutions are proportionate and fair to both the copyright owner and the public at large.

“The Commission wants to generate income for European publishers by allowing them to charge internet platforms for displaying snippets of their content to users. Stated targets are Google, Facebook, Twitter and Pinterest, who use such snippets in the course of linking to news articles.”

This could make journalists’ lives a lot harder, an increase of fake news and restriction on, again, freedom of expression on the internet.

However, not all is bleak. We heard from Dr Sean Jauss, Partner at IP law firm Mewburn Ellis, who shared this thoughts on the matter: “The Directive will not ban memes, but it may stifle them.

“For another, there are exemptions from copyright infringement that may apply to many memes, specifically the right to parody and satire. These exemptions were, perhaps ironically from the perspective of some users, included in EU law by an earlier copyright directive, the InfoSoc Directive. To benefit from the parody exemption a meme will need to evoke the existing work and be an expression of humour or mockery, both of which are cornerstones to many memes.

For example, what will an individual in one country with comparatively strict content filters see when a friend in another country is able to upload content which would be restricted in the first country and what effect will this have on the ability of users to share information and ideas; how will it impact the ‘social’ aspect of social media?

“The difficulty is whether the “content recognition technologies” (CRTs) will be able to distinguish between infringing works and parodies. Unless computers learn to identify humour or mockery, which doesn’t seem terribly likely, some human judgment will still be necessary to ensure that CRT solutions are proportionate and fair to both the copyright owner and the public at large.”

With the vote for the Directive not being finalised until Spring 2019, we cannot know for sure whether witty memes could see companies being penalised, but what we do know, is that where social media reaps benefits, it also brings a suitcase full of more dilemmas for the legal sector to solve.

As Jack concisely concludes, in an ideal world, a modern Copyright Directive would seek harmony between the rights of Information Society Service Providers, Rightsholders and Individuals, however, the time for accommodating this at the EU level has passed. It will now be up to the governments of member states to find this balance through national legislation, the result of which will be legal uncertainty and additional hurdles to overcome for service providers wishing to operate Europe-wide.  For example, what will an individual in one country with comparatively strict content filters see when a friend in another country is able to upload content which would be restricted in the first country and what effect will this have on the ability of users to share information and ideas; how will it impact the ‘social’ aspect of social media?