Kika/Leiner property assets in Austria acquired by the Signa Group 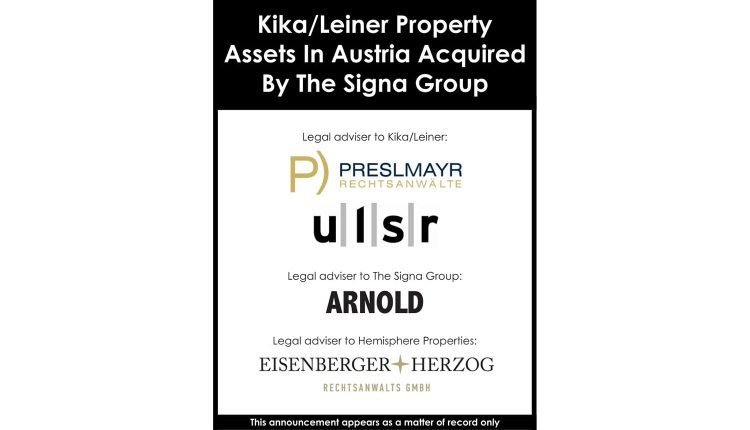 The SIGNA Group has submitted a purchase offer for the furniture chain kika/Leiner to the Steinhoff Group. This bid includes both the operational commercial business, with its some 5,500 employees, as well as the approximately 70 real estate locations in Austria and CEE, and means an Austrian solution for the company. Steinhoff has accepted the offer from the SIGNA Group.

The takeover means that the threat of insolvency to this Austrian company, steeped in rich tradition, can be averted, and its continuation assured. In the weeks to come a comprehensive and far-reaching concept for restructuring and setting the course for the future will be worked out jointly with the company management. This will include all the structures and processes in the company being carefully examined and improved.

“The company has great intrinsic value. After carrying out a careful analysis, we are absolutely certain that the company can be put back on its feet and be successful once again. Our focus is set on creating a sustained and financially secure perspective for this Austrian company with its rich tradition and its dedicated staff”, says Dr. Stephan Fanderl, Managing Director of SIGNA Retail.

For the SIGNA Retail Group, the takeover of kika/Leiner means that, in addition to its successful trade participations in Germany and in European sports e-commerce, this will be the company’s first venture in the brick-and-mortar retail sector in Austria.