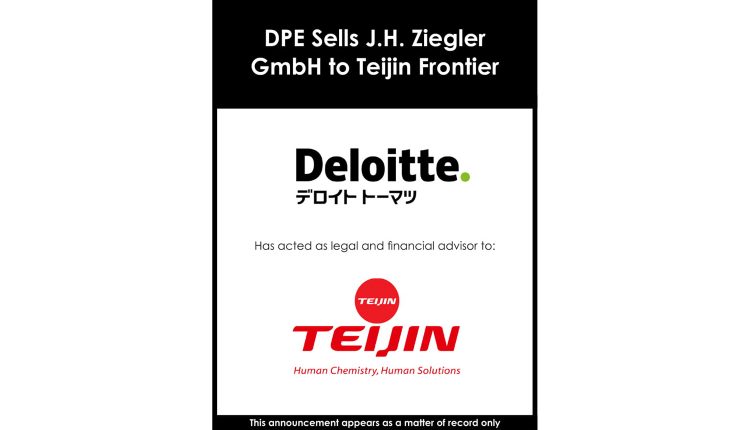 Teijin Frontier Co., Ltd. is a wholly owned subsidiary of Teijin Ltd., a Japanese chemical and pharmaceutical group with around 20,000 employees and annual sales of more than € 6 billion. The company is listed on the Japanese stock market (WKN: 855254/ISIN: JP3544000007).  Its subsidiary Teijin Frontier Co., Ltd. specializes in the manufacture of clothing and industrial textiles, so that the takeover of Ziegler represents an attractive expansion of its portfolio, whilst simultaneously enabling entry into the European market.

In 2014, DPE acquired a majority shareholding in Ziegler with the intention to achieve significant growth through extensive investments in production technology designed to expand specific capacities and streamline the product portfolio. “We are pleased that we – together with the management team of Diedrich von Behr – could demonstrate Ziegler’s full potential”, commented DPE partner Dr. Frank Müller. Furthermore, Ziegler has, under DPE’s direction, established sales offices in the US and China. From this basis of growth, Ziegler acquired additional high-profile customers in the US and Asia, and created new vehicle platforms in Europe. Sales have increased under DPE management from € 44 million (2013) to over € 75 million (2018e). The number of employees increased in parallel by almost 50 % to more than 400.