Gender Pay Gap: Why is the Legal Sector Failing? 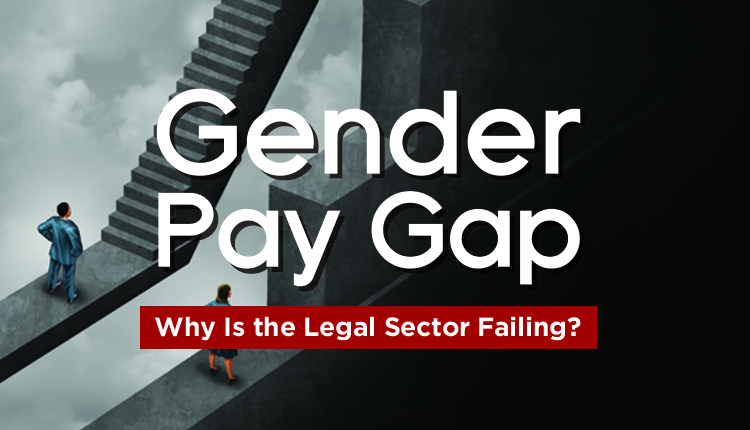 This month, in a special Lawyer Monthly feature we decided to take a look into the surprising reports around the gender pay gap. Even though most suspected a level of disparity, no one had really quite predicted the sheer gap between both genders and how there is still such a way to go until women are given the same opportunities as men.

The legal industry, of course, was not exempt from this. So, what is next? We know that it is a widespread problem, but what are law firms doing about the issue?

We spoke with two of the top 100 UK law firms on this report and the steps they are taking to tackling the gender gap problem.

The Associate Justice of the Supreme Court of the United US once stated: “Women belong in all places where decisions are being made… It shouldn’t be that women are the exception”; such a quote remains true in all areas, even the modern workplace.

Earlier this year, companies in Britain had to report details regarding the pay gap between genders and unsurprising for some, yet a shock to others, the results presented quite a disparity between men and women.

The figures had revealed that if you are a woman working at a large UK firm, you are on average more likely to be paid less than men, with 78% of companies paying men more. A contributing factor towards this is due to the fact men tend to be hired for higher paid roles and are paid higher bonuses than their female counterparts.

The legal industry also portrayed such bias and criticism. When reports began to sift through, the results did not seem so bad. The average gender pay gap for the 25 largest UK firms (by revenue) was at 20%[1]. The firm’s median pay gaps[2] were higher than the mean pay gaps; some of the highest mean gender pay gaps were: Lathan & Watkins at 39.1%, Wei Gotshal at 38.1% and Kirkland & Ellis at 33.2%. The lowest mean gap included Forsters at 2.3% and Irwin Mitchel at 12.8%.

These reports sparked controversy, however, as many law firms were criticised for excluding partners from their pay gap reporting; with the Equality Act 2010 Regulations stating that firms need to release the statistics of employee’s pay, many big firms excluded partners with their reason being due to the fact that equity partners are not ‘salaried employees’. Many expressed this was unfair as it kept secret the most senior, well-paid and mostly-male lawyers.

A level of transparency was needed and some top firms, such as Clifford Chance knew this. Laura King, the firm’s global Head of People and Talent stated: “Unless you’re transparent you don’t really understand what’s going on in your organisation. Excluding partners, we felt would not give us the opportunity to examine ourselves.”

From this, some law firms buckled under the pressure and showcased the statistics of all employees. 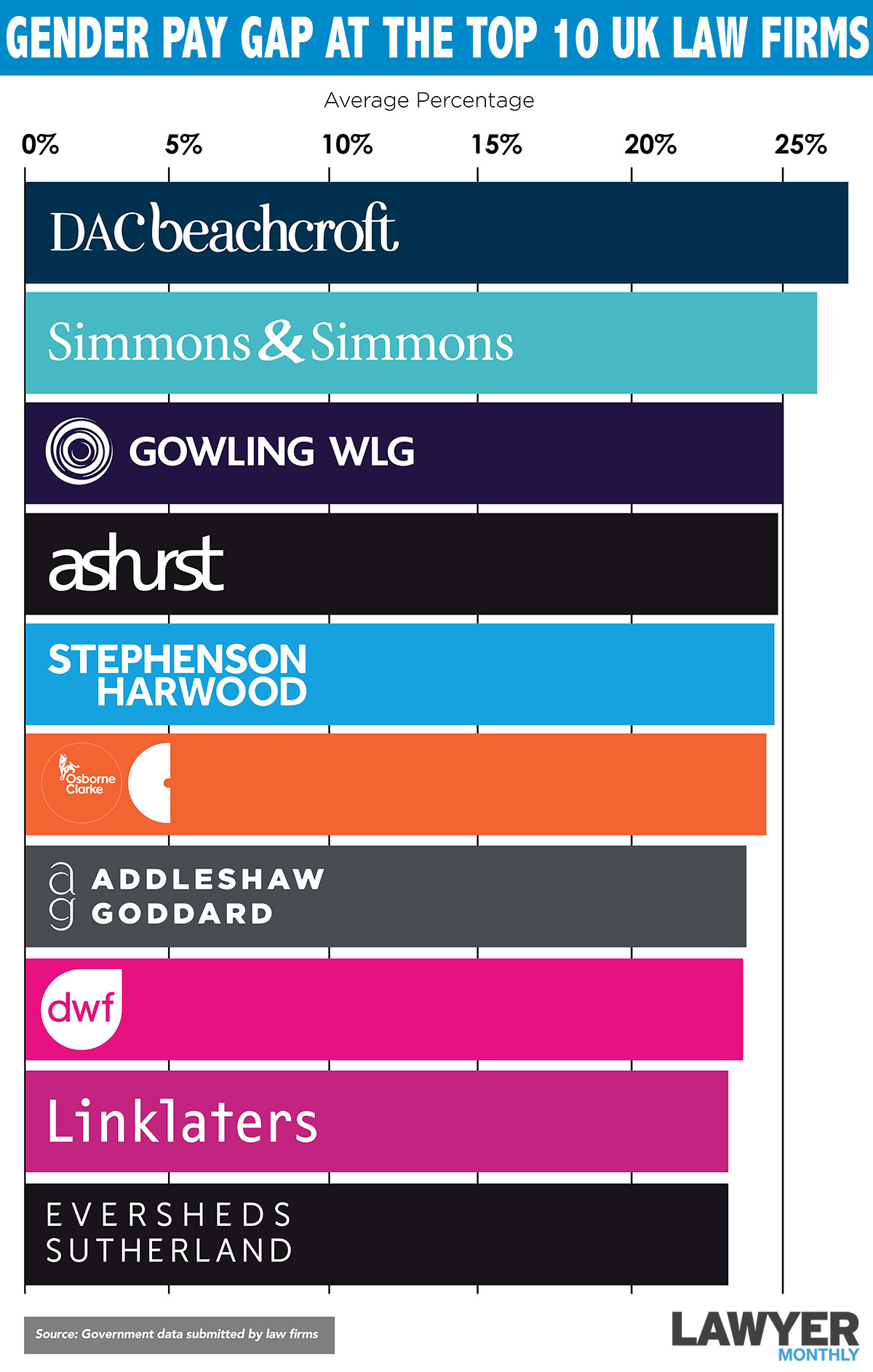 WHAT CAUSES THE GENDER PAY GAP IN LAW?

What are the reasons behind this disparity and what can be done? We hear from two of the UK’s Top 100 law firms: Keystone Law and Holman Fenwick Willan (HFW)* who speak on what they are doing to tackle the gender pay gap.

There are several reasons up for debate here. One of the main reasons behind women being paid, on average, less than men, is the fact that there are more male partners than female.

From a study conducted by the SRA in August 2017, they found that women make up 48% of all lawyers in law firms (and 47% of the UK workforce). Seniority made more a difference, however, with women making up 59% of non-partner solicitors and the larger law firms (with 50 plus partners), showing women make up 29% of partners.

Even Slaughter & May had highlighted that their gap is widened significantly due to the all-female secretarial positions.

A spokesperson at Keystone Law, one of the UK’s Top 100 law firms, stated: “Many firms claim to have a diversity plan in place but invariably it’s more talk than action. What really makes an impact is truly recognising talent and showcasing ability.”

Keystone Law is not a traditional law firm, having chosen to go against the grain by eradicating the partnership model, in favour of a flat structure for all fee earners who have almost all been partners at some of the country’s leading law firms. All Keystone lawyers come on board at the same level and hold the same title. Of the lawyers Keystone currently engages 40% of them, are female. This stands in stark contrast to 18% of partners at Top 10 firms, as cited by PwC’s Law Firm Survey 2017.

HFW said: “Ensuring higher levels of female representation at the highest levels of the industry, particularly among partnerships, has been high on the law firm agenda for years, but we need action, not words. More firms should set defined targets, as we have, and be more proactive.”

Steps they have already taken (as part of our gender equality action plan) include:

They expanded: “The percentage of female fixed-share partners at the firm has increased from 12% in 2015 to 26% today, while women account for 50% of our new Legal Director roles. Over 40% of the firm’s internal partner and legal director promotions over the last two years were women.”

At the lower end of the pay scale, there are significant issues of gender stereotyping. The vast majority of secretarial services staff – not just in the legal industry, but more generally – are women, for example.

Commenting on the matter, HFW said: “This is harder to resolve. A law firm would currently find it challenging to achieve gender equality in that role due to a lack of male applicants. It is possible that law firms could visit schools to provide students with a broader outlook on future careers and we can adapt how we speak about secretarial roles so that they are attractive to men as well as women. This will be a longer-term challenge.”

UK law student figures show that 67% of applicants in 2016/2017 were female. We asked HFW: Will this ultimately lead to a redressing of the balance, or do you think law schools have a continued responsibility to enrol more females?

“This is not a new phenomenon – there have been high levels of female lawyers coming into the profession for a relatively long time. It is important that law schools maintain a strong pipeline of male and female graduates, but this alone will not redress the balance.”

Problem: Women have a parental responsibility

The imbalance of men and women in the legal sector is often said to be due to parental responsibilities, which traditionally lie with women. We ponder on the thought that law firms need to offer solutions that will help re-dress the balance and thus the perception of the sector, (i.e. flexible working hours, allowing male staff to take on more parental responsibilities and part-time working for male staff).

“Because of their perceived reliability and stability, husbands and fathers in the workplace are often more likely to be given pay increases and promotions. Unfortunately, the opposite still seems to be true for women with children, whether they are married or not! The sector therefore needs to concentrate its efforts on removing any stigma that is attached to mothers as well as fathers who require flexibility and agility in order to look after their families”, replied Keystone.

With Keystone’s business model allowing lawyers to work on their own terms (including earnings), they state: “Many of the reasons women, in particular, cite for being driven out of the legal profession are absent from the Keystone model. There are no set billing targets, lawyers can work from any location that they choose and work the hours that best suit them. This works towards re-dressing the balance of parental responsibilities as both men and women can tailor their practice to suit them – without worrying about being penalised for requiring flexibility.”

“Interestingly the shift towards the desire for greater flexibility is increasingly stemming from millennials. According to a recent Deloitte report, up and coming lawyers are increasingly being inspired by the growing gig economy, realising that earning well doesn’t need to involve being chained to a desk during fixed hours. Not only that, these young lawyers are rebelling to demand a better balance — and influencing those more senior to them in the process!”

HFW have a similar solution at hand: “We offer flexible working hours to all fee-earners, male and female, and also offer extremely generous shared parental leave to male employees at a rate well above the statutory requirement. But the industry could do more, such as lobbying government to come up with practical and pragmatic solutions that will encourage a societal change to parental responsibilities. We are keen to work with others in the sector to progress this.”

It has been suggested that this is a client level problem, being that clients may prefer male representation. Is this true?

HFW commented: “We disagree. Gender diversity, and diversity more generally, is an issue that clients now take incredibly seriously. Clients are increasingly asking law firms for diversity and inclusion data as part of the pitch process.”

If you don’t have a diverse team, the chances are that you won’t win the work. The problem is with the law firms, and we can achieve more by working together with our clients on this issue.

Short answer: Yes. UK law student figures show that 67% of applicants in 2016/2017 were female. Could this ultimately lead to a redressing of the balance, or do law schools have a continued responsibility to enrol more females?

HFW said: “It is important that law schools maintain a strong pipeline of male and female graduates, but this alone will not redress the balance.

What Can Law Firms Do?

Introduced a gender equality action plan in 2015 as part of a review of our broader Diversity & Inclusion strategy. This included setting an ambitious target of having 30% female fixed-share partners by 2020 – they are currently at 26%.
Regularly review their Diversity & Inclusion strategy and initiatives to make sure that we are doing everything we can to most effectively tackle this issue.
All employees at the firm, irrespective of gender or role, are able to question their individual remuneration. This process is managed by the HR team.
Appointed Diversity and Inclusion Champions in each of their 18 international offices that are tasked with raising awareness, supporting initiatives and calling out bias.
Provides training to all lawyers, such as networking and presentation skills training, which has been particularly popular with women.

Remunerates all lawyers equally via a meritocratic structure.
Lawyers gain a significant percentage of everything they bill.
Greater ownership over client relationships and fee agreements, giving important competitive advantage.
Aside from business infrastructure, a change in attitude across the sector is needed to help all firms reach equality.

Since the reports, there has been a surge of motivation to ensure the gap is narrowed. Whether is it the attitudes towards women in the legal workplace needing to change, or the traditional working models for our contemporary lawyers,  there will be a strong push towards equality, which will, without doubt, change the legal sphere in the future.

*Based on revenue, Keystone is currently ranked 94 and HFW is at 28, according to The Lawyer