A group of investment companies around Invest AG, ILAG and the management team has acquired Cycleenergy, an Austrian operator of heating and pellet plants. 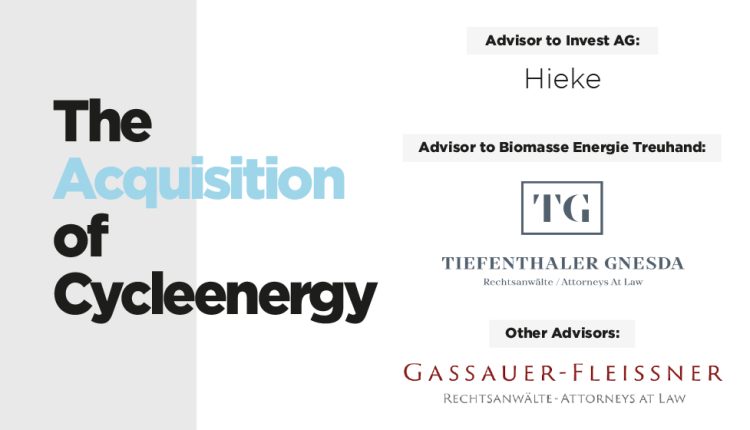 Hieke advised buyers Invest AG, while Tiefenthaler Gnesda advised Biomasse Energie Treuhand as a minority shareholder on the assignment of their shares in the Austrian company. The existing management team was advised by Gassauer-Fleissner. The deal awaits regulatory approval.

The deal sees a group of investment companies led by Invest AG acquiring Cycleenergy’s heating and pellet plants. The investors have announced the provision of funds for a new pellet plant in Aschach an der Donau, where Cycleenergy has been running a combined heat and power plant for 600 households since 2007, which runs off biomass. The new biomass plant, which is slated to be the first of several, is scheduled to begin operation in December 2022.

Currently, Cycleenergy produces around 90,000 MWh of base load green electricity and serves 65,000 households and companies with 100,000 MWh of heat and 10,000 MWh of steam per annum. The company operates four combined heat and power plants in Gaishorn, Gresten and Aschach as well as in Erndtebrück in Germany. Three of its existing locations also house pellet plants.

DealsM & A
By Lawyer Monthly On Nov 30, 2022 0
0
Share FacebookTwitterGoogle+EmailPinterestLinkedinTumblr