Appleby advised Karate Combat on its launch of a decentralised autonomous organisation (DAO), becoming the first professional sports league to do so. The DAO will be launched in the coming months. 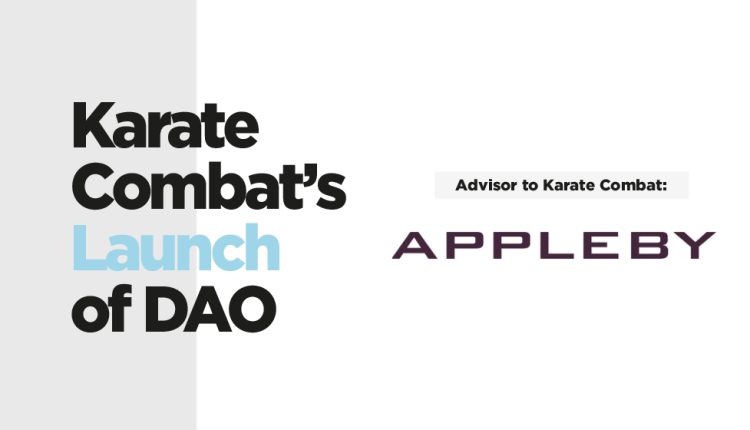 The project comes as part of a three-year sponsorship with The HBAR Foundation, part of the Hedera blockchain. The DAO will enable holders of ‘$KARATE’ governance tokens to vote to determine the league’s budget, marketing strategy, resource allocation, supplier selection and rules changes, as well as fighter contracts and fighter match-up selections (within parameters to be determined by the league’s fight operations group). Half of the tokens will be distributed over time for free between participants in the DAO from the Karate Combat community and users of the organisation’s Up Only Gaming app.

Karate Combat League President Adam Kovacs lauded the initiative as a means of granted fans greater control over the franchise. “When the DAO launches, Karate Combat fans and fighters will participate in governance, which will provide unmatched levels of interaction and engagement at all levels of our community,” Kovacs said in a statement.

Please tell us more about the role you and your team have played during this launch.

Working closely with the in-house legal team and onshore advisors, Appleby’s Global Technology and Innovation Group provided advice on the choice of offshore jurisdiction, wider corporate structuring, local regulatory and licensing requirements and intellectual property matters. Appleby worked with the Karate Combat team to ensure that the chosen legal structure reflected the longer-term goals of the project and that the governance and voting arrangements would provide fans with the level of engagement and control that the founders were keen to achieve.

What unique considerations have to be taken into account when advising on the launch of a DAO?

A DAO is a relatively new type of organisational structure involving multiple participants. There is no ‘one size fits all’ DAO model and the structure therefore needs to be tailored to the goals of the individual project.

DAOs can be contrasted with more traditional forms of private organisation, which often operate with less transparency and have more centralised governance structures. While DAOs are sometimes likened to unincorporated associations, many DAOs will still include a recognised legal form or incorporated entity at its core. Over time, as the arrangement becomes more decentralised and decision-making is increasingly passed to the community, many DAOs choose to retain some form of legal wrapper.

Where to domicile that legal wrapper and the type of vehicles to use are therefore key considerations. Many jurisdictions have different legal, regulatory and tax requirements that can impact those decisions. Limited liability companies, trusts and foundations are popular vehicles of choice for DAOs as they offer greater flexibility for community governance.

The governance and member voting arrangements are also critical to the success of the DAO and need to be carefully drafted. Those arrangements must also dovetail with the longer-term goals of the project. As with the choice of jurisdiction, professional advice should always be sought.

Do you foresee future moves towards decentralisation in the wider sports sector?

Definitely. One of the key drivers for Karate Combat was the recognition that sports fans now engage with content in very different ways and want to be active participants in the action rather than passive viewers. The DAO model offers the potential for a community of fans to govern and shape the future direction of their chosen sport, giving them unprecedented access, engagement and interactivity. From the sport’s perspective, offering fans a stake in governance and direction provides an opportunity to build loyalty in a completely new way.