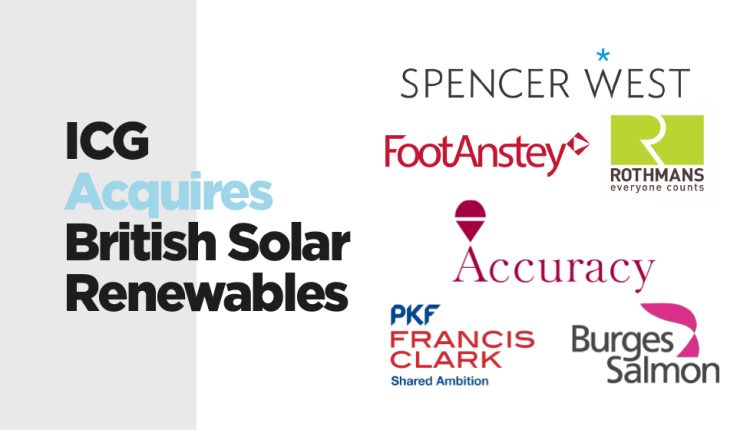 Founded in 2011, BSR is one of the UK’s largest integrated solar developers. Since its inception it has developed, built and operated nearly 1 GW of solar and energy storage plants throughout the country.

ICG is a global alternative asset manager and the new majority owner of BSR, having purchased the business from Siem Europe. The company has stated that the current BSR management team will remain shareholders and work alongside the company to continue developing the renewable pipeline with the aim of helping the UK achieve its net zero emissions goal by 2050. ICG intends to support BSR’s growth from a developer to an integrated power producer in the UK, aiming for a renewable energy capacity of 1.5 GW within five years – enough to power 375,000 homes annually.

Jo Probert, corporate partner at Spencer West, acted on behalf of BSR during the transaction, orchestrating the disclosure exercise process and negotiating all corporate documentation for the sale to ICG. The process was complex due to BSR’s having a number of “shovel ready” solar parks in stock while having sold various others over time. As well as this, BSR owned a large number of companies both trading and project in several jurisdictions. Jo, who is also an expert on transactions involving solar parks, has worked with BSR since 2010 and used her detailed knowledge of its past transactions to aid in this sale.

DealsM & A
By Lawyer Monthly On Sep 30, 2022 0
0
Share FacebookTwitterGoogle+EmailPinterestLinkedinTumblr