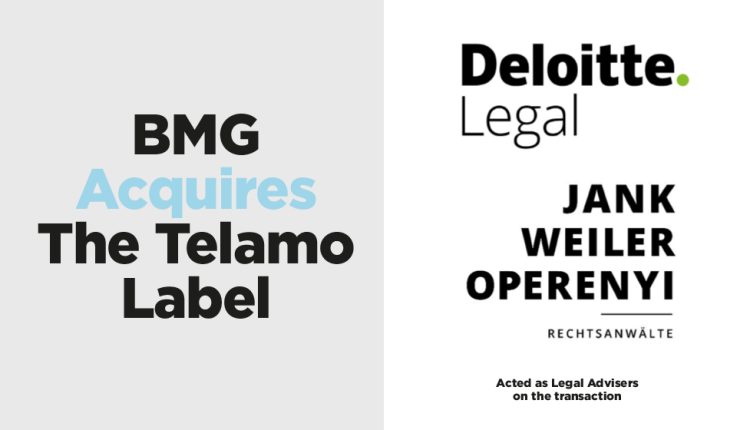 Deloitte provided advice on financial valuation aspects and all legal concerns involved in the transaction.

The deal, which was secured in a competitive process, will create a combined market share of 8.5% with one of the largest genre-spanning German label divisions. This marks BMG’s biggest label investment since its purchase of Nashville-based BBR Music Group in 2017 and its biggest single label acquisition in Germany to date. In addition to Telamo and its labels, the acquisition includes digital business Schlager für Alle, which boasts over 1.7 million users across various social media outlets.

Founded in 2012 by Kathleen Herrmann, Ken Otremba and Marko Wünsch, Telamo is a mainstay of the German music industry. Eight of the country’s Top 25 Schlager/Deutschpop artists are signed to Telamo, and its combination with BMG will create new cooperation opportunities for these artists through its new sister companies. The company will continue maintain its offices in Munich and Berlin following the acquisition. It will also retain its 29 employees, including Managing Director Ken Otremba, with Kathleen Hermann and Marko Wünsch remaining with the company as consultants.

Marko Wünsch, sole shareholder of artcom-Gessellschaft – the majority shareholder of Telamo – praised Deloitte Legal’s involvement in the transaction. “We have been working with Deloitte in a trusting manner for many years,” he said. “At all times, we have not only received first-class advice, but also preparation and support.”

DealsM & A
By Lawyer Monthly On Aug 31, 2022 0
0
Share FacebookTwitterGoogle+EmailPinterestLinkedinTumblr