Pisa-based firm BBP Legal advised Acquastop S.r.l. on its sale to Steelone S.r.l.. The terms of the transaction were not disclosed. 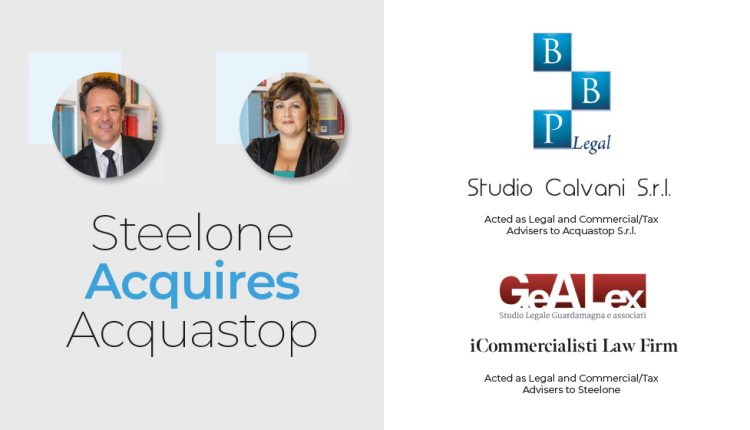 Acquastop S.r.l., also based in Pisa, is a player in the architectural and structural metals manufacturing industry that specialises in the construction and marketing of bulkheads and anti-flooding systems. The company boasts an annual revenue of more than $2 million. With this transaction, it joins the five companies already operating under the Steelone umbrella.

Lawyer Monthly had the pleasure to speak with Giampaolo Benedetti Pearson, Partner, and Marika Bruno, Founder at BBP Legal to give us some further insight into this transaction:

Can you please give us a brief overview of this transaction and the crucial objectives that needed to be achieved?

The transaction for the sale of Acquastop S.r.l. had a series of complex issues to face and solve. The entire deal involved performing a due diligence on accounting, commercial and legal issues, so the accounting and legal teams worked together from June until the end of 2021. The main difficulty was to establish a market value of the company, considering the estates owned, the fleet of vessels involved, the employees and, last but not least, the IP portfolio. It all started with the signature by the parties of a MOU which set the main points agreed by the parties on the sale transaction.

What were your team’s roles during the acquisitions, and what skills were you called to draw upon?

What IP concerns had to be taken into consideration during the transaction?

Our team had to conduct an intense due diligence to confirm the existence and validity of all IP rights, which were the target of the entire sale transaction. Therefore we analysed each IP right to confirm they were not expired, that all taxes had been regularly paid, and that there were no pending oppositions or refusals which could affect their validity.

The transaction for the sale of Acquastop S.r.l. had a series of complex issues to face and solve.

Did you also assist on contractual matters?

Yes, our team drafted the agreements to transfer the ownership of the IP rights to convey them first all in Acquastop S.r.l., thereafter all in the name of the purchaser. Lastly, we ensured that all the points agreed in the MOU had correctly been inserted in the final agreement of Acquastop S.r.l..

Were there any particularly difficult aspects of company law that came to the forefront during your work on the deal?

This deal should definitely be considered a complex one due to the many IP and company law issues that needed to be solved. In relation to the company law issues, some particularly critical points were the calculation of the shares percentages to be assigned to the purchasers, especially in relation to what was said in the latest company balance, the preparation of the minutes of Acquastop’s S.r.l. board meetings to ensure compliance with the applicable laws (the Italian Civil Code), and the compliance of the bank guarantees issued by the purchasers to ensure payment of the amounts agreed by the parties for the transfer.

Do you have any further comments to make about your work in representing Acquastop in its sale to Steelone?

It was an important operation between two important SMEs in Tuscany,  which entailed involving a number of professionals from different sectors. We are happy and thankful that the previous owners of Acquastop S.r.l. referred the legal issues to us. Furthermore, it was most interesting to be able to confront our ideas and expertise with other professionals.

DealsM & A
By Giampaolo Benedetti Pearson On May 31, 2022 0
0
Share FacebookTwitterGoogle+EmailPinterestLinkedinTumblr