Travassos Albuquerque & Associados has advised on the distribution operation and launch in Portugal of the new “GLO” heated tobacco product, owned by British American Tobacco (BAT). 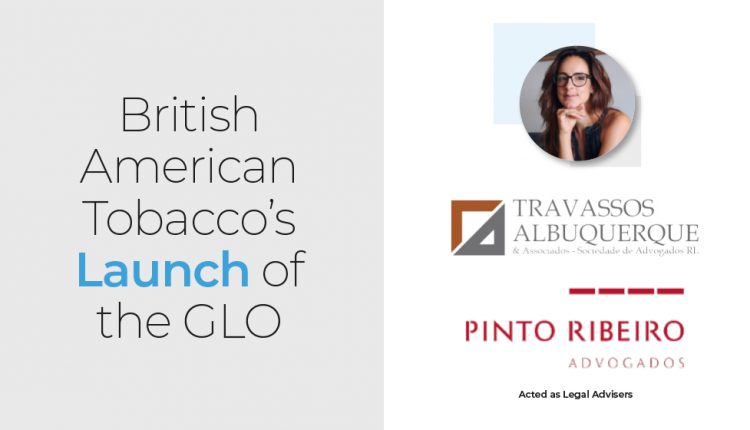 The device is already being marketed in Portugal with the prospect of expanding into other markets, thus representing a significant investment by the company and related companies, such as distributors in Portugal, namely INTG, the company represented by the law firm.

The process of preparing the Portuguese launch of the product involved questions of coordination between different entities and adherence of procedures to relevant legislation, arising in particular from Law 37/2007 of 14 August and from the GDPR rules framework, among other areas.

“[The process] was an opportunity to further deepen my knowledge and experience in this industry, which raises several doubts of interpretation and application,” said Inês de Almeida Albuquerque in a statement. “[The GLO’s] development and adaptation is only possible through the use of different institutions and the support of operators and companies, multidisciplinary and highly specialised teams dedicated to this project.”

Lawyer Monthly had the pleasure to speak with Inês de Almeida Albuquerque, Partner at Travassos Albuquerque & Associados to give us some further insight into this transaction:

Please tell us more about INTG and your role in advising them on the launch preparation.

INTG is a group of companies dedicated to the distribution of tobacco products in Portugal. INTG partnered with BAT and we have assisted the whole procedure, from the contracts that were agreed between the parties and other third parties related to marketing, distribution and allocation of resources. The meetings were always carried out between the designated teams and we had a seat at the table in every aspect of the project and with the different teams. All decisions and evaluation of liabilities and opportunities were challenging and given the speciality of the product, the market and the applicable laws and regulations, we will keep working for the success of both companies in the Portuguese market.

How did you tackle issues arising from the need to communicate between multiple different entities during the launch preparation process?

Our philosophy as lawyers is to take on every client’s project as if it were our own. We consider ourselves partners and the client’s success is our success. Therefore, either with BAT’s team, the competent authorities or other advising legal teams, we approached every challenge with the scope to find a solution that would meet both ends. This product will generate an important revenue for both companies and entailed a high risk and a considerable investment both in capital and human resources, so all involved parties wanted it to succeed. You just need to place yourself at that aim. Our role as lawyers was to point out the issues and limitations, but work around a comfortable solution for the goal set – which I believed we have accomplished.

Our philosophy as lawyers is to take on every client’s project as if it were our own.

What bearing did Law 37/2007 and GDPR have on the compliance side?

The limitations and legal frame are very strict in every aspect. From the packaging to the publicity that is allowed, from the very approval of the product to be marketed in Portugal to the relationship between professionals and the end user, we had to say no to many brilliant ideas and strategies. The EU regulations – as well as the Portuguese – will not allow a tobacco product, which is outlined in a very narrow sense, to be advertised or promoted to consumers. And as we know, marketing is an essential part of any business launch.

The GDPR, regardless of the type of product we are dealing with, has a specific layout thriving in Portugal, from Law 58/2019 of 8 August. Considering that this product consists of two different parts (and, actually, two different products) – the stick under the label NEO® and the device under the label GLO® – it was required to allow the consumer to try the device, to be able to responsibly and knowingly decide. The specifics of borrowing such a device for a 14-day trial period has a major context in GDPR. Also, every contract with any third party, from retailers to services providers, must ensure that either the direct commercial link or the subsequent contacts with the consumer are covered by GDPR. For that purpose, we had to adjust a lot of written information and pre-contractual and contractual obligations.

What other challenges were you required to overcome?

The corporate governance scheme and internal relationships were also scrutinised to ensure that all was done by the book. The range of the distribution itself and the commercial objectives were ambitious, and it took a significant effort to secure every liability and risk emerging from the operations and the necessary high flow of new contracts being signed. Therefore, besides the major issues emerging from Law 37/2007 and GDPR, the smallest issues were quite relevant as well. The secret of the success for a new enterprise such as this one is to think ahead of the smallest grain that might get in the gear ahead and work the documents and related parties’ expectations around those possibilities. This was only possible because we have a very close relationship with the client and know them well.

How did your work on this transaction help you to deepen your expertise in the tobacco industry?

The legal framework has existed for almost 15 years, but the Law was amended in 2015, 2017 and 2021. We have been working with tobacco and tobacco-related products for a few years and with every new challenge we learn something. The experience we have gained helps us to better understand how the competent authorities will approach a certain product or procedure. This transaction began with an idea, a vision.

Do you expect to undertake further work in this sector in the near future?

We will keep assisting INTG and other clients that work in this market, in the most transient parts of the sector. As stated above, we are proud partners to our clients and we try to revive the traditional role of the lawyer as the adviser, the person who is always reachable and approachable.

I am a partner at Travassos, Albuquerque & Associados and started this project in 2014 alongside my partner, João de Travassos, with the perception that our contribution shall always have a pinch of our own personality and character. We have an amazing team working with us, but we maintain a straight and continuous relationship with the clients we coordinate. Considering this project, for example, it is just getting started. I believe it will be – and has already been – a huge success and, with the spread of the products in the market, there will always be new and defiant legal issues. And I will keep answering my phone.