The second-largest pet shop chain in Brazil has acquired the entire share capital of Zee Dog, continuing its meteoric expansion. 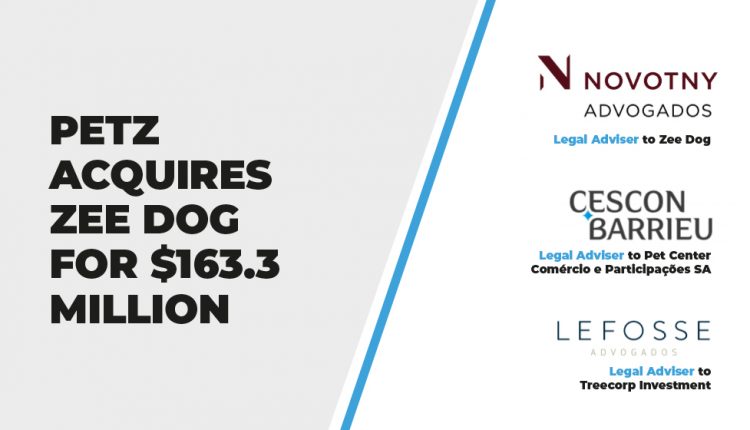 Petz, Brazil’s second-largest pet shop chain, has continued its expansion with the acquisition of the entire share capital of Zee Dog for $163.3 million. The deal includes Zee Now Pets Product Trade, Zee Dog LLC, Shenzen Zee Dog Business Co. Ltd, Zee Dog BV and Lolopet Alimentos Naturais SA, subsidiaries of the target company. Petz will pay the agreed amount in two instalments, the first consisting of $117.3 million dollars with 87% paid in shares and the remaining 13% in cash. The remainder will be paid in the next five years. This transaction, which remains subject to regulatory approval, will see Zee Dog shareholders receive a 5.7% stake in Petz.

The parties signed a purchase and sale and merger of shares agreement on 2 August. Novotny Advogados advised Zee Dog and most of its shareholders, with the exception of four investment funds that were advised by Lefosse Advogados. Cescon, Barrieu, Flesch & Barreto Advogados supported Petz in the structuring and negotiation of the transaction.

An Interview With Gabriel Corrêa at Novotny Advogados

Can you tell us more about your team’s involvement in this transaction?

Acting as Zee Dog’s lawyers for over four years and having directly participated in the investment rounds prior to the transaction with Petz, our team could actively contribute in negotiating the corporate and tax structures and conditions of the deal with Petz, drafting the relevant legal documents, but also in the internal negotiations between the various shareholders that make up the company’s shareholder base. Our knowledge of the company and its business was also very helpful in the due diligence carried out by Petz on Zee Dog and its assets.

Why was this a good deal for the parties involved?

The acquisition of Zee Dog brings a number of benefits to Petz. In the last years, Zee.Dog has not only become a strong and internationally recognized brand, but also developed a disruptive pet platform, a number of innovative products and solutions for the pet industry and diversified sales channels. On the other hand, the deal brings value to Zee Dog’s shareholders, and allows Zee Dog to benefit from Petz’ more than 140 stores in all regions of Brazil, an Omnichannel benchmark platform and from the expertise of Petz’ team on the execution and operational performance of the business.

How does the deal reflect the current state of the retail market in your jurisdiction?

By allowing a greater number of consumers to have access, through different channels and often, through a simple click on an app, to a wide range of products for their pets, the deal reflects the trend of digitization and innovation of the retail market, which was already booming and was further driven by restrictions imposed by COVID-19.