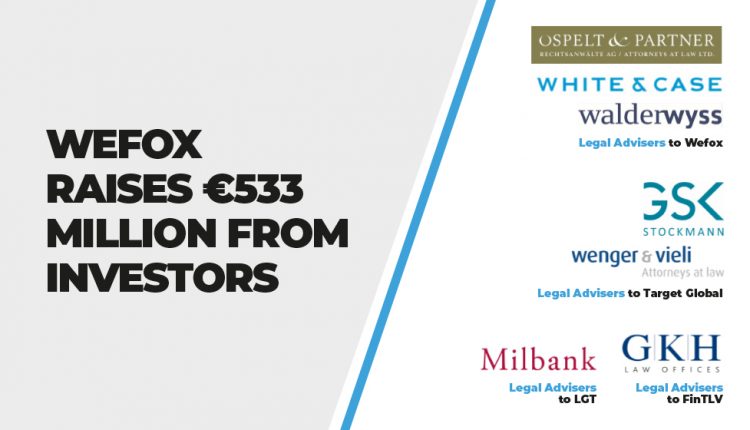 Insurance start-up Wefox has raised €533 million from investors. This financing round is estimated to be the largest ever undertaken by an insurteh company. Wefox, founded in 2014, has seen its valuation rise to €2.5 billion.

The investors taking part in the latest funding round are led by Berlin-based venture capital firm VC Target Global, which has also co-financed start-ups such as Auto1 and Delivery Hero. The investor decided not only to increase its existing stake, but to lead the financing round. Other new investors include FinTLV, Jupiter, LGT and Partners Group.

Wefox was advised on due diligence and Corporate and M&A matters by Alexander Ospelt and Judith Hasler of Liechtenstein-based law firm Ospelt & Partner. Taylor Wessing and Walder Wyss also advised Wefox. Target Global was advised by GSK Stockmann and Wenger & Vieli, and LGT and FinTLV were advised by Milbank and Gross GKH respectively.

What are your main concerns when advising a company on a fundraiser?

The main concern is that no funding is the same. The best template is of no use if you are not able to adapt it to the parties’ ideas and meet their concerns. As an advisor to a party, it is also essential to develop the right instinct between relentlessly representing the party’s interests and finding a compromise, since it is obviously not in the interest of the parties if the deal fails due to a small detail.

How do you work through these concerns to make sure that the financing round goes well?

This may sound old-fashioned, but nothing beats a face-to-face meeting. Even if digitalisation has opened up various possibilities in terms of electronic communication, which Ospelt & Partner of course also appreciates, there is still a need for personal meetings, because digital communication also means an increased risk of misunderstandings and ambiguities.

Do you expect to work on similar fundraisers in the future?