Lease Agreement for the Old Lloyds Bank Building in Chopwell

A lease has been agreed for the old Lloyds Bank building in Chopwell, Gateshead, allowing the next phase of its redevelopment to commence. 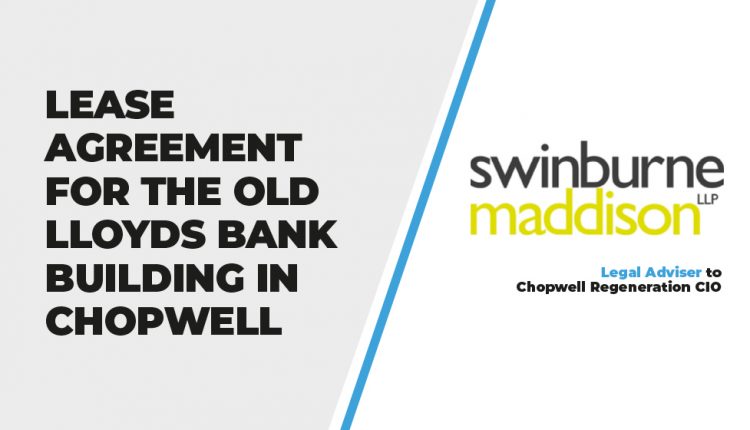 A lease has been agreed for the old Lloyds Bank building in Chopwell, Gateshead, allowing the next phase of its redevelopment to commence. The site on Derwent Street is set to be transformed into an enterprise and welfare centre that will be known as The Bank. Work on the project began in April and the facility is expected to be fully functional by October 2021.

Swinburne Maddison’s real estate partner, Victoria Walton, commented: “Although Swinburne Maddison has an increasingly prominent region-wide stature and reputation, we are committed to achieving the best possible outcome for every client – whatever their size or financial standing – including charitable enterprises such as this.

“We were delighted to be able to help lay the foundations for an organisation that looks set to make such a positive social contribution within this part of Gateshead, which is desperately needed.”

An Interview With Victoria Walton, Partner and Head of the Commercial Property team at Swinburne Maddison LLP

What key knowledge did Swinburne Maddison contribute to the lease agreement?

With a strong background in all types of landlord and tenant matters, including vast experience in the social housing sector, our team was very well placed to deal with the lease agreement on behalf of Chopwell Regeneration Group. Because of the client’s charitable status and associated funding structure, it was also necessary for us to draw on our experience in the charitable sector and to be particularly mindful of the specific statutory restrictions that affect charities.

What social impact do you expect this deal to have?

Like so many former mining villages in the region, Chopwell has still not recovered from the pit closure in the 1960s, with issues such as unemployment and food poverty extending far beyond ex-miners. The Bank will deliver services such as a “pay what you can” café and community fridge, as well as providing opportunities for people to learn new skills, gain qualifications and participate in a range of activities and events. The social impact of all this is going to be immense.

Do you expect to work on similar deals in the months ahead?

Yes, we actually have a number of similar deals ongoing right now, including the grant of a lease for another CIO looking to build a community centre on the outskirts of Durham city centre and a lease renewal for a local clothing bank. Whilst there are obviously questions regarding why some of these facilities are needed in the first place, we are proud to play our part in contributing towards the progress, development and wellbeing of the local community.