Advised by Linklaters, DATA4 has raised a record €620 million in debt financing. 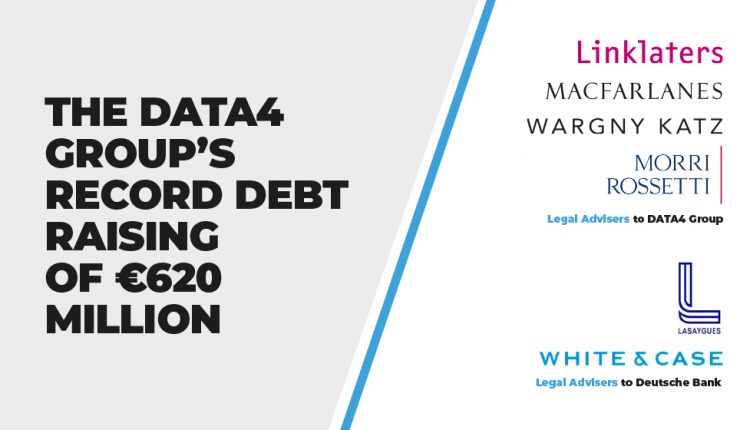 Paris-based data centre operator DATA4 has raised a record €620 million in debt financing. The DATA4 Group now has access to almost €1 billion to fund and execute its 2024 growth plan, with the aim of doubling its turnover in five years and becoming one of the European leaders in the data centre market.

The financing was secured from three banks: Deutsche Bank, Société Générale and SMBC. These additional resources will enable the Group to accelerate its responsible growth strategy throughout Europe – which involves doubling the power capacity of its Paris campus from 100MW to 200MW – making it the most powerful data centre campus in Europe. DATA4 also aims to significantly develop the number of data centres on its current campuses located in France (Marcoussis), Italy (Milan), and Spain (Madrid), and to expand into Central Europe and Scandinavia.

An Interview With Linklaters, Legal Advisers to DATA4 Group

How long has your firm been working with the DATA4 Group?

We have been working on the asset for almost ten years, having particularly advised AXA IM Real Assets at the occasion of its entry to the share capital of DATA4 in 2012 and, more recently, on the acquisition by AXA IM Real Assets of the entire share capital from Funds managed by Colony Capital in 2018. This transaction was led by Nicolas Le Guillou (M&A Paris), Edouard Chapellier (Tax, Paris), Nicolas Gauzès (M&A Luxembourg) and Melinda Perera (Capital Markets and Banking Luxembourg).

We have been delighted to continue following the history of the Group within the context of this important step in the company’s development (as stated by the CEO of DATA4) with the €620 million in debt financing, on which our firm has been assisting the Group. The team was led by Melinda Perera as a matter of Luxembourg law alongside De Pardieu Brocas Maffei as a matter of French law, with a team led by Yannick le Gall (Real Estate Finance).

Our Paris M&A team, led by Nicolas Le Guillou and Jacques Mazé, has assisted the Group in parallel on the Group’s presentations to lenders to facilitate their understanding of the Group legal structure.

What expertise did your team bring to the table?

Given our longstanding relationship with DATA4 Group, we combine a deep knowledge of the objectives, needs and constraints of the Group with our legal expertise.

What issues have the potential to arise when advising a company on a case like this?

Given the magnitude of the borrowing (€620 million) with Deutsche Bank, Société Générale and Sumitomo Mitsui Banking Corporation, it was key to find the right balance between the strategic objectives and investment expansion targeted by the DATA4 Group in Europe and the contractual terms of the financing documents, including the security package in favour of the external lenders.