GKC Partners in association with White & Case advised a consortium of lenders. 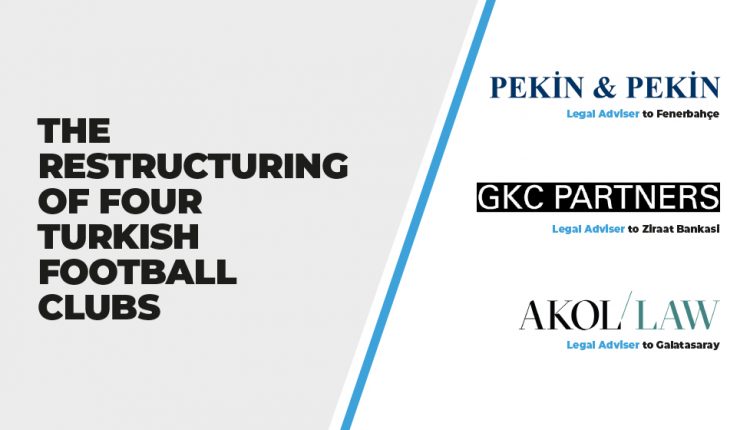 An Interview with Pekin & Pekin, www.pekin-pekin.com

Please share more about your involvement in this deal.

We provided legal support from day one starting with general advice, as the financial restructuring concept regulated recently by the BRSA1 and precedents are very limited compared to customary refinancing & restructurings. Therefore, this is a milestone deal in the Turkish market. Our involvement was not limited to the financial restructuring but to oversee the whole process, including tax and group restructuring issues as Fenerbahçe group is quite complex compared to other clubs consisting of one publicly traded company and 11 group companies in different regulated/unregulated sectors, which required utmost attention.

Lastly, BoD liabilities had to be dealt with meticulously under the documentation in a way to limit the same to the extent permitted under Turkish laws and parallel with consortium requests.

Did any challenges arise along the way?

The main challenge was to ensure the whole restructuring worked in general and within itself from different aspects, in particular managing the security package, whilst keeping Fenerbahçe group’s cash management at feasible levels. Intra-group restructuring was another hurdle that had to be juggled around for the successful closure of the deal.

Negotiations took almost one year and had been quite challenging due to various hurdles resulting from economic distress in Turkey, COVID-19 effects and measures, rapid legislative changes as the documentation had to be tweaked several times in a way to leave room for manoeuvre for a post-COVID-19 term.

Lastly, BoD liabilities had to be dealt with meticulously under the documentation in a way to limit the same to the extent permitted under Turkish laws and parallel with consortium requests.

How did you navigate them with your team?

We have a strong Banking & Finance team led by Eda Beltan, that has a deep expertise on not only restructurings, but all kinds of financings in general with a practical and business minded approach which allowed us to close this deal smoothly by offering effective solutions and amicable negotiations.

What banking and finance issues commonly arise during restructuring?

In similar restructuring projects, management of securities is one of the most important and crucial issues as it directly affects cash management throughout the restructuring term. It was quite challenging to meet consortium security package requirements whilst keeping Fenerbahçe group’s balance sheets operative and ensuring the cash flow that is required by the group to continue the activities as is. In this deal, part of Fenerbahçe’s debts are re-financed by new cash loans and are used to pay off the existing outstanding loans and the remaining amounts are restructured by modifying the tenure and interest of such existing loans. This dual structure was specifically challenging as security interests are accessory to the underlying debt and terminate once such debt extinguishes. In this respect,  perfecting new securities as transition and continuance structures for existing securities to be extinguished as a result of refinancing had to be carefully elaborated on and tailored under the restructuring documentation in detail.

It should be also noted that, even though this restructuring has allowed the respective football clubs, including Fenerbahçe, to manage their finances in the near future, solutions that are more effective shall be considered and put into effect for the continuation of their growth over in the long run.

Are there any issues unique to the sports industry?

The profit and loss statement of sports clubs is so unique and therefore, it is vital for regulatory authorities and/or creditors to control team expenses (i.e. transfer payments, agent fees and player wages). Additionally, since profits and losses of sports clubs are so stable and easy to calculate based on sporting results, there are unique limitations under the restructuring agreement for the sports industry in order to prevent financial leakage from the clubs by transfer, player and agent expenses.

During negotiations, a new tax amnesty came into force enabling tax debts restructuring and the restructuring agreement had to be revised in a way to enable football clubs to benefit from the same to ease tax debts payments over a reasonable time.

In addition, revenues allowed by the UEFA and TFF had to be separated and the budget requirements had to be construed accordingly.