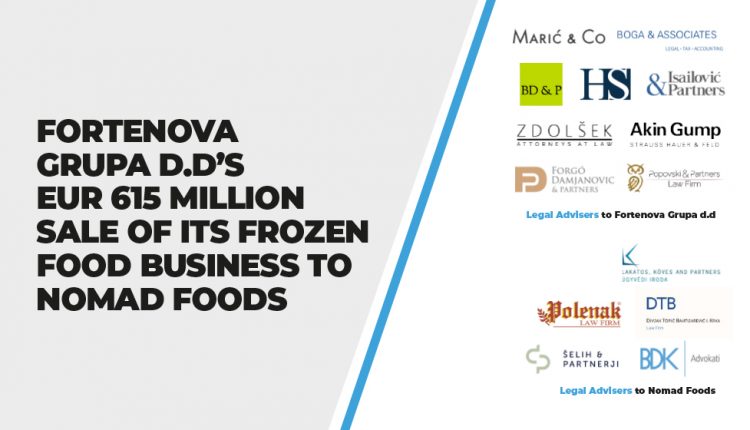 The value of the transaction is EUR 615 million, on a debt-free, cash-free basis, with completion planned for Q3 2021. Upon completion, Nomad Foods will become the owner of FFBG which comprises a leading European frozen food portfolio of iconic local brands with strong consumer awareness in Croatia, Serbia, Bosnia & Herzegovina, and several other countries in South East Europe (SEE). With more than half a century of tradition, the FFBG is the largest producer and distributor of ice cream and frozen foods in its respective markets.

“This is a transformational transaction for Fortenova Group with all the funds to be used to deleverage the Group and deliver a Fortenova Group that is, after many years, financially strong and able to fully invest in all its businesses”, said James Pearson, Fortenova Group’s Chief Financial Officer.

An Interview With, Isailovic & Partners, Adviser to Fortenova Group d.d.

What were specific Serbian legal aspects the seller needed to be aware of?

Certainly, the Seller needed to keep in focus two main Serbian legal aspects when approaching this transaction. Firstly, the fact that local entity as part of FFBG was substantially involved in the previous Group’s internal relations (both financial and operational) with some non-core assets still in the target’s portfolio. Secondly, in comparison to the legal systems governed by common law and most of the EU legal framework, Serbia recognises quite specific legal institutes when it comes to the title over real estate (e.g. right of use over the construction land) which is a fundamental issue in an M&A transaction like this. Careful group restructuring and considering constraints of the local legal framework had to be planned to address these aspects timely and properly.

Was there anything unique about this particular deal?

It should be noted that Fortenova Group established its business operations in April 2019 with the implementation of the Settlement between Agrokor’s creditors in one of the most specific and complex legal cases ever to be done in the region. One would argue that it would take years only to consolidate your own governance and operations, but to be able to sell FFBG in a deal like this to Europe’s leading frozen food company only two years later is quite unique and a tremendous success for all participants in our opinion.

What issues have the potential of arising in a deal like this? How did you avoid them?

When the seller is considering the divestiture of a part of its business which is located in several jurisdictions, some of them being non-EU, and the buyer comes from a common law legal system, there is an indefinite list of issues that could arise in both the agreeing and the implementing phase. Proper cooperation and understanding between local and international advisers, as well as with the seller’s own team, was key to the success from the very beginning. Punctual communication through pre-agreed streamlines, being understandable in providing the local legal inputs and keeping up with the pace of the transaction will bring you closer to the goal. We are glad that our team led by Nikola Rodic – senior partner, Andrija Djurovic – partner and Ana Ivanovic – lawyer -, managed to cope with all challenges and contributed to the successful signing of the SPA.