Rakuten Inc. has completed the acquisition of Fillr, the world’s most intelligent autofill service. 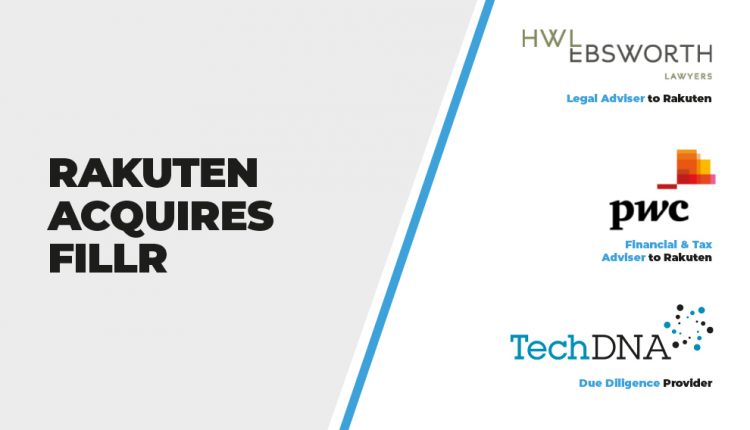 Based in Melbourne, Australia, Fillr powers tens of millions of transactions monthly for the world’s top e-commerce, fintech and ‘buy now, pay later apps, including for Rakuten’s shopping rewards and Cash Back destination in the United States and Canada. Terms of the acquisition, led by Rakuten Americas on behalf of Rakuten Inc., were not disclosed.

The Fillr autofill platform grows shopper conversion rates by simplifying registration and checkout processes. When shoppers were offered autofill functionality with Fillr integrations instead of manual typing, they were up to 120 per cent more likely to convert and average revenue per user increased by nearly 20 per cent.

The acquisition solidifies the continuing relationship between Rakuten and Fillr. The companies are longstanding partners with strong product synergies and mutual goals of accelerating transactions, boosting conversions and growing customer lifetime value. Fillr autofill was integrated into the Rakuten iOS mobile app in 2018 and its Android mobile app earlier this year.

What is tech due diligence?
Tech due diligence (TDD) ensures a target company’s technology is actually as good as claimed. The most common tech we evaluate is software, IoT hardware, and machine learning / artificial intelligence algorithms.

How often does TDD reveal issues that affect the deal?
Most of the time. For about 9%-13% of transactions, TDD reveals issues so large that the deal falls apart. The rest of the time, TDD affects the deal in some way: pre-close remediation requirements, post-close remediation priorities, headcount adjustments, new tech leadership, holdbacks, open source licence fixes, etc. Our work often significantly recalibrates post-close roadmaps to better align with the reality of the code-as-built, not the code-as-wished-for.

How does TDD intersect with legal due diligence?
Basically, TDD is the ‘ground truth’ for legal analysis that relies on accurate descriptions of what the code actually does, not what programmers think or report it does.
* Privacy: TDD reveals how personal data / personal information / PHI / etc. is actually processed and secured.
* Open source licensing: TDD uncovers how code is actually used, which is the first step in quantifying licence liability.
* Patent: TDD reveals which claims in a patent are implemented in code.

How long does Tech Due Diligence take?
About 2-3 weeks. It’s not uncommon for the phone to ring and
the project to start within the next day or two.

Who hires you?
Our clients range from the largest and most active acquirers in the world down to one-off buyers making their first tech acquisition. A majority of our work is for Fortune 500 and PE firms.

What size companies do you assess?
We assess companies of all size. They might be small startups with only one or two engineers leveraging the latest and greatest tech (or so they claim). Or they might be entrenched industry players worth many multiple billions with hundreds of engineers all over the globe. And we assess everything else in between.