The Law Commission: E-Signatures Are Equal to Handwritten Ones 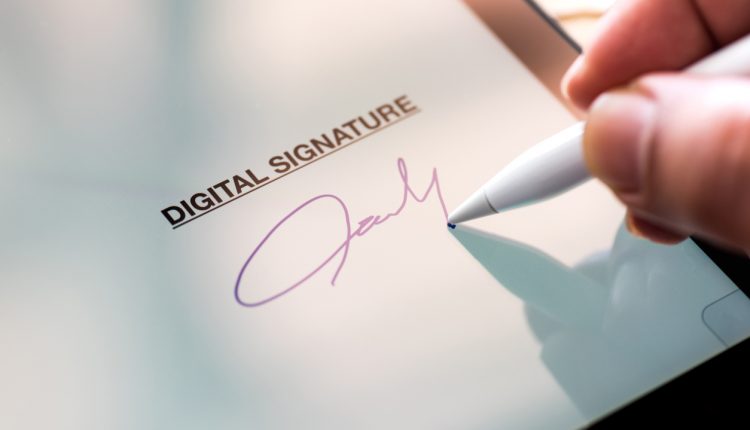 When the Statute of Frauds 1677 stipulated that contracts must exist in writing and also bear a signature, the practice soon became commonplace. But the traditional written signature may soon become a thing of the past: The Law Commission has decided that, for many legal documents, it can be replaced with an electronic signature (‘e-signature’) instead. Below Daniel Watson, Associate at Hunters Solicitors, gives Lawyer Monthly the rundown.

The Commission’s latest guidance states that e-signatures are to be regarded as equivalent to handwritten ones. From a business perspective, their decision has obvious practical advantages: it will enable contracts and other commercial documents to be signed and circulated much more quickly, notably in cross-border matters where the signatories are invariably in different countries. However, it could also have implications for other forms of legal document, not least Lasting Powers of Attorney (LPAs).

The pivotal issue is that the mere typing of a name or an email header could become treated as a signature. Inevitably, this raises alarm bells in terms of fraud prevention. Outside a business context, where cybersecurity is paramount, control over the use of e-signatures in a personal capacity is often limited, meaning that there is no way to verify an authentic e-signature independently. Contrast this with a manuscript signature, which should be readily identifiable as unique to the person who makes it, sometimes supported by an independent witness.

E-signatures take various forms: a name can be typed, a click made on the “I accept” button on a website, a finger signing on a touchscreen, and a password or PIN can also be used. A consultation has been opened by the Commission as to whether a new law is needed to enshrine the validity of e-signatures, although it has stated that it is “not persuaded at present” that this is necessary because of their view that the law already provides for the validity of e-signatures in England & Wales.

The Commission takes the view that, under current law, an e-signature is capable of meeting a statutory requirement for a signature ‘if an authenticating intention can be demonstrated’. This will raise evidential issues of intention where there is any dispute as to the authenticity of a signature. Given that a manuscript signature requires no such evidence, the efficacy and putative efficiency of using an e-signature could be questioned. As the potential for dispute increases, e-signatures could therefore be more burdensome than envisaged.

The decision could lead to particular difficulties in relation to LPAs since these documents must be signed and witnessed in a specific sequence in order to be registered by the Office of the Public Guardian. Evidential difficulties could arise in attempting to demonstrate that the procedure was correctly followed where the signatures were written electronically.

The Commission’s view that an e-signature is capable of meeting a statutory requirement for a signature does not extend to the signing of Wills under the Wills Act 1837. It is conceivable, however, that the Commission’s decision will increase the likelihood that this could be subject to change in future, particularly in light of the recent decision in Payne v Payne, in which it was confirmed that a witness to a Will does not need to sign it in order to witness it effectively. Instead, a witness merely has to write their name on the Will with the intention of witnessing it.If the Wills Act is amended to allow for Wills to be signed electronically, it could raise huge scope for potential abuse, particularly where vulnerable or elderly individuals are making a Will.

It is likely that The Commission’s decision will pave the way for a more widespread use of e-signatures, as does its suggestion that witnessing signatures via webcam or Skype may occur in the future (although this is not currently legally permissible). Any such move should be carefully scrutinised to ensure that it is workable from an evidential perspective, and to safeguard against abuse.

The obvious potential benefits of e-signatures should be balanced against the potential evidential burdens and the need to safeguard against abuse. If the use of e-signatures is rigorously controlled, the issues raised above should not be insurmountable.