Partner Churn and Retention at US Law Firms in London 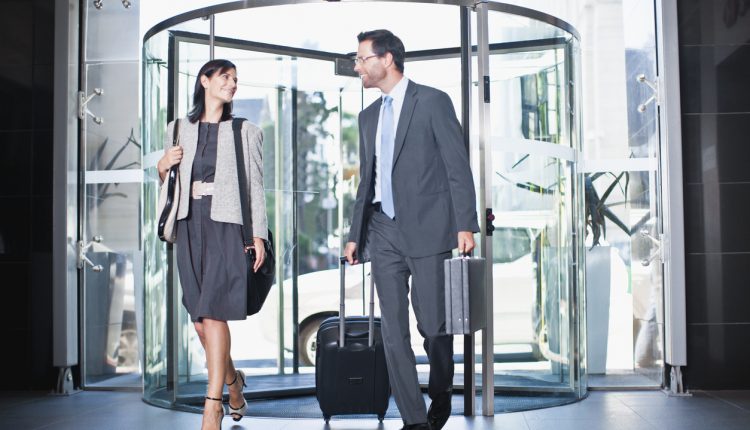 Authored by Fraser MacLean, Executive Legal Search & Management Consultant at MacLean Legal Search, the below piece looks at partner movement (churn) and retention at the London offices of some of the largest US Law Firms by revenue since 2015. It follows on from Fraser’s recently published detailed summary on the same group over the same period.

The term “revolving door” is used to describe a Law Firm where there is a high or above average turnover of lawyers. This usually underlines a problem within, be it with culture, direction, leadership, management, remuneration structure, strategy, internal processes, personnel and choice of recruiters.

Any reputational or structural damage associated with heavy partner losses is tempered slightly if there are equal numbers moving in both directions. Worst case scenario is when the numbers exiting far exceed those arriving.

The table below summarises the local lateral partner hires and losses at a selection of US Firms since 2015. I have only compared the movement of locally qualified partners. I have not included partners who split their time between offices, who have retired or who have exited without taking up another position. Obviously the numbers are fluid and relate to publically available data at the time of writing. 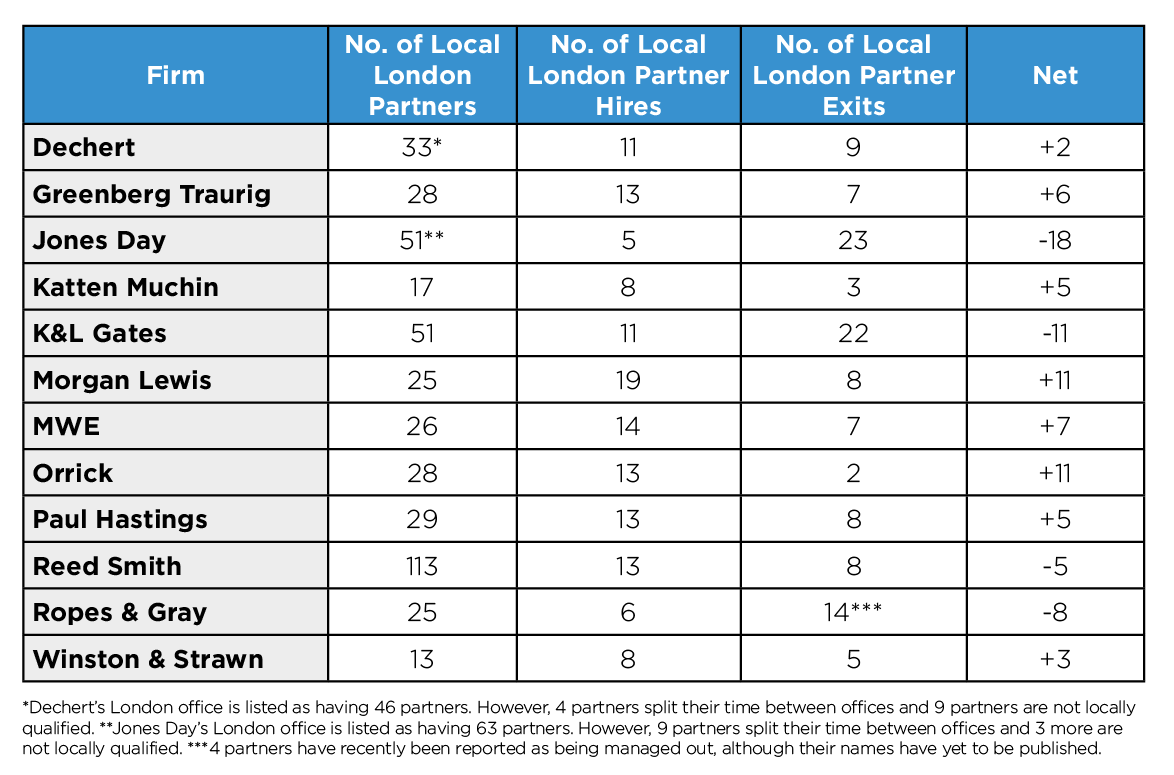 The majority of the seventy-one Am Law 100 Firms with an English-law capability have offices with less than 20 partners. You will see from the list above that several big and highly profitable brands fall into this grouping. Their London offices have shown slow incremental headcount growth over many years and there are no signs that this is going to change in the near future.

These Firms have generally been far more active in growing their London numbers than the previous grouping. I have already analysed and commented on Cooley, Goodwin, King & Spalding, Proskauer and Ropes & Gray in my previous post.

Morgan Lewis stands out as one of the most active and ambitious hiring Firms since 2015, with the recent triple corporate partner hires from Herbert Smith confirming the same. Orrick comes a close 2nd. Two of their most recent hires, corporate partners, James Connor and Daniel Wayte, were counsel and special counsel at their previous Firms. Hiring young partner talent may be part of their strategy (although I did read a quote from Erik Dahl describing these hires as opportunistic), but equally it may also be an indication of how difficult and expensive it is to hire experienced corporate and private equity talent. It also has one of the lowest number of partner exits along with Paul Hastings. Their Head of Corporate in London, Hilary Winter, left the partnership earlier this year.

Akin Gump has to date successfully absorbed and integrated twenty-one partners from the dissolved Bingham McCutchen. I believe nineteen are still there. Having opened their London office in 1997, this represented a sea change in their approach to London.

Dechert has seen modest partner growth and steady churn. What does stand out is the quality of the Firms they have hired from including Clifford Chance, Kirkland & Ellis, Ropes & Gray, Skadden and Sidleys.

Sidley has also been through an active lateral hiring period since 2015 with the headlines being the six partner private equity team from Kirkland & Ellis in 2016 and the promotion of private equity lawyers, Till Lefranc and Wim De Vlieger, associate and counsel respectively, at Simpson Thacher to salaried partner. Five of these hires were lawyers who were US-qualified only and very few other full service US Firms in London do the volume or value of work in London which requires this number of US lawyers to be based here.

Jones Day has the worst net churn of any US Firm. Eight of the twenty-three partner exits left within four years of joining.

Kirkland has gone from strength to strength. Since 2015, they have promoted twenty-seven of their own associates to partner, laterally hired at least fifteen senior associates as partner, and made at least thirteen partner laterals. Of the forty-two associates either promoted internally or laterally hired, ownly four have left to join other US firms, Dechart (one), Fried Frank (one) and Sidleys (two). Unprecedented numbers but also a large pool of salaried partners for other firms to go after.

K&L Gates has one of the highest negative churn rates. Since 2015, they have lost over twenty partners which amounts to over 40% of their current local London partner headcount. One third of these exits stayed three years or less.

Reed Smith has had over fifty partners coming and going since 2015, the most of any US Firm. Around a quarter of their exits stayed three years or less.

For most of the Firms listed above, a great deal of effort, money and time is spent hiring lawyers. You would therefore hope and expect every practical and professional step is taken, within reason, to ensure that 1) they hire the best lawyers that are available and affordable and 2) they become successful additions to the partnership over many years. Hmm.

It was a generally held view that most laterally hired partners at Law Firms needed to stay put for at least three years to repay the cost to hire and remunerate them. And at least five years to make a positive financial contribution to the partnership. Therefore, any partner who left within three years was generally regarded as a bad lateral hire for the Firm. Short-term stays are also not great for the partner’s CV either.

With Firms now managing out non-performing partners more and more, it’s not as easy to determine whether it’s the partner or the Law Firm who are cutting their losses.

Most Firms have made and will continue to make a bad hire(s). A fact of life. It’s multiple exits which set the alarm bells ringing. The causes will vary from Firm to Firm and have been well documented. I have referred to several of them in my introduction.

One of the major differences between US Firms and their UK competitors is where the decision makers are based. This has reportedly been a major cause of partner churn over the years. Typically the associated reasons, which I would label under the term “satellite office syndrome” can be summarised as:

This piece summarises several aspects of partner churn. However, it is not exhaustive.

I would hope that all MPs, departmental heads and senior HR appreciate the importance of monitoring and understanding their own partner churn (obviously), but also that of their competitors.