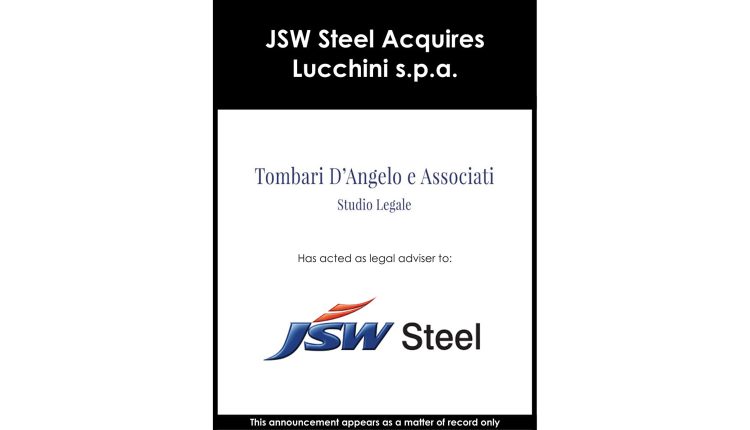 JSW Steel Italy S.r.l. (subsidiary of JSW Steel Limited) has entered into a Sale and Purchase Agreement (“SPA”) with Cevitaly S.r.l (“Cevitaly”) a company governed by the Italian law, for acquisition of 100% shares of Aferpi S.p.A (“Aferpi”), Piombino Logistics S.p.A (“PL”) and 69.27% of the share capital of GSI Lucchini S.p.A (“GSI”) (jointly referred to as “Targets”), for a cash consideration of Euro 55 Million on a cash free, debt free basis (the “Transaction”) subject to closing adjustments including for working capital of the respective Targets. The above facilities are located in Piombino, Tuscany Province, Italy. The Transaction is subject to fulfilment of conditions precedents and other customary terms generally applicable to such transactions as per the SPA.

The Transaction is proposed to be funded through a combination of internal accruals and debt at the Targets.

What challenge arose? How did you navigate them?

The transaction was undoubtedly characterised by a high level of complexity, which can be explained by reference to two main issues: the particular legal framework governing it and the combination of numerous parties both private and public entities, all involved at different levels in the process.

More in particular, one challenge we faced was that the seller had formerly bought the target companies under the legal “umbrella” of the insolvency regulation of the extraordinary administration of large companies, which, inter alia, imposes specific duties on the buyer under the supervision of the Commissioner, in this case guaranteeing the continuity of the business and maintaining the same workforce. Those issues needed to be dealt with on a separate and contractual basis in the context of the new acquisition.

In addition to this, as far as the environmental aspects are concerned, the transaction had to take place under the special legal regime of the Legislative Decree 152/2006, which envisaged the execution of a new general programme agreement with all the Public Institutions involved.

What was one lesson you learnt after working in this transaction?

Our law firm and our team were involved as legal adviser to JSW in order to assist the client in the negotiation of all relevant agreements to be executed with the Lucchini Extraordinary Administration for the purpose of the acquisition.

One of the most challenging parts of this experience was certainly to harmonise and integrate those agreements into the  whole M&A process, which implied a tight and efficient coordination with all other advisers involved in the transaction.

Please tell me about the current M&A field in Italy and how this deal reflects it?

From a general point of view, the analysis relating to the first nine months of the year shows a non-negligible increasing trend in the Italian M&A field, featuring a significant number of large investments by international groups

In this context, the Italian steel industry is undergoing a major transformation which seems to indicate that there will be a greater concentration of production and see the involvement of international leading players, interested in strengthening and consolidating their position in the UE market.

Looking closer at the deal, we can observe that M&A and restructuring operations involving large companies that have recently gone through periods of corporate crisis have certainly played a crucial role in this scenario.