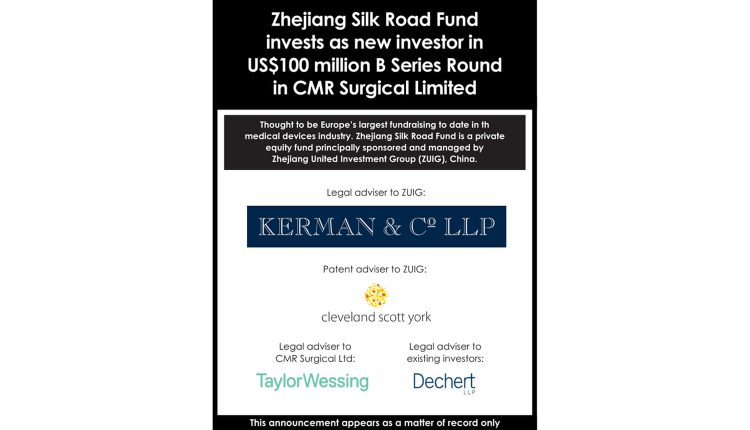 Cleveland Scott York undertook the IP due diligence in Europe’s largest ever medical devices funding round.

The firm undertook due diligence for private equity fund, Zhejiang Silk Road Fund, which is principally sponsored and managed by Zhejiang United Investment Group, China (‘ZUIG’) on the patent aspects of the group’s equity investment in CMR Surgical.

Fraser Brown said: “CMR Surgical’s patent portfolio was clearly crucial to the value of the company in the eyes of the investors.

“Our extensive experience in the engineering and medical devices sector meant that we were ideally placed to conduct the due diligence investigation into the extensive patent portfolio in this deal, which showcases our capability as a firm.”

Cleveland Scott York has offices in the City of London, Hertfordshire, the Thames Valley and Brussels.

What particular patent issues do you look out for prior to working on such a deal?

The key patent issues are:

1) Whether the company’s core technology is protected by pending or granted patents and,

2) The extent to which the company’s freedom to operate could be limited by pre-existing third-party patents.

We review the company’s approach to patenting innovations and identifying problem patents, as well as conducting our own substantive investigations, including the prospects for grant of pending applications and likely scope of protection to be conferred. Crucially the work plan must be feasible in terms of ambition, cost and available time.

Did any unexpected patent issues arise during the process? How did you work around this?

CMR has a very extensive patent portfolio, as does the current dominant player in the field. An initial screening process allowed us to martial resources towards assessment of key home and third-party patents. It was invaluable to have direct access to the company’s engineers and a laparoscopic surgeon who ‘test drove’ the surgical arm to critically and comparatively review its performance against competing systems.

For you and your team, what is a successful end to a transaction? How do you ensure you get there?

On the issue of assessing the commercial significance of home and third-party patents, we needed to identify the level of risk/reassurance with which the client was comfortable, and clearly explain any significant issues so as to allow the client to take informed decisions. Cleveland Scott York’s medical devices team, including three patent attorneys led by Partner Fraser Brown, Senior Associate Nick Bennett and Associate Dr Hazel Stewart were able to conduct the analysis to the required depth and within the demanding time frame. Success is to see our client’s investment interests aligned with the future success of an exciting and growing UK medical technology company.