Blowing the Whistle on the SFO 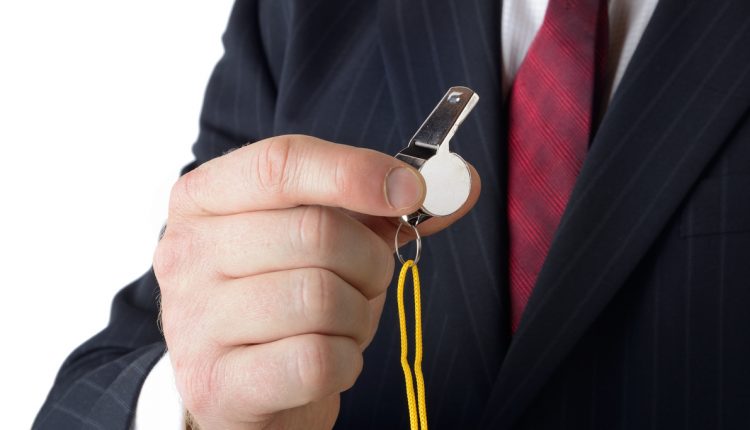 With ongoing discussions around the SFO’s operations, expert journalist & noted legal commentator, Dominic Carman, provides Lawyer Monthly with an outlook on the SFO’s own whistleblowing procedure, citing some concerns that in his opinion must be addressed.

The Serious Fraud Office welcomes whistleblowers. That is the message featured prominently on the front page of its website: “If you suspect wrongdoing in your workplace, you should follow the whistleblowing procedures in your own organisation. If there aren’t any or you are not comfortable reporting the matter internally there are a number of prescribed bodies to whom you can report in confidence. The Serious Fraud Office is one of those prescribed bodies and we would like to hear from you if the wrongdoing concerns serious or complex fraud, bribery or corruption in a UK company.”

But a whistleblower email sent to the SFO in July 2012 about its own conduct has provoked a rather different response over the last six years: the agency has persistently failed to respond to the central allegations contained therein. The email – sent to David Green who had recently been appointed as SFO Director – begins: ‘I am writing to you anonymously because I fear my career will be ended if I am identified.’ The author later explains ‘I cannot come forward publicly as my career would be ended.’

What follows is a summary of the email’s content relating to comments, allegedly made by Neil Gerrard, who was – and still is – a partner at the London office of the US law firm Dechert. “Even if partially true they (the comments) make a mockery of the operational independence of the Serious Fraud Office and its ability to effectively investigate,” the email states.

It proceeds to recount how the anonymous author had been in the company of “a fairly large group” comprised mainly of lawyers. This included Gerrard, who, it is alleged, was “worse for wear” when he made a number of assertions about the SFO in general, including key personnel and David Green. The email then catalogues allegations relating to Gerrard’s conversation.

In response, a spokesperson for Dechert commented: “The allegations in the letter are entirely without foundation. They were investigated by the SFO at the time and no action was taken. Dechert LLP categorically reject all of these allegations.”

Gerrard claimed to be receiving “insider information” from a man called “Dick” on companies and individuals that were subject to SFO investigations, referring to him as ”the only Dick a lawyer ever needed.” The insider information included allegations, copies of case notes and SFO investigation strategy which Gerrard then used to obtain instructions from the party being investigated. Three specific cases are mentioned – one of which Gerrard allegedly claims to have high-level contact in the relevant HMRC department whom he “did deals with.”

Gerrard further alleged that he was warned by the SFO that there was a multi-agency investigation into a number of leading law firms in London. He claimed that this, and other insider information, was provided with “the tacit agreement” of David Green and Dominic Grieve, who was then Attorney General.

As part of “the agreement” with the SFO, Gerrard alleged that he could guarantee that his clients would never be investigated and that he could change a criminal investigation into a civil settlement. He further claimed that via Miriam Gonzales, a fellow partner at Dechert, he had direct access to her husband, Nick Clegg (who was then Deputy Prime Minister), as well as to the heads of many European governments. As a result, Gerrard alleged that he had the ability to influence, and in some cases, change government policy.

Turning to the SFO, Gerrard allegedly claimed that the SFO was “inept and toothless” and could only investigate seven or eight cases a year. He described “in confidence” how he had been asked by Grieve to oversee and guide changes to UK regulatory strategy with the aim of giving the SFO the “kick up the arse” it needed.

Of Green’s then recent appointment, Gerrard allegedly said that he was “very much second choice” and that he (Gerrard) did not accept the post “this time round” because he could not afford “a pay cut”. He claimed that Green was “keeping the seat warm for him” and when he took over in 2016, Grieve had “guaranteed him £250,000 a year as a salary” – well above Green’s £150,000 – and an “elevation to the House of Lords as opposed to a knighthood” (which Green did, in fact, receive in 2018).

The email concludes: “Whatever the truth or otherwise a number of us were appalled that, despite being obviously drunk, he (Gerrard) should speak so openly, especially as it appears that he is receiving confidential and commercially sensitive information from contacts inside the Serious Fraud Office.”

The serious concerns raised by the email in relation to the conduct of a senior SFO member of staff (Dick), included the leaking of confidential information with the “tacit agreement” of the then SFO Director and the former Attorney General. It alleges that Dick colluded with Gerrard in a manner that was highly unethical, in clear breach of the Civil Service Code, and potentially giving rise to criminal liability. In short, there is an obvious public interest in such misconduct being uncovered.

So what has been the SFO’s response over the past six years to the various allegations contained in the whistleblower email? Not much, it would appear, despite repeated requests for information and meetings with Green and the Attorney General to discuss the allegations. But events have recently returned to the content of the email in the form of a Freedom of Information (FOI) Request from international law firm Hogan Lovells.

A lot has happened since 2012. Green, shortly to become Sir David, departed from the SFO in April and is set to join Slaughter and May. Grieve left the office of Attorney General in July 2014 as part of the Cabinet reshuffle. The new permanent SFO Director, Lisa Osofsky, assumes the role in September while the interim appointee Mark Thompson is separately alleged to have had “extensive interaction” with Gerrard including communications that are alleged to be “improper and unauthorised”. The new Attorney General, Geoffrey Cox QC MP, (successor to Grieve’s replacement Jeremy Wright) was only appointed in July by Theresa May following the Cabinet resignations of David Davis and Boris Johnson.

Neil Gerrard remains where he was: a London-based partner of Dechert and global co-head of the firm’s white collar and securities litigation practice. The FOI request affects him as much as it does the SFO. The concerns raised regarding the unhealthy nature of his relationship and interaction with the SFO – and the potential effect on a variety of SFO investigations – need to be addressed.

It is clear from subsequent events that the whistleblower email was never properly investigated at the time, not least because the SFO is now belatedly commissioning an investigation into it alongside other related matters. The SFO, therefore, should soon be in a position to respond in full to the questions raised – in particular, whether it followed its own whistleblowing procedures.

And if not, why not?