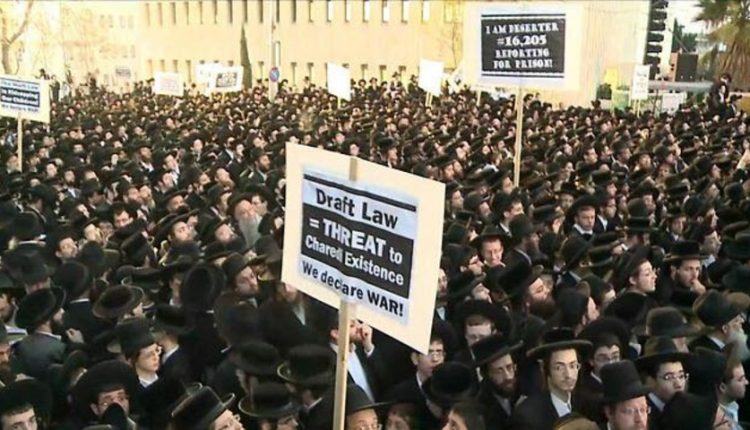 The demonstration was organized by the Edah HaChareidis – a Rabbinic umbrella association representing hundreds of Orthodox Jewish congregations with a combined membership of over 250,000. During the protest, leading Rabbis sharply attacked Israel’s conscription policy, passed in 2014, curtailing a 60 year old policy exempting all Yeshiva students from military service. Since then, many who refused to enlist were incarcerated for weeks and even months under brutal conditions. Those who peacefully protest those policies are subject to harsh punishments as well.

For instance, a father of seven, Rabbi Binyumin Friedman was recently incarcerated for peacefully protesting the draft. He was denied bail and is now scheduled to remain detained until the completion of his trial, which can take many months.

“The Israeli Army is an irreligious entity, and it is impossible for Orthodox Jews to fully practice their religion while in the army. We cannot serve in the army; because, the Torah prohibits us to create a state before the coming of Messiah… because, the Torah prohibits us to wage war against any sovereign nation!” declared Rabbi Issac Mark, the intergovernmental liaison for the Edah HaChareidis.

Forcing Orthodox Jews to serve in the army against their religious convictions violates Resolution 1989/59, passed by the UN Commission on Human Rights on March 8, 1988, Rabbi M. Weiss said. The resolution: “Recognizes the right of everyone to have conscientious objections to military service as a legitimate exercise of the right of freedom of thought, conscience and religion as laid down in article 18 of the Universal Declaration of Human Rights.”

At the conclusion of the demonstration, organizers declared that they will continue protesting until all confined in prison are released and while the current evil draft policy remains in place. The E.H. is determined to continue and ramp up the campaign to awaken the international community to Israel’s suppression of the religious freedoms of its Orthodox Jewish citizens.