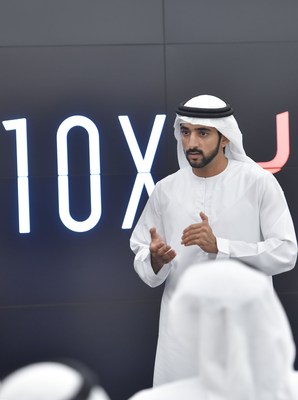 His Highness Sheikh Hamdan bin Mohammed bin Rashid Al Maktoum, Crown Prince of Dubai and Chairman of the Board of Trustees at Dubai Future Foundation, recently initiated planning for Dubai 10X with all of the Dubai government heads to position the Emirate 10 years ahead of all other cities.

His Highness stated, “Sheikh Mohammed no longer accepts being just number one, we want to be 10 years ahead of all other cities”.

His Highness Sheikh Hamdan said, “Traditionally, governments are known all over the world to be resistant to change and bureaucratic organisations that are last to adopt disruptive innovation. The future is a collection of ideas and ambitions that are made and tested in experimental laboratories, and 10X transforms Dubai into the world’s largest laboratory for governments of the future.”

The Dubai 10X sets the Government of Dubai on a mission to be 10 years ahead of all other cities – hence the name 10X (with X symbolizing experimental, out-of-the-box, future oriented, exponential thinking).

Placing Dubai 10X in context, His Highness Sheikh Hamdan stated, “The future belongs to those who affect radical changes, not those who make minor, gradual improvements. The future will not be as patient with us as the present. Today, I am calling on all government leaders and employees to embrace disruptive innovation and find new, creative and truly disruptive approaches and technologies to delivering their mission rather than incremental and minor improvements.”

His Highness further added, “succeeding in advancing 10 years ahead of all other governments requires all of us to adopt a culture of creative disruption, allowing not only our tools and systems to be enhanced, but also our mindsets, to be revamped, upgraded and open to embracing disruption.”

Dubai government entities are required to produce plans for three specific elements within one month:

His Highness finally added, “we want to achieve real, impactful and 10x happiness outcomes for society and establish a unicorn government that becomes a platform to deliver moonshots.”